The road to UFC Fight Night: Santos vs Walker has been anything but smooth for former UFC light heavyweight title challenger Thiago Santos.

After pushing then-champ Jon Jones to the brink at UFC 239 in 2019, Santos spent more than a year on the sidelines as he rehabbed from serious injuries in both his knees. It was a trying period for the Brazilian, but after the time away from the Octagon, he was determined to come back better than ever.

Unfortunately for Santos, his return to competition went completely different from what he had visualized. Santos was finished by perennial light heavyweight title contender Glover Teixeira in the third round of their fight inside the UFC APEX. Santos had his moments in the bout, but he was eventually overwhelmed and defeated by the veteran.

The loss to Teixeira was a tough pill for Santos to swallow, but he chose to focus his energy on a new target in Aleksandar Rakić. Their much-anticipated UFC 259 matchup had all the makings of a light heavyweight banger, but for some reason, Santos found himself holding back and he would suffer a unanimous decision loss to Rakić, marking the first time that he’s lost three straight fights in his career.

With 21 bouts in his UFC career, Santos knew he couldn’t let these setbacks define him, and that’s why he’s coming into this weekend’s matchup against Johnny Walker on a mission to prove something to himself.

“I’m so excited because I need to come back with a win and I need to improve, not for anyone but just for me. I need to show that I deserve to be in the Top 5,” Santos told UFC.com. “It can be a knockout or a submission, it doesn’t matter, I just want to finish this fight as early as possible.”

Finishing a fight is a feeling that Santos hasn’t experienced since knocking out current UFC light heavyweight champion Jan Blachowicz in February of 2019, and to say that he misses that feeling would be an understatement.

“It feels so good. It’s hard to say how it feels other than I just feel so happy,” Santos said with a grin. “It makes me feel like I did my job, like I accomplished the mission. This is going to be an amazing feeling and I’ve waited a long time for this moment and it’s going to happen on Saturday.” 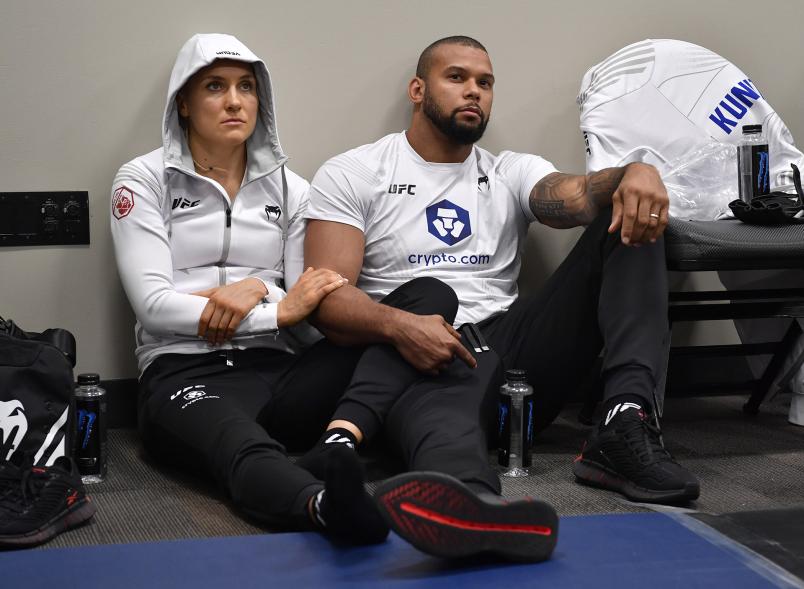 Yana Kunitskaya of Russia relaxes in her locker room with husband Thiago Santos prior to her fight during the UFC 264 event at T-Mobile Arena on July 10, 2021 in Las Vegas, Nevada. (Photo by Mike Roach/Zuffa LLC)

To get that long awaited victory, Santos is going to have to get through fellow Brazilian finisher Walker. At 4-2 in the UFC, Walker is the type of fighter who brings unpredictability and explosiveness to the Octagon. It’s a style that “Marreta” welcomes with open arms and closed fists.

“He’s a tough guy, but in this division, there are a lot of tough guys, and he won’t be different. He can surprise and do different punches and kicks and spinning attacks, but I’m ready for that,” Santos said of Walker. “I feel like I’m going to knock him out.”

A statement win over Walker would help Santos cement his footing inside the light heavyweight Top 5 and put him back in the mix for another shot at the title. While that’s in the back of his mind and he’s happy to see the division moving forward, the truth is that he’s only focused on getting past Walker.

“We don’t know what’s going to happen. We have a title fight with Glover and Jan and Jiri Prochazka waiting, but you never know. At this time, everything is weird, people can get sick, and everything can change,” Santos said. “I’m just focusing on my fight, and a good win can put me so close to the title again.”