Brazilian Feels More Like "Marreta” Of Old With Each Passing Fight Since Injury
By E. Spencer Kyte, on Twitter @SpencerKyte • Mar. 9, 2022

With each appearance, Thiago Santos feels like he’s getting closer to being his old self again.

“It was a hard time, it took time to recover, but I feel I’m getting better every fight,” said the Brazilian veteran, who faces surging contender Magomed Ankalaev in the main event of this weekend’s fight card at the UFC APEX. “And I’m sure for this fight, I will be better than the last fight.”

Four straight victories and three straight stoppage wins in the light heavyweight division elevated the Brazilian finisher into a championship fight opposite Jon Jones at UFC 239, where he pushed “Bones” to the limit before ultimately landing on the unhappy side of a split decision verdict. During the contest, Santos suffered major damage to his left knee, as well as a torn meniscus in his right knee, leading to an extended stay on the sidelines. 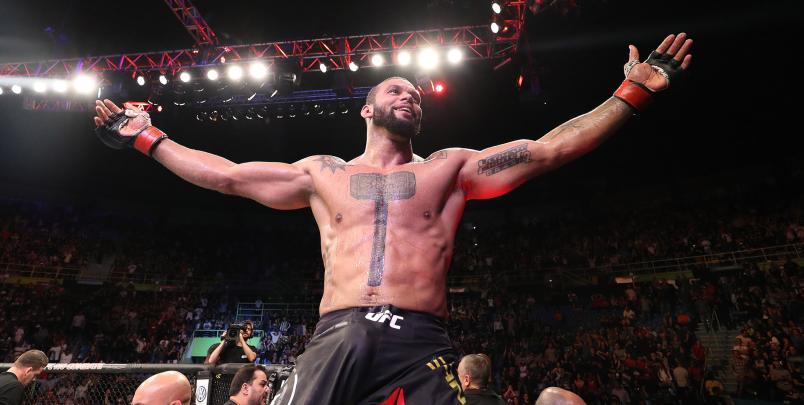 In his first fight back, Santos had some positive moments, but succumbed to the veteran savvy and “old man strength” of Glover Teixeira before dropping an uneventful decision to Aleksandar Rakic four months later.

Last time out, he got back into the win column, an important step in getting back to the being the “Marreta” of old, even if he wasn’t completely satisfied with the way things played out.

“To be honest, there weren’t any problems; it’s about the game plan,” he said of his clash with Johnny Walker in October. Many expected an explosive battle between the two powerful Brazilians, but instead, it turned into a tactical five-round affair, with Santos coming away with a unanimous decision victory.

“Every fight is different, and my last opponent, he’s a complicated fighter — he’s a little bit crazy and can surprise you in a moment. I was more careful, more technical; I was waiting for him to come to me, to attack more, but he too fought so careful.

“The fight wasn’t so exciting a fight, but it is what it is,” he added. “Sometimes fights go that way.”

While Santos is happy to have halted his three-fight slide and emerged from his fight with Walker victorious, please don’t read his acknowledgement that fights can occasionally be a little on the tepid side of things as the 37-year-old shifting to a new approach once the Octagon door closes.

The man is a knockout artist, and he desperately misses knocking people out.

Beating Ankalaev has proven to be a difficult task thus far, as the 29-year-old from Dagestan has suffered just a single setback through his first 17 professional appearances, that coming in the final second of his UFC debut opposite Paul Craig nearly four years ago. Since then, Ankalaev has won seven straight, following up his tandem stoppage wins over Ion Cutelaba in 2020 with unanimous decision victories over Nikita Krylov and Volkan Oezdemir in 2021.

During his run of success, the tall, rangy contender has shown a complete tool kit, including a diverse arsenal of kicks, sounds wrestling skills, and a sharp Fight IQ. The only thing that Ankalaev hasn’t shown as of yet is an ability to go 25 minutes if need be, which is something Santos believes will work in his favor this weekend.

“I’m sure I’m going to use my experience,” began Santos, who has prepped for five five-round fights and gone the distance in two of his last three main event assignments. “I know he’s a good fighter, a tough fighter, and he comes in with some wins, so he’s at a good time in his career, but I have my experience to use against him.

“I’ve fought against some of the best fighters in the world, fought a lot of main events, and I’m pretty sure I can use this against him,” continued Santos, who has shared the cage with the last three men to hold the UFC light heavyweight title, and enters the weekend one spot ahead of Ankalaev in the rankings.

Saturday’s return to action isn’t the only big event on Santos’ schedule, as he and his wife, UFC bantamweight standout Yana Kunitskaya, are soon to welcome their first child together, a daughter they plan on naming Alisa.

With his daughter on the way, there is nothing the proud papa-to-be wants more than to dedicate a triumphant return to form to “his princess” this weekend.

“It’s gonna be a very special moment for me and a good moment for my life,” he said of earning a victory on Saturday and then readying for the birth of his daughter. “I’m so happy and if I beat Ankalaev, I’m going to offer this win to my daughter, for sure, and it will be an amazing feeling.”