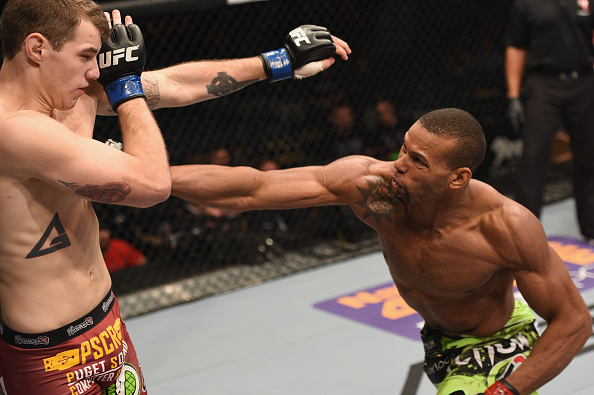 It’s the kind of question you know the answer to before it is even asked, but you ask anyway, wondering if the person on the receiving end of the query has a different view on things. And no, Thiago “Marreta” Santos doesn’t have a reason other than the obvious for his popularity among fight fans.

“The secret has been my fighting style, because I am always after the knockout,” he said.

That’s as good a reason as any, because for all the great submissions seen in mixed martial arts and the technical wizardry shown by the greats of the sport, nothing excites like a knockout, and no one goes in search of that finish with such enthusiasm as the 31-year-old Brazilian does. And despite the fact that he holds a purple belt in Jiu-Jitsu, ask him if he would prefer a knockout or a submission, and again, the answer is what you would expect from the steel-fisted “Marreta.”

“Knockout,” he says without hesitation. “This is definitely a feeling like no other.”

Winning - by whatever means available - may be an even better feeling if you’re a member of the UFC roster, and while Rio de Janeiro’s Santos has experienced it twice since coming off season two of The Ultimate Fighter Brazil 2, he’s also lost twice, making Saturday’s bout against Steve Bosse a pivotal one.

“I need the wins,” he said when asked what it will take for him to show the consistency that will move him into the 185-pound rankings. “But I am always ready and I need to fight more times this year.”

He got 2015 off to a solid start with a knockout of Andy Enz that took less than two minutes. His first UFC victory in 2014 over Ronny Markes lasted just 53 ticks of the clock, and his debut loss to Cezar Ferreira only made it to the 41-second mark. Take away his three-round decision defeat against Urijah Hall, and it’s clear that Santos a) doesn’t like to stick around too long, and b) he’s very much a feast or famine kind of fighter. That attitude will most definitely be called into service against Canada’s Bosse, another fighter who likes to swing haymakers until someone goes night-night.

“I don't see myself in any difficulty in this fight,” Santos said. “I am ready for everything he can offer me.”

So is this going to be one of those “stand in the middle and trade” fights?

Notice he didn’t say that he and Bosse are going to put on a great show, only that he will, so the mindset is one of getting out of there quick and spectacularly, and preferably with a Performance of the Night bonus.

Yet while that has served him well at times and may very well do so again this weekend, Santos does need to be ready for anything in a tough middleweight division, so work with American Top Team in Florida is likely to sew up any holes in his game.

“The wrestling, takedowns, attacking and defense,” he said when asked what ATT brings to the table for him. “And the sparring makes me more confident.”

Confident, able to end a fight with a single blow, and having the willingness to take the risks necessary to throw that blow - all attributes that make Thiago Santos a dangerous young man. Add in the new tweaks to his game courtesy of ATT, and….well, he’ll let you know what to expect on Saturday and beyond.

“The fans can expect a great show and a beautiful knockout,” he said. “For the rest of 2015, I’m doing a lot of work, I’m very dedicated, and I’m looking forward to getting to the top.”