After More Than A Year Away, "Marreta” Looks To Resume His Conquest
By Zac Pacleb, on Twitter: @ZacPacleb • Nov. 6, 2020

Thiago Santos spent the last year (490 days, to be exact) waiting, training, recovering and biding his time as the light heavyweight division moved along without him after his split decision loss to Jon Jones at UFC 235. While Santos became the first fighter to win a fight on a judge’s scorecard in the UFC against “Bones,” he joined the long list of failed challengers. Even worse, he needed to step out of the immediate title picture as the knee that blew out during the fight healed.

Now, Santos finally gets a chance to reassert himself as the No. 1 contender at 205 pounds as he headlines the November 7 UFC Fight Night event against fellow Brazilian Glover Teixeira. It has been a road of stops, starts, COVID-prompted delays and a whole lot of waiting, but it comes to an end on Saturday when Santos steps into the Octagon.

“I’m sure I’m going to feel so emotional, but I trained for this too,” Santos told UFC.com. “I cannot stay too emotional. I need to control myself about that, and I have thought about this - I’m really excited. I’m trying to, that time when I enter (the Octagon), trying to control myself.”

The light heavyweight division Santos returns to is vastly different. Jan Blachowicz, whom Santos knocked out in their main event in February 2019, holds the belt after Jones vacated the title in his next step in the will-he-won’t-he dance with the heavyweight division.

Concerning the latter, Santos doesn’t feel snake bitten about the fact that he doesn’t get another chance at Jones, for now. He also isn’t all that concerned about the chatter with Israel Adesanya, who has teased a move up to light heavyweight to dethrone Blachowicz and eventually challenge Jones.

“Marreta” did admit he is interested in fighting Adesanya if the opportunity presents itself, but his mind is focused on the streaking Teixeira, who remains one of the division’s mainstays at 41 years old.

The top four nature of the fight lends one to seeing this bout as a No. 1-contender fight, but title shots are a tricky business of timing, performance and desire. For Santos, he sees it more or less the same, but understands he does control his destiny to a degree.

“It’s not 100 percent,” he said. “I’m sure the next challenger should be who wins this fight between me and Glover. No one knows. I don’t know what UFC is going to do. My goal is win this fight and go to a title shot, but it doesn’t depend on me.”

With Teixeira in mind, Santos had nothing but good things to say about the former title challenger and is particularly impressed by what Teixeira has done north of 40 years old.

“He is doing good for his age,” Santos said. “So good. He has a lot of experience, and I’m sure he uses this in the Octagon. How he prepares to fight, he found the right way to prepare himself and to fight, too. I need to pay attention to everything. He is a tough guy. He is dangerous everywhere.”

While being well-rounded is evident in both fighters, it’s hard to ignore the signs pointing to a banger of a bout. Santos and Teixeira combine for 33 knockout wins, and neither is a stranger to taking some damage to land the bigger bomb, either. 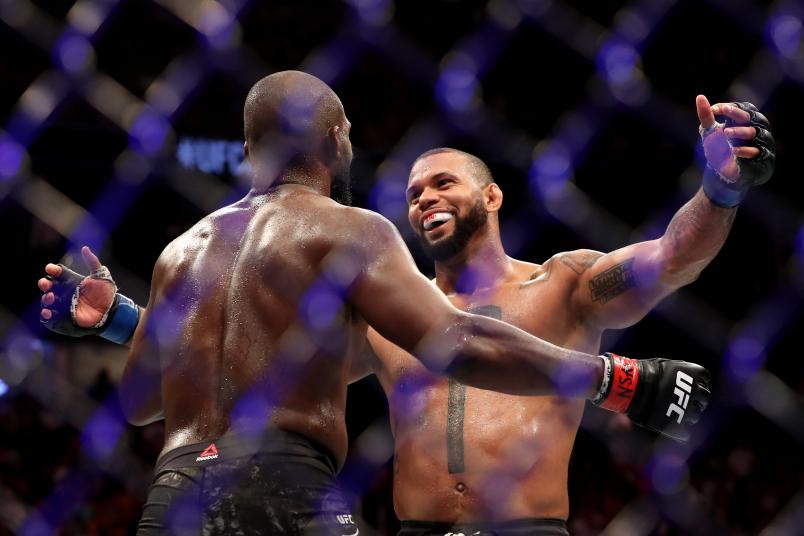 That type of fight can go a few different ways for a fighter coming off a major injury like Santos, who said that while he was able to start a training camp after about eight months, it took closer to a year to get over the physical and mental hills one climbs on the recovery road.

“I train everything,” Santos said. “Not only physically, but mentally too because before, I was afraid someone would kick my knee again. I worked on that. I did a lot of drills until my confidence was back.”

With the constant cycling and shuffling that goes on in every division in the UFC, it’s easy to forget about what a fighter can do if they’re out of action for a stretch of time, but a quick review of Santos’ highlights is a fast reminder of the kind of devastating and dynamic power he brings to the division.

It wasn’t long ago when Santos strung together four wins in five months to earn a shot at Jones. The division he returns to looks quite different, but the goal is all the same, and the method likely is too, which means when Santos enters the Octagon, it is must-watch TV. He comes back with a body recovered and a mentality even more resilient than before, primed to make his case for a chance at gold once again.

“I learned how to overcome,” Santos said. “I went through some hard times, but I’m back. Sometimes, I felt I was never gonna fight again, but I survived everything about this hard time. Now, I feel 100 percent. I am so happy to be back.”