Thiago Moises Out To Prove Where He Belongs

At UFC Fight Night: Tsarukyan vs Gamrot, Moises Is Out To Prove That He’s A New-And-Improved Version Of Himself As He Looks To Get Back In The Win Column Against Christos Giagos
By Kevin Schuster, @KevinESchuster on Twitter • Jun. 24, 2022

Entering UFC in the fall of 2018 after an impressive head kick knockout against Gleidson Cutis on Dana White’s Contender Series, Thiago Moises had one message for UFC President Dana White: give me your best fighters.

His wish was granted. Moises was scheduled to fight Beneil Dariush, the current No. 6 ranked contender in the UFC lightweight division, in his UFC debut only three months after earning his UFC contract. At that time, Dariush needed a win. On a two-fight skid, a fight against a debut opponent sounded like an easy enough challenge to get his career back on track. For Moises, a win against Dariush would fulfill his perfect vision for the start of his UFC career.

The debut didn’t go to plan for the newcomer. Unable to find success on the ground, Dariush took advantage of failed submission attempts to overwhelm Moises with ground-and-pound. Despite dropping his first fight under the UFC banner, Moises got exactly what he asked for. The “being thrown straight into the fire” method is the only way Moises saw his career elevating to the highest level.

“That’s why I’m here in the UFC,” Moises said reflecting on his UFC resume. “I want to be the best fighter in the world. To be the best you got to beat the best. That makes me a better fighter. Fight after fight I always show a better version of myself, and Saturday is going to be a much better and much improved Thiago in the Octagon.”

In 2020, he kickstarted a three-fight stretch that saw Moises submit Michael Johnson and earn two impressive victories against Bobby Green and Alexander Hernandez. His plan seemed to have worked.

However, a bout against rising star Islam Makhachev brought Moises’ hot streak to a halt. Submitted in the fourth round, Moises got to experience what fighting one of UFC’s elite grapplers is like. Unlike 2020, Moises didn’t bounce back from this loss with a three-fight win streak, as he would lose his return bout by first-round knockout against Joel Alvarez at UFC Fight Night: Holloway vs Rodríguez

“I’m using that as fuel,” Moises said about his loss against Alvarez. “To motivate me and get me back in the gym and training more, training harder and getting better. [I] keep learning, keep improving, and that’s what I’m going to show in this fight, a better version of myself than I was in the last two. That’s for sure.”

Acknowledging his mistakes against Alvarez, Moises recalled not sticking to his gameplan of grappling against his much taller opponent. Seven months later, those mistakes have since been corrected by the help of his teammates and coaches at American Top Team. 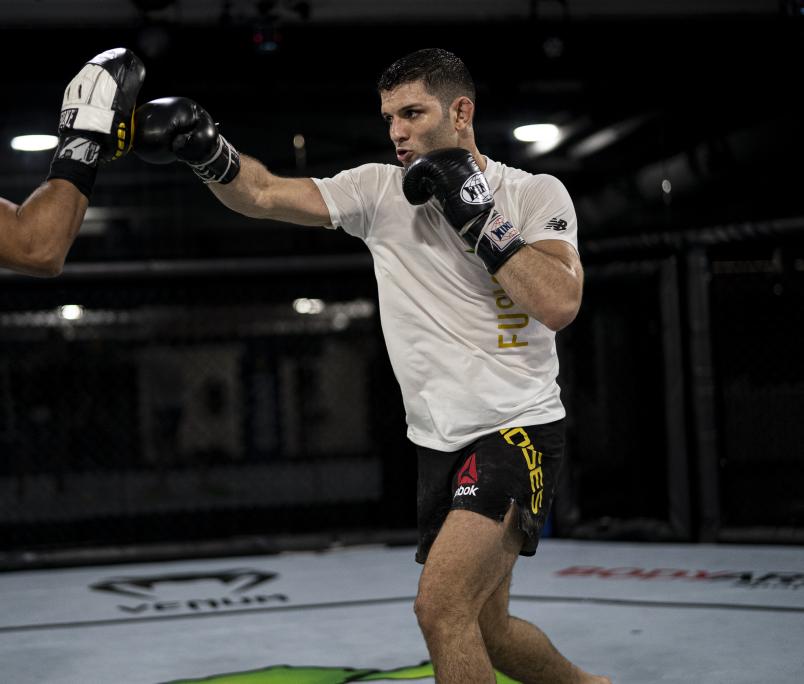 Thiago Moises trains at the UFC Performance Institute prior to his UFC Vegas 31 bout. (Zuffa LLC)

“Training at ATT, you get better every day,” Moises said. “There’s great training partners, great coaches, you learn every day, every session, getting better. When I got home [from my last fight], I started training, getting better. I saw what I did wrong, and I was fixing those mistakes that I did in my last fight so I’m ready to show an improved version of myself Saturday night.”

At UFC Fight Night: Tsarukyan vs Gamrot, Moises has a chance to send his career trajectory back on track when he steps in the Octagon against Christos Giagos. Like Moises, “The Spartan” has faced some of UFC’s biggest names, including Gilbert Burns, Charles Oliveira and Arman Tsarukyan, one-half of this weekend’s main event.

“He’s very well rounded, he’s a very tough guy,” Moises said. “He’s fought some of the best guys also in the division, he has a lot of experience, and I see him as well-rounded, but I see myself better than him everywhere. I see myself beating him everywhere. I’m just going to push the pace and bring the fight to him, make him tired and I’m going to get the finish.”

The Brazilian believes that every fighter, no matter their form or overall talent, makes mistakes when they step into the Octagon. By bringing the pace and fight to Giagos, Moises expects openings to end the night early will come soon and often.

“To be honest with you, I see him making mistakes everywhere,” Moises said. “I respect him a lot, he’s a very tough fighter, but I’m going to win this one Saturday.”

Despite fighting proven UFC veterans, Moises’ end goal was to join them as one of the world’s elite lightweights. To do so, Moises needs to get back in the win column. This weekend, he has 15 minutes to prove where he belongs at 155 pounds.

“I got to go there on Saturday night and get this win,” Moises said. “Give my best and perform. If I go there and give my best, people will see that I belong to the elite of the division.”