"There’s a long road ahead of us, and it’s very exciting to put this new body to the test." - Thiago Alves 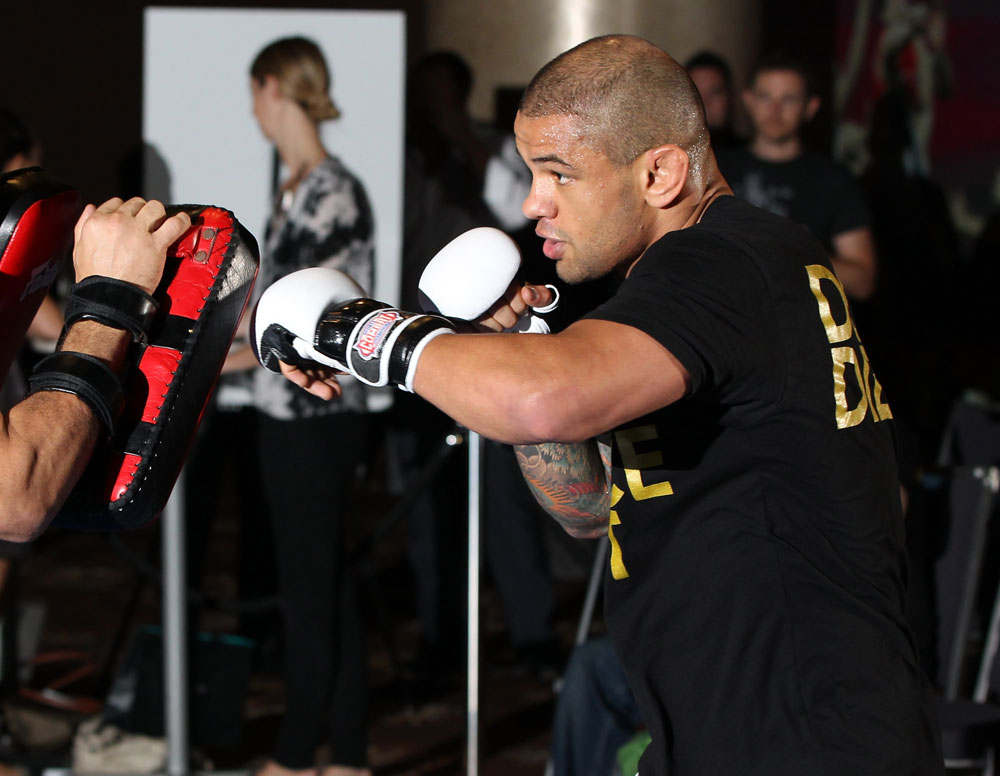 An eternal optimist, Thiago Alves may be the only person in the universe to say that going through four surgeries that kept him out of the Octagon for over two years was “lucky,” but considering that his wait to return ends on Saturday when he faces Seth Baczynski in Orlando, that positive thinking is right on time.

“I was lucky to have four surgeries back-to-back, so I don’t believe I have anything else to do on my body,” he laughs. “It is what it is and you really can’t think about what happened to you. You’ve got to think about what you’re going to do with those things. That was my mentality - I’m gonna heal up, I’m gonna get better, and I’m still pretty young. Despite being a veteran in this game, I just turned 30 last year, so I’ve still got a long road ahead of me.”

“At least I got everything out of the way. That’s the only way that I could cope with the situation.”

Jokingly altering his nickname to “The Bionic Pitbull,” Alves may not be exaggerating too much, as he underwent his four surgeries to repair his right and left pectoral muscles, his ACL and PCL on his left knee, and his left bicep. One surgery can be enough to make a veteran fighter ponder his future. But four? That’s going beyond the call of duty from a physical standpoint. Alves never considered hanging up the gloves though.

“It never crossed my mind that I would go out like this,” he said. “I got a little angry at the situation, but it was out of my hands.”

And though he returns to battle this week with a 2-4 slate in his last six bouts, two of those losses came against former champion Georges St-Pierre and former title challenger Jon Fitch, and in his most recent bout in March of 2012, he was on his way to an impressive decision win over Martin Kampmann before getting submitted by “The Hitman” with 48 seconds left in the fight. And as he pointed out earlier, he is only 30 years old.

“That’s a huge advantage,” he said. “I’ve been around for so long and I fought the best in this weight class, and now we’ve got this new blood coming in that’s not really new because they’ve been around. But it’s a new wave, and I truly believe that most of the toughest guys in my weight class are guys I train with on a daily basis. So it’s very encouraging to go out there and join them and make a run for myself.”

Alves isn’t just boosting up his teammates, as top welterweight contenders Tyron Woodley, Hector Lombard, and Robbie Lawler all share the American Top Team gym with the Brazilian, making for what must be some impressive sparring sessions.

“If you come to ATT and check out our sparring, it’s as good as watching a UFC fight,” laughs Alves, but if the adage that steel sharpens steel is accurate, the “Pitbull” should be able to cut through stone at this point.

“It’s pretty good and it keeps things in perspective,” he said of training with this high-profile trio. “I train with them on a daily basis, so I know that I’m more than capable to be there. It’s very exciting and I’m very blessed to be part of such a big team, and I’m one of the originals. I’m the first guy that made a name for himself in the UFC fighting out of American Top Team. It’s good to see the work that we put in, and now we’ve got all these new people coming in and training with us and doing very well, so that’s very exciting.”

There’s nothing like a real fight though, and Alves will get one in fellow veteran Baczynski, the type of opponent who will find out immediately whether the Brazilian is truly back or not.

“Seth’s a tough guy,” said Alves. “He’s been around and has fought through some pretty tough competition. He’s lanky, tall, and he’s going to come to fight. He also has the advantage of fighting back-to-back. I’ve been out for two years, but I don’t think that’s going to play much into the fight because I’ve been preparing myself very, very well for my comeback for over two years, so as soon as they say ‘let’s get it on,’ we’re gonna get it on. It’s definitely a challenge though. He’s standing in front of my goals and I have to take care of him.”

If it sounds like Alves is just a tad amped up for his return that would be accurate, as he makes it clear that he and his peers are “adrenalin junkies,” and for him, there’s nothing like putting on the gloves and testing himself against an equally hungry opponent.

“I miss being active, the competition, and the lifestyle of a martial artist and a professional athlete,” he said. “Getting ready, getting up and eating properly, training hard and trading punches. There’s a long road ahead of us, and it’s very exciting to put this new body to the test.”