There's Only One Paddy Holohan 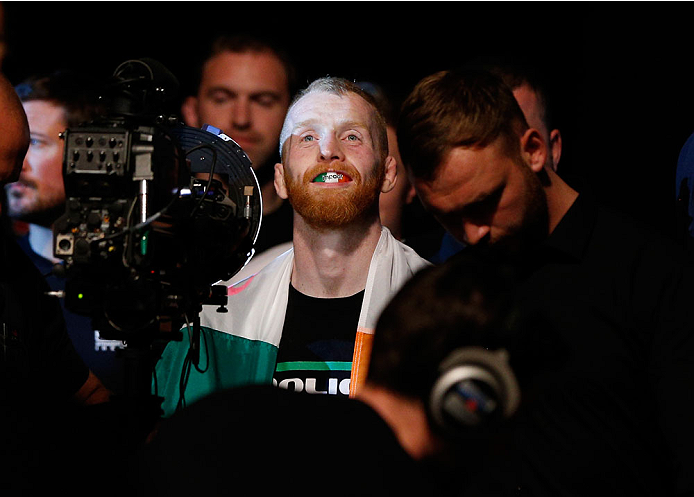 Occasionally you run into someone in this crazy game that appears to have it all figured out. There’s no fluff, no unreal expectations, just an appreciation for what’s here and now.

Paddy Holohan is that someone.

Maybe it’s the reality that he has a mouth to feed at home other than his own, that being a father is the priority, not championship belts and media obligations. Or perhaps Holohan would “get it” no matter what he did for a living. That doesn’t mean it’s all sunshine and flowers every day, but when things are going south, he has an ability to find a way to carry on in a northern direction, something he says he owes to his Irish roots.

“There’s a spirit about us, and when you go anywhere in the world, you’ll find an Irish pub, you’ll find an Irish guy sitting at the pub, and there’s a spirit and a vibe around us that we created over years and years and years of oppression,” he explains. “We’ve always been a spiritual, laughing people, even when things are going wrong and things are going bad. And people enjoy that because there’s a lot of negativity in the world these days, and it’s just a hard world where people are like ‘I want to be on time’ rather than ‘I don’t want to be late.’ (Laughs) It’s the positive and negative hard wiring of things. We’re negatively positively hard 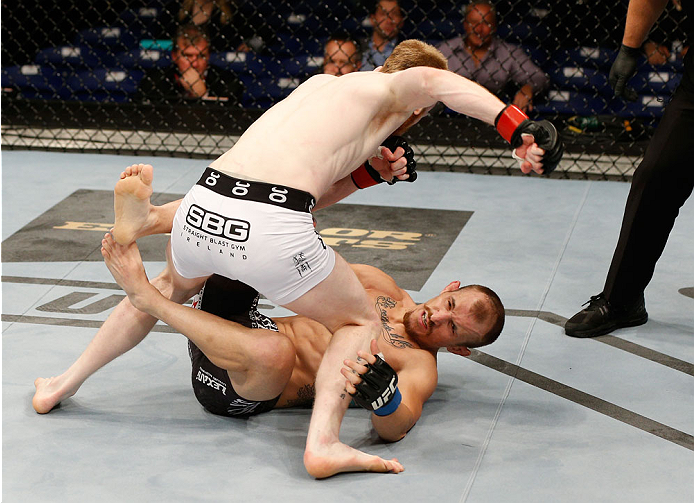 Only Holohan can laugh after a statement like that, but that just proves his point, doesn’t it? It’s why the world has been fascinated not just by the man leading the charge for the UFC’s Irish Invasion, Conor McGregor, but by “The Notorious” one’s teammates, from Holohan and Cathal Pendred to former Ultimate Fighter standout Aisling Daly. There’s a likability to all of them, as well as a real-life gravity that comes with their stories of battling it out on the local mixed martial arts scene and making something out of nothing in a country that learned to embrace athletes once looked at by those outside of Dublin as glorified streetfighters.

“When we started chasing this, this didn’t exist,” Holohan said. “It wasn’t like in America, where you could become a state champion and get respected for that. Over here, it’s either Gaelic football or hurling and all these ball sports and team sports. But combat sports is what we’ve always been good at, and this is a complete combat sport that we’re very good at.”

On Sunday, three of the SBG Ireland squad will be in Boston - Holohan and Pendred in prelim bouts and McGregor headlining. It’s almost like a home game for the three Irish lads, as thousands will make the trip from the Emerald Isle to Beantown, with thousands more from the local area proud to embrace their Irish heritage. For one night, this New England city will feel like Dublin’s O2 Arena, the place when the trio took over and delivered one of the more memorable nights in UFC history last July. That’s how it is when this band of brothers gets together.

“There’s a passion involved in sports that’s real here,” Holohan explains. “On the other side of the world, I think people are looking for people to fail. There’s a lot of couch critics, and that’s not really respected over here if somebody’s telling someone else how to do their job. The passion is real over here, and passion is a serious fuel to have in a fight. Not emotions, not sad, connected emotions, but passion. That’s a serious thing to have in a fight with you.”

The one usually setting that emotional tone is the flyweight Holohan, and he couldn’t have done a better job of it than he did in his UFC debut against Josh Sampo at the O2, when he kicked off the night with a first-round finish that took just over three minutes. He won’t be the first fighter out of the locker room at TD Garden, but he will be the first Dublin rep to step foot into the Octagon when he faces Shane Howell, and having his teammates with him every step of the way, from training camp to fight night, has made his third UFC fight a memorable one.

“It’s brilliant,” he said. “Even from the local shows, we’ve been doing that. Me, Conor, and Cathal have been on an awful lot of cards together, and it’s always kind of been me out first. I’m like the berserker, the crazy man that comes out and gets everyone ready. We’ve been doing it for a good while now, and the vibe and the energy that gets in between that little circle, I can’t put a name on what it’s like, but it definitely creates something special when we’re all getting ready together.”

Holohan didn’t have that on October 4, when he fought in Halifax against Chris Kelades while Pendred and SBG teammate Gunnar Nelson competed on the

same night in Stockholm. “The Hooligan” lost that fight to the late-replacement Kelades, his first defeat as a pro, but if you think the 26-year-old sat brooding in a darkened room after the loss, you don’t know Paddy Holohan.

“I open the curtains, I don’t sit in that back room,” he laughs. “We’re fighting here and I’m really grateful to get to do something that I really love to do, and the biggest payment overall is that this inspires so many people in Ireland. I get so many messages, and if I have to go in the gym and kill myself and go into the cage and fight my heart out and sometimes not get the result, I can live with that. I know that as long as I give it everything that I have, I can’t fail. That’s the way I approach this.”

“The thing with Chris, a few things went wrong, but you’ll never hear me saying ‘oh, I lost because of this or that,’” he said. “That guy didn’t want to lose either. There are two people in there and that’s the way it is. He got the win that day. There’s always the next day and I’m still alive and life is still kicking on. Whoever loves me loves me and whoever doesn’t doesn’t matter.”

So what matters to Holohan? The same things that matter to most of us: security, being happy, enjoying what you’re doing in life. A win on Sunday? That would be nice too, and though you can preface a question about his future with the notion that you know he’s not looking past this weekend, he admits that he does take more than a peek into what may happen down the road. 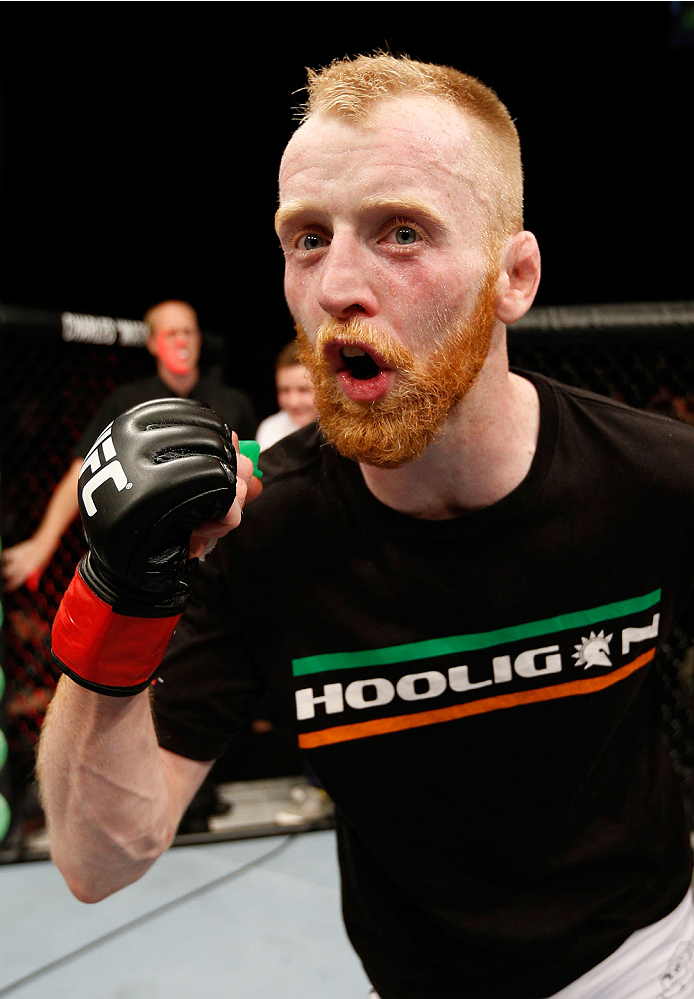 down, with people that are struggling to make it thinking in the time of weeks. So I’m thinking in years. I plan on staying in this and putting some crazy good fights on and inherit some crazy experiences. The whole package – Dublin, Boston, Croke Park - that’s an Irishman’s dream. If we can put that together, I can lie on my deathbed happy as Larry. I’d be a happy man.”

Croke Park is an 80,000-seat soccer stadium in Dublin. UFC President Dana White has said that if McGregor beats Dennis Siver this weekend, he could possibly fight Jose Aldo for the UFC featherweight title there. That would be an Irishman’s dream. But what about the usual suspects on a fighter’s wish list, like titles, riches, fame?

But what about that billionaire thinking he referred to? What is life like for Paddy Holohan ten years from now?

“It would probably be the same,” he said. “I like money. (Laughs) But I’d like to own a few properties and I’d like to just be my same humble Paddy, be myself.”

Nothing wrong with that.