There will never be another Roy Jones Jr.

Roy Jones Jr. is not one for nostalgia, opting to look to the future as opposed to the past. So as he prepared for his final fight on Thursday, the future boxing hall of famer hasn’t been getting misty about his last training camp.

“No, I really haven’t,” he said. “I find myself saying I feel pretty good and it’s crazy and now I understand why I do it, because I’m crazy.”

Jones laughs, and he continues to joke when I ask him why he’s decided that at 49, this bout with Scott Sigmon will be his last.

“Well, y’all don’t appreciate me, so I don’t see me sticking around. So I’ll get on out of here.”

But after the laughter dies down, he admits that after nearly three decades as a pro, his body is starting to tell him that it’s time to move on.

“You get to a point where your body starts to fail you and you’re having a hard time,” he said. “Then it’s time to start saying, ‘Okay, now may be time to give it up.’ When your body is not really holding up to the whole training camp, you look at things a little different, because if your body holds up, then you’re good. When your body starts breaking down, it means you ain’t good.”

And being anything less than great doesn’t sit right with the pride of Pensacola, who entered the pro ring for the first time after the 1988 Olympics in the same Civic Center where he will finish his career 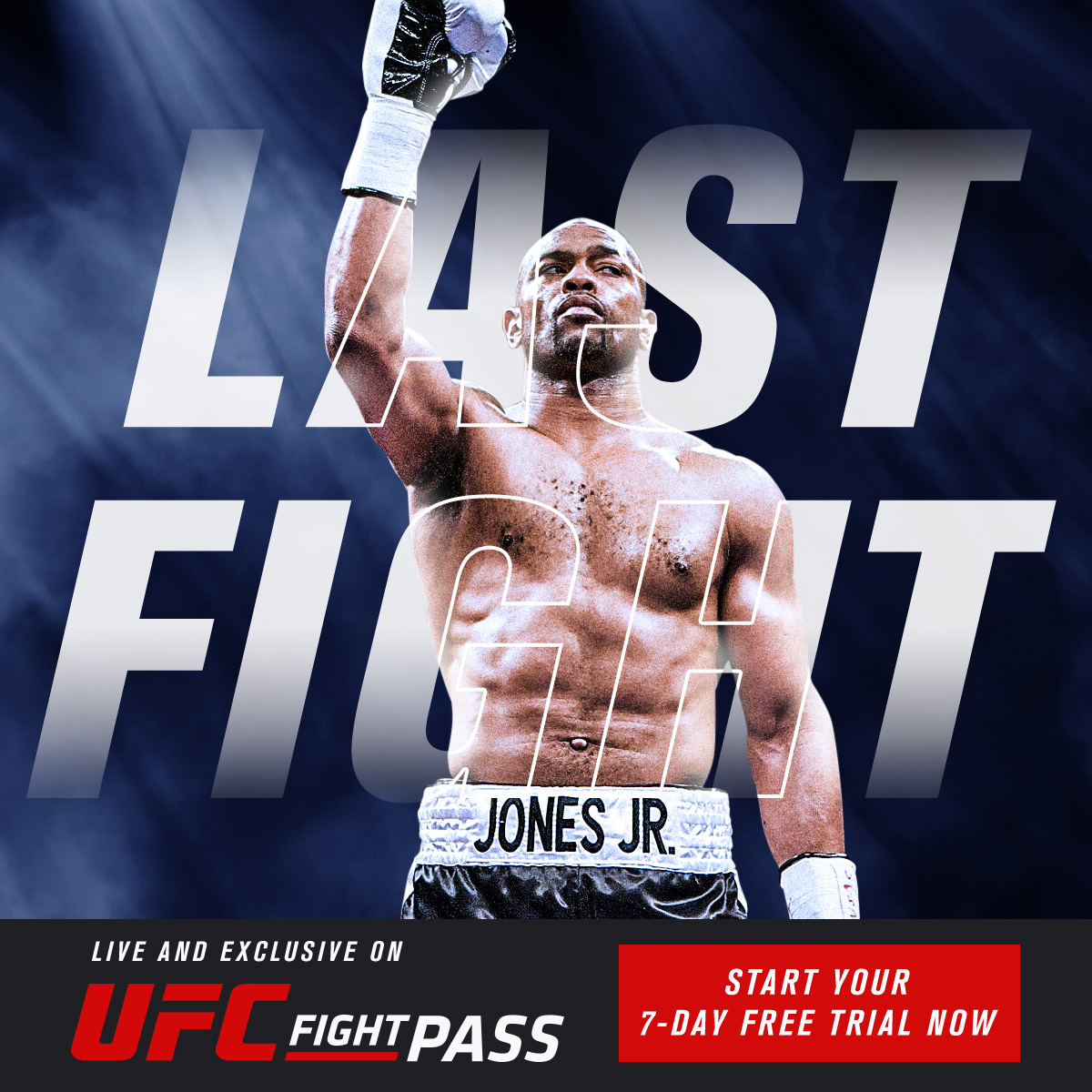 against Sigmon. As he prepared to face Ricky Randall on May 6, 1989, there was every indication that he was going to be a special fighter. All he had to do was go out and prove it. And he was ready for that task.

“I was anticipating a great career ahead, I was looking forward to what would happen,” he said of the night of his pro debut. “Everybody was like, ‘This is the beginning of something new and Roy Jones Jr. has the possibility to be something great and it will be big for our city because this will put our city on the map.’ And it did.”

Jones wasn’t a flash in the pan, either, as his dominance earned him recognition from the Boxing Writers Association of America as Fighter of the Decade for the 1990s. In his first 50 fights, he only lost once – to Griffin – and that was via disqualification in March 1997. Five months later, he needed less than a round to avenge that defeat.
RELATED CONTENT: Join UFC FIGHT PASS to watch Roy Jones Jr.'s final fight | RJJ gives his prediction | RJJ joins UFC Unfiltered podcast

Yet like any great fighter, at a certain point, Father Time starts to make his move, and that is one opponent who remains unbeaten. But the great ones always have that one last great fight or push, and Jones has put together an 11-1 run over the last six years that includes a three-fight winning streak heading into Thursday’s bout. If he makes it four straight by beating Sigmon, it’s the perfect way for Jones to leave the game. And a rare one.

“I love doing it on my own terms,” he said. “That’s the best thing about it. Any time you can do it on your own terms, that benefits everybody. So I look forward to it.”

And as a promoter, trainer and HBO commentator, Jones won’t be leaving the sport entirely. But as he points out, if a fight with a man familiar to UFC fans – former world middleweight champion Anderson Silva – materializes, he could be coaxed back for one night only.

“He’s the only one who could because that’s not a boxing match, that’s an event. So of course he could.”

So we’re playing semantics, then?

We’ll give Roy that one because he’s earned that right and, if anything, it proves that after all these years, he’s still a fighter, and that will never change. As for any talk – joking or not – that he’s not appreciated, that’s where he’s wrong, because there will never be another Roy Jones Jr., and unlike the song he wrote, we’ll never forget that.