Volkan Oezdemir Is Focused On Ilir Latifi And Reminding The World Just How Dangerous He Is
By E. Spencer Kyte • May. 29, 2019

Three up. Three down.

While the familiar combination often refers to a quick inning in baseball, it also currently applies to the results Volkan Oezdemir has garnered inside the Octagon — three consecutive victories, followed by matching trio of setbacks.

One of the breakout stars of 2017, the Swiss light heavyweight collected three wins in just under seven months, transforming from a newcomer taking a short-notice fight against Ovince Saint Preux in February to a bona fide contender coming off back-to-back first-round stoppage wins over Misha Cirkunov and Jimi Manuwa before July gave way to August. In doing so, Oezdemir cemented himself as the top contender in the division and entered his sophomore season in the UFC ready to challenge Daniel Cormier for the light heavyweight title.

As great as those initial three appearances went, Oezdemir’s last three outings have been the mirror image, but only with the roles reversed.

He was dominated by Cormier at UFC 220, getting finished in the second round, before venturing to Moncton, New Brunswick to face Anthony Smith. After a solid start, Oezdemir’s pace slowed and “Lionheart” was able to capitalize, securing a third-round submission win.

And then earlier this year, Oezdemir squared off with rising star Dominick Reyes in a bout similar to his debut against Saint Preux; a pairing between an established figure in the division and an upstart with an undefined ceiling. True to the symmetrical nature of his UFC career, the fight went the distance and came down to the scorecards, with Oezdemir landing on the unhappy side of a split decision verdict.

“The fight didn’t go my way and I was really disappointed,” Oezdemir said in regards to his controversial decision loss to Reyes in London. “I think the judges saw a different fight than I saw.

“I felt good during the fight — I felt like a winner — and I did everything I had to. I broke his nose in the first round, I was the most dominant guy during the fight and even he didn’t believe in the victory at the end.”

Heading into the contest, Oezdemir envisioned the matchup as a chance to correct course after a wayward second year on the UFC roster — an opportunity to hand a surging prospect his first defeat while getting back into the win column and signaling to everyone that he was still one of the most dangerous men in the 205-pound weight class.

When the scores didn’t fall his way, the 29-year-old from Fribourg set his focus on getting back into the cage as quickly as possible. 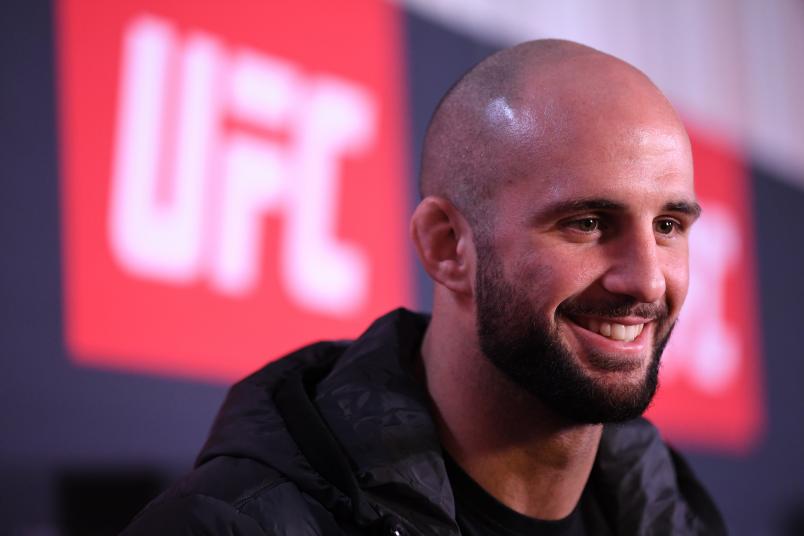 “I think you move on by focusing on the next one, which is why I wanted to fight right away on the next show,” he said. “The Stockholm card was up next and that was it, so now I’m ready to fight again.”

Saturday night, Oezdemir squares off with veteran Ilir Latifi in the second of three crucial light heavyweight pairings that close out the card at the Ericsson Globe.

A fixture in the division since the UFC’s second trip to Sweden back in April 2013, Latifi has hovered on the fringes of contention for the last few years, amassing a 7-3 record since his short-notice debut loss to Gegard Mousasi. But for all his successes and standing as a cult hero of sorts amongst the hardcore MMA community, the 35-year-old “Sledgehammer” has yet to win the bout that would vault him into the thick of the title chase.

This weekend’s pairing with Oezdemir represents another opportunity, but the Swiss standout has no intention of letting his former training partner take another step forward in his quest for gold at his expense.

“It’s time to build up some victories, that’s for sure,” said Oezdemir when asked if this weekend’s fight and the symmetry of his record feels like an opportunity to press the reset button and start fresh. “And I think Ilir is the perfect opponent for this and I can’t wait for Saturday.

“We didn’t talk personally about it, but through our management,” he added in regards to facing someone he’s friendly with and has trained alongside in the past. “It’s not going to be a problem because it’s all about respect. We’re going to be two work colleagues going into work and earning money together, that’s it.”

But that isn’t it.

While the basic premise is valid, Saturday’s meeting with Latifi is much greater than two businessmen punching the clock and each other in pursuit of another payday.

Oezdemir enters on a three-fight skid and no matter how anyone feels about the last decision or the level of competition he’s faced in those contests, a fourth straight loss would leave him backed into a corner, if he’s not feeling that way already.

Fair or not, Latifi has been typecast as someone who isn’t quite a contender yet, as he’s lost to the three highest-ranked fighters he’s faced during his UFC career. And how this one shakes out, combined with his recent results, will go a long way to shaping the way Oezdemir is viewed going forward.

So while it’s certainly not anything personal and there is no animosity between the two, Saturday’s co-main event is definitely more than just two colleagues looking to earn a little money, which is why Oezdemir is forecasting a rough night at the office for Latifi.

“It’s not going to be a fun night for Ilir,” he said. “I’m going to go in there and implement my game. I’m really confident about this fight. This is going to be my fight.”

Three up. Three down.

That inning is over.

Time for the next one to start.