"I had eight professional fights before TUF and I finished five of those opponents. If looks could kill, they probably will." - Elias Theodorou 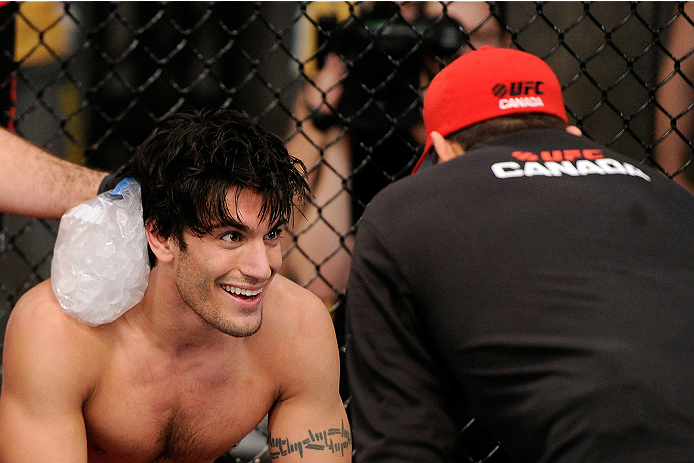 If your mother says The Ultimate Fighter Nations finalist Elias Theodorou looks familiar, or if your wife or girlfriend has suddenly become a fight fan, but only when he’s fighting, don’t be too surprised. Let’s face it, as a model and actor that has made more than a few appearances on the covers of Harlequin romance novels, the Toronto native doesn’t fit the fighting stereotype of flattened noses, black eyes, and missing teeth.

That doesn’t mean he can’t fight though, and if a perfect pro MMA record isn’t enough to prove that point, his two wins over Zein Saliba and Tyler Manawaroa that earned him a fight against Sheldon Westcott for the TUF Nations middleweight title this Wednesday should have done the trick. And it didn’t, he’s not too concerned.

“When you look at my exterior and the fact that I model and act, people might look at that as a weakness, like ‘oh, he doesn’t like to get hit in the head,’” said Theodorou. “But it doesn’t really matter what anybody else thought, because I knew what I was capable of, and I proved that. I think my record speaks for itself. I had eight professional fights before TUF and I finished five of those opponents. If looks could kill, they probably will.”

Yeah, he’s got lines like that, a 9-0 record, and if he wins on Wednesday, he will make history as Canada’s first Ultimate Fighter winner.

“Being first is king,” he said. “And that’s in anything. The UFC does it better than anyone else, but they will always be number one because they were first. The same thing will happen in regards to being The Ultimate Fighter. Being the first Canadian Ultimate Fighter is a lot more than bragging rights, and much more than an accumulation of all the hard work that me, my coaches and my team put together. It’s that certain something of being the Ultimate Fighter and being in the same ranks as Michael Bisping, Forrest Griffin, Rashad Evans, and the list goes on. Being amongst those guys is huge.”

Winning the show is a ticket to new level in any fighter’s career, yet most believe that the talented 25-year-old was eventually going to grace the Octagon, whether with the aid of TUF or without it.

“My management was in contact with the UFC, and they knew who I was, but they wanted a signature win,” said Theodorou of his pre-TUF days. “And the thing is, there were a bunch of former UFC veterans that I tried to take on, a couple of them on short notice, but they didn’t want to become a stepping stone. And I don’t mean to disparage them in any way or form, but I’m at that hungry point where I’ll fight anyone because I want to be in the UFC. When you’re a professional athlete, you want to be in the NHL or NFL. You don’t want to be almost there, you don’t want to look back and say that you almost made it. You want to make it because you feel that you belong and that you worked for a goal to be the best in the world. And that’s what I was doing. Unfortunately, all the former UFC veterans that I did try to fight didn’t pan out. Either they would say a flat out ‘no,’ or they would ask for a ridiculous amount of money, which is another way for them to say ‘no.’ So The Ultimate Fighter was a great venue for me because I know I’m mentally strong enough and very capable of sticking to a game plan that me and my coaches from back home planned out on what to do, and I stuck to it and here I am today – in the finale.”

It sounds a lot simpler than it was, because any time you put 16 fighters with similar ambitions in a house with nothing to do but train and fight, it can be a grueling dogfight to the finish or six weeks full of craziness that can test the heart and patience of the strongest individuals. And though the consensus after taping is over is usually that it was an experience you probably wouldn’t want to go through again, Theodorou apparently loved it.

“It was an amazing experience,” he said. “I was trapped in a house with 15 like-minded knuckleheads and we were all just working for the same goal. We trained, we had fun, and we grew together as martial artists.

“I would do it again in a heartbeat, no questions asked,” Theodorou continues. “Especially if it was with the same people. Everyone there was honestly an inspiring person in their own right, and they all brought something to the table. It was very cool to meet a lot of the people, and even though we’re not best friends hanging out every single day, we shared something really special, and I look forward to keeping in touch with these other guys for years to come.”

A lot of that had to do with a mutual respect shared by Team Canada and Team Australia. Sure, there were jokes and pranks, but nothing in a mean-spirited vein, making it a positive six weeks for the combatants.

“I think there was a lot more professionalism than in other seasons,” he said. “Not taking anything away from other Ultimate Fighter alumni, but I just think everyone was very focused on doing what they had to do, and it meant training and having a good time. We all had our laughs and acted like goofs as well, but we were all there to do something, and that was get through The Ultimate Fighter.”

Theodorou didn’t just get through, he decisioned Saliba and Manawaroa, and put himself on the doorstep of history. Were his two fights knockdown, drag ‘em out barnburners? No, but as he noted earlier, he had a game plan, he stuck to it, and it worked. And if he didn’t bring in fans for his smothering fighting style on the show, his personality certainly kept everyone entertained.

“I don’t shy away from the camera,” he laughs. “I’m kind of a media whore of some sort, so throw a camera in front of me and I’ll spit out about ten different things, and at least one of them’s gonna be gold. So we have options.”

That he does, not just on camera, but in life. So why fight?

“I do have an education that I could have gone to, and there are different aspects of modeling and acting that I could go into, but for me, martial arts is my passion and my love,” said Theodorou. “Everything else will be there afterward. This is what I’ve focused on, this is what I want, and there’s nothing else in my view. I think what makes me successful at it is that I can do anything I want, but all I want is this. This is my everything.”