Before his UFC on FOX bout against Pablo Garza, Dustin Poirier was 22 years old, 2-0 in the UFC, and racing to the top of the featherweight division. He was also getting noticed not just by the hardcore fight community, but by casual fans who saw him in the acclaimed documentary “Fightville.” Ten years later, “The Diamond” is right where he wants to be heading into his UFC 264 main event against Conor McGregor. But before these rivals settle the score, let’s take a look back at the year Dustin Poirier arrived.

Dustin Poirier missed the cut for a spot on The Ultimate Fighter. He also lost his WEC debut in 2010 to Danny Castillo. If he fell short in his second Zuffa bout against Zack Micklewright three months after the Castillo fight, he was likely on his way out of the organization.

Where would your head be at if you were Poirier, just 21, a local star on the Louisiana fight scene looking to break into the big time, but finding that the door to the next level was a little sturdier than you expected? Now you just had one more shot to get it right.

“I had worked so hard to get here, I sacrificed so much to get my shot in the WEC, I came in and Danny Castillo spoiled it,” recalled Poirier. “He beat me and it was the first loss in my pro career. I knew that if I went in there and lost against Micklewright, it’s gonna be a long road back to Louisiana, a long road back to the big lights.”

What followed on fight night at The Palms in Las Vegas on November 11, 2010, was a furious 53 second assault in which Poirier forgot that he was a professional mixed martial artist. In less than a minute, he reminded the world that for all the skill and technique involved in this sport, when necessary, you have to be able to call on an inner reserve and make it a fight.

That night, Poirier won the biggest fight of his career.

“I went back to my roots and what won me all my amateur fights and all the fights in the beginning of my pro career, and that was just tucking my chin and brawling and just going in there and fighting,” he said. “That’s in my heart, and you can’t teach that and I haven’t learned that. I was born with that aggression and that instinct to fight. So that’s all I did, and I knew I was gonna have to do it.”

Subsequent wins in the UFC over Josh Grispi and Jason Young have taken Poirier, now 22, off the bubble and into the featherweight contenders mix, and while he still brings out glimpses of the furious brawler that showed up against Micklewright, he’s also well aware that too much of that may be a bad thing for his career longevity.

“It can put me in bad places,” he said. “I’m lucky I didn’t wake up looking up at the lights when I did that to Micklewright, because just as quickly as it happened to him, it could have happened to me. So as I grow as a fighter, I’m getting away from that, and I’m learning to balance it with my technique and my aggression, and when I do find that perfect balance, a lot of guys are gonna be in trouble.”

The next one in the crosshairs for Poirier is fellow 145-pound prospect Pablo Garza, who has been just as impressive in his short UFC stint, nabbing post-fight bonuses for his knockout of Fredson Paixao and submission of Yves Jabouin. So when the two meet up this Saturday in Anaheim, a three round waltz isn’t on the menu, and considering that both are talented rising stars, it’s not out of the realm of possibility to think that this may not be the last time they’ll fight each other. Then again, Poirier doesn’t believe that to be the case. 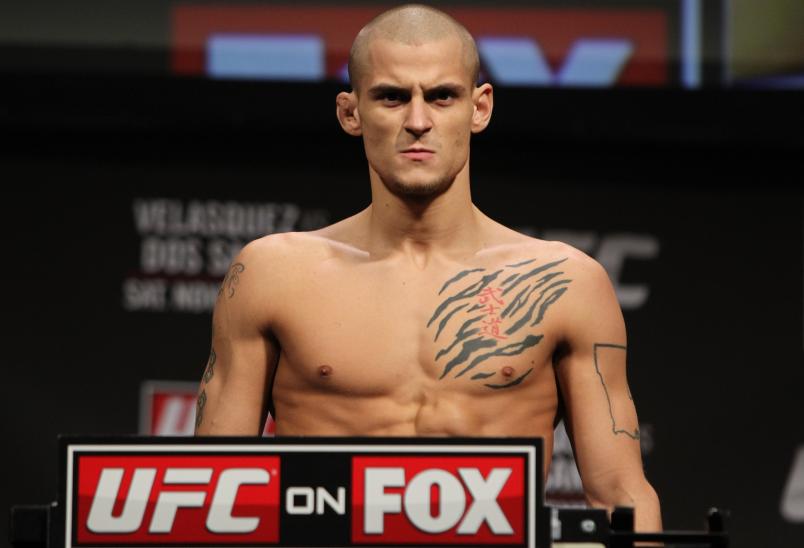 Dustin Poirier weighs in at the UFC on Fox official weigh-in at the Santa Monica Civic Auditorium on November 11, 2011 in Santa Monica, California. (Photo by Josh Hedges/Zuffa LLC)

“He’s not gonna want to fight me again after this,” states “The Diamond,” who nonetheless does admit that the lanky Garza does pose some interesting stylistic issues.

“He seems like a puzzle,” said Poirier of Garza. “I’ve only seen him fight briefly because the fights that he had were real quick, but he’s real awkward, he’s unpredictable, he’s long, and he has a weird rhythm. He’s just an awkward fighter and he fights with a weird timing, so we’ll see.”

Having UFC middleweight Tim Credeur manning his corner and working with him in the gym does make prep for the 6-foot-1 Garza a little easier though.

“My head trainer is Tim Credeur down here in Louisiana, and Tim’s 6-3, probably 200 pounds, a black belt in jiu-jitsu and has good striking, so preparing for a guy like Pablo Garza, who’s long, good off his back, and who has unorthodox striking, I have the perfect guy to train with,” said Poirier. “He (Credeur) is stronger and better than Pablo Garza, so I’ve got that, and I also have a group of guys down here who are good wrestlers and good kickboxers, so I got everything I need for this fight.”

The only thing the Lafayette native doesn’t have is time, as he’s been on a whirlwind run since signing for the Grispi fight, which took place on New Year’s Day.

“It started off full-steam,” he said. “I got the quick call at the end of November to fight Josh Grispi, so it started coming together before January was even here. It started off with that and it just hasn’t slowed down. It’s been crazy.”

What’s made his 2011 even more hectic is that between and after the bouts with Grispi and Young, Poirier has been in the public eye as the focal point of the critically-acclaimed documentary “Fightville.” The positive response to the film caught Poirier off guard, but he’s not complaining.

“That was another one of those things that kinda snowballed when it happened,” he said. The guy (Michael Tucker) would show up with the camera, we would record, and being in an MMA gym, you see that stuff a lot – guys with cameras trying to record stuff and saying they’re gonna do this or that. But as he kept showing up, day after day, I was like ‘wow, this might be kinda serious.’ And then he started talking and he was like ‘man, this isn’t some backyard-shot film. This is gonna be a big deal.’ Then it went to the film festivals and it just took off. And it was cool because I didn’t have to do anything other than be myself and it was an awesome time in my life. It started at the end of some of my amateur fights, so just to have those moments caught on tape and to be able to share it with the world is great.”

“People who know nothing about MMA go into the theater and watch it and come out as fans of the sport, simply because they see that the guys fighting are normal guys,” Poirier continues. “Sometimes MMA gets this bad image, so when they see normal guys with families, jobs, and responsibilities outside the cage fighting, they feel like they’ve connected with them, and I think it helps the sport.”

In addition, “Fightville” shows the world just what fighting means to Poirier, and even today, despite being established as one of the top young fighters in the biggest MMA organization in the world, there is no hint of him being jaded by success or him being at the point where this is simply something he does to pick up a paycheck. Fighting is more to him than that – a lot more.

“Fighting has brought me an anchor,” said Poirier, whose UFC bio has him claiming a Doctorate from the School of Hard Knocks. “It’s something I fell in love with, something that grounds me. It’s all I want to do, it’s what I want to be the best at, and it’s my passion. I live, breathe and sleep fighting, and being the best fighter that I can be. I know a lot of guys probably say that stuff, but I’m genuine when I say it. I really enjoy getting in there and I enjoy the ups and the downs, everything. I enjoy the journey. I just love this so much and I feel like I’m gonna be the best in the world someday, I really do. I feel like every day I’m growing as a fighter and as a person, and fighting has helped me. It’s improved my life so much, not only as a job, but by teaching me responsibility and respect, and all the stuff that the old school martial arts teach. I’m still new myself, but I hope the new guys coming in don’t ever get away from that. When I first started, I was in a dojo on indoor / outdoor carpet, shadowboxing in a mirror and listening to my sensei, and he had a gi on with cutoff sleeves. I hope it never loses that real martial arts feeling.” 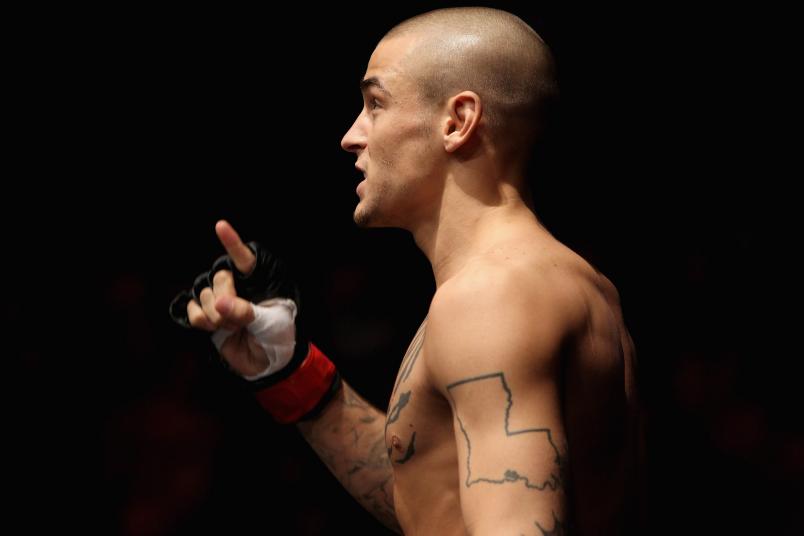 Dustin Poirier celebrates his win by D'Arce choke in the second round over Pablo Garza after their featherweight bout during the UFC on FOX event at the Honda Center on November 12, 2011 in Anaheim, California. (Photo by Josh Hedges/Zuffa LLC)

You would be excused if you forget that he’s just 22 years old, but it’s funny what coming up the hard way will do for your maturity once you reach a certain level of success. Poirier, despite his youth, has proven himself to be a consummate pro in and out of the Octagon, and he realizes that he has no other choice when it comes to the way he conducts himself if he wants to one day achieve all his goals in the sport.

“Nothing was given to me, so you just learn how to make things work more smoothly and how to better yourself,” he said. “I’ve been working since I was 15 years old, I moved out when I was 17, and it’s just been a crazy ride. But the maturity comes because this is my business, I want to be the best at it, and that’s a part of it. It’s an entertainment business, it’s a fighting business, and you have to be professional. This is my job, and I look at it as a job, and I know that being as professional as I can be will open more doors.”

Being able to punch them down if he has to doesn’t hurt either. But he’ll save that for the Octagon, a place he truly calls home.

He means it, too.