For years, BJ Penn seethed, hoping for the opportunity to avenge the first loss of his career to Jens Pulver. Five years after their UFC 35 bout, the two would meet again as coaches on The Ultimate Fighter 5.

The revival of this heated feud was reason enough to tune in, but even more compelling was the fact that the field consisted of perhaps the best young talent ever assembled for the show. Sure, there were some stragglers who were weeded out, but when you consider that Gray Maynard, Matt Wiman, Joe Lauzon, Manny Gamburyan, Cole Miller, and season winner Nate Diaz emerged, that’s an impressive lineup, even if viewers only remember the outside brawl that got Noah Thomas, Marlon Sims, and Allen Berube ousted from the house or Gabe Ruediger’s battles with cake and the scale.

The Big Payback
Penn gets Even with Pulver; Diaz Takes TUF5 Title

LAS VEGAS, June 23 – It took five years, but tonight at The Pearl at The Palms Hotel, BJ Penn erased the most discouraging loss of his career in punishing style, submitting Jens Pulver in the second round to break a two fight losing streak and begin the next phase of his career with a bruising exclamation point.

“I’ve been fighting these last five years, just to fight Jens Pulver,” said Penn, who was decisioned by Pulver in their UFC lightweight championship bout in January of 2002.  “That was the thing that made me hungry. The difference now is, I’m a grown man now.  I’m an experienced fighter and he caught me where I am the best in my career now.”

And ‘The Prodigy’ showed it, jarring Pulver with the first right hand he threw and then slamming him to the canvas.  On the ground, Pulver’s submission defense and heart kept him in the fight, but as Penn moved from submission to submission while adding in various punches and elbows, it appeared that it was just going to be a matter of time before the Hawaiian prevailed. 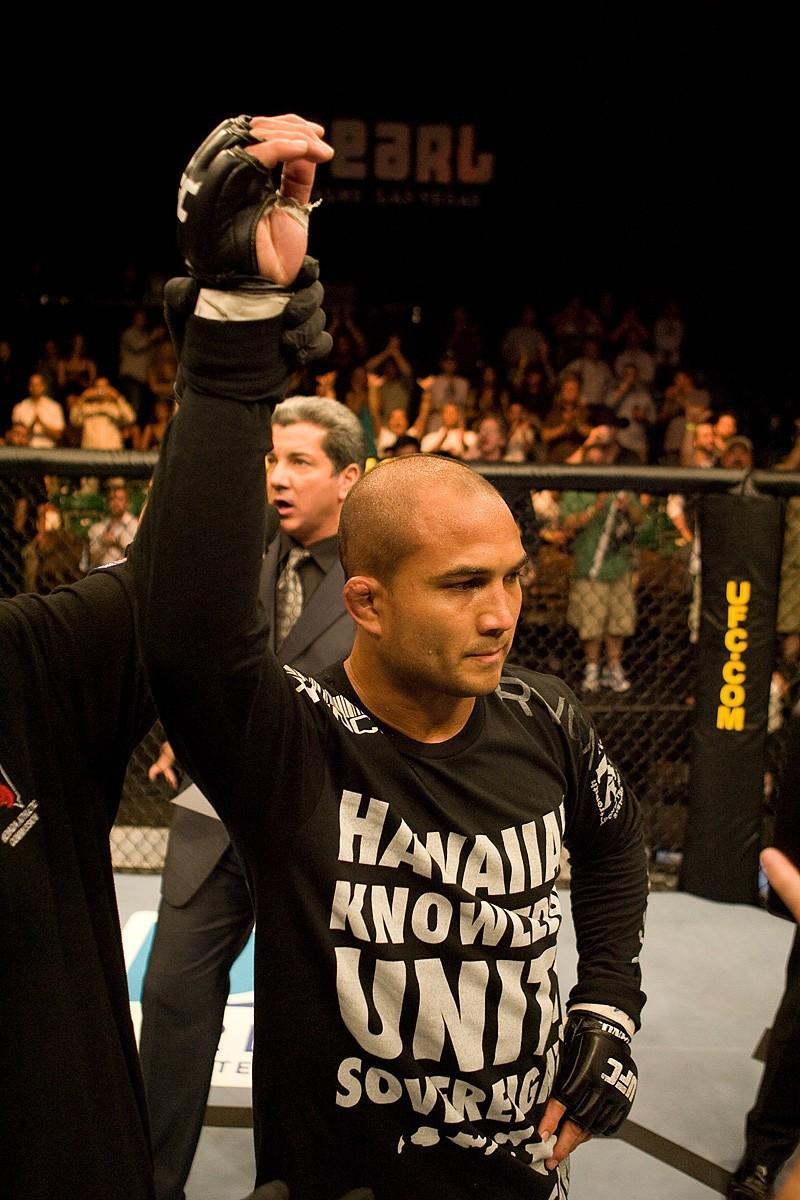 Pulver refused to give in, fighting his way back to his feet and engaging in some heavy exchanges with Penn until the bell for the first round sounded.

In the second though, Penn would not be denied, and despite Pulver’s courageous effort, he was too much for ‘Lil’ Evil’ on this night, eventually getting his opponent’s back and submitting him with a rear naked choke at 3:01 of the second round.

With the victory, Penn improves to 12-4-1 and also made a concerted effort to bury the hatchet with Pulver (21-8-1), which was a welcome development after five years of bad blood that reached its peak when the two competed as coaches on season five of The Ultimate Fighter.

The Ultimate Fighter final was a bit of an anti-climax, especially considering the torrid wars fans usually expect from the final bouts of the series.  But in season five’s championship match, a dislocated shoulder suffered by Manny Gamburyan kept an interesting bout from truly heating up, and gave Nate Diaz the win and the six figure UFC contract that goes to the winner of the Spike TV reality series.

What made the ending even more disappointing for Gamburyan was that he had won the first round with a relentless ground and pound attack and nullified the size and standup advantages enjoyed by Stockton, California’s Diaz. 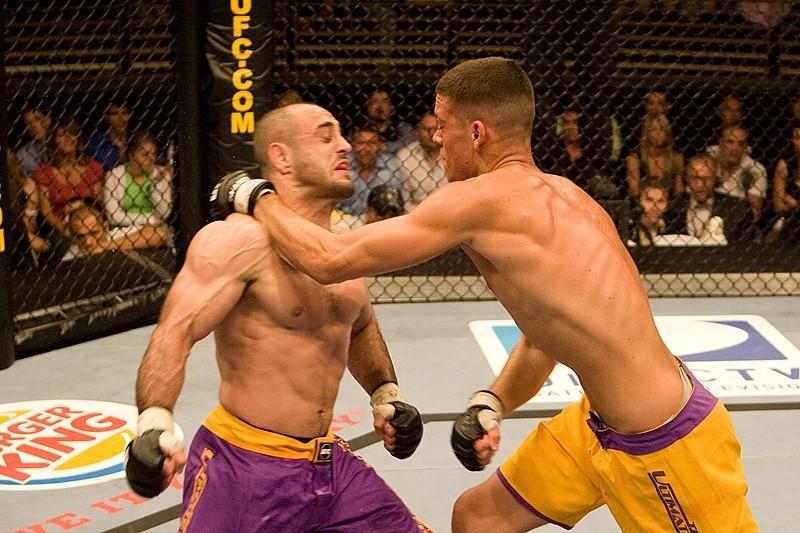 But moments into the second round, Gamburyan shot in for another takedown and landed hard, dislocating his right shoulder and causing him to tap out from the excruciating pain.

The end came 20 seconds into the round, with Diaz improving to 6-2 with the win.  Gamburyan drops to 5-3.

Rising lightweight star Roger Huerta got a scare in his bout against unbeaten UFC debutant Doug Evans, but ‘El Matador’ eventually prevailed, pounding out a second round TKO victory.

Evans, a State champion wrestler in Alaska, showed his grappling and wrestling expertise in the first round, overpowering Huerta and keeping him on the defensive for most of the opening stanza.

Huerta bounced back in the second, showing off some crisp standup work before another Evans takedown.  This time though, Huerta fought well on the mat and eventually got his foe’s back.  A barrage of unanswered blows then brought in referee Steve Mazzagatti to halt the bout and give Huerta his 20th win against just one loss and one draw.  Evans falls to 6-1.

Middleweight up and comer Thales Leites (11-1) put on a groundfighting clinic against Floyd Sword (14-3), eventually submitting the UFC newcomer in the first round.  Working from strength to strength on the mat, Leites dominated the New Mexico fighter and easily transitioned from position to position until landing the side choke that ended the bout at the 3:50 mark.

Before season five of The Ultimate Fighter began, many tabbed Massachusetts’ Joe Lauzon as a favorite to win it all.  But while that plan didn’t work out, Lauzon moved to 2-0 in his UFC career with a dominating two round win over castmate Brandon Melendez. 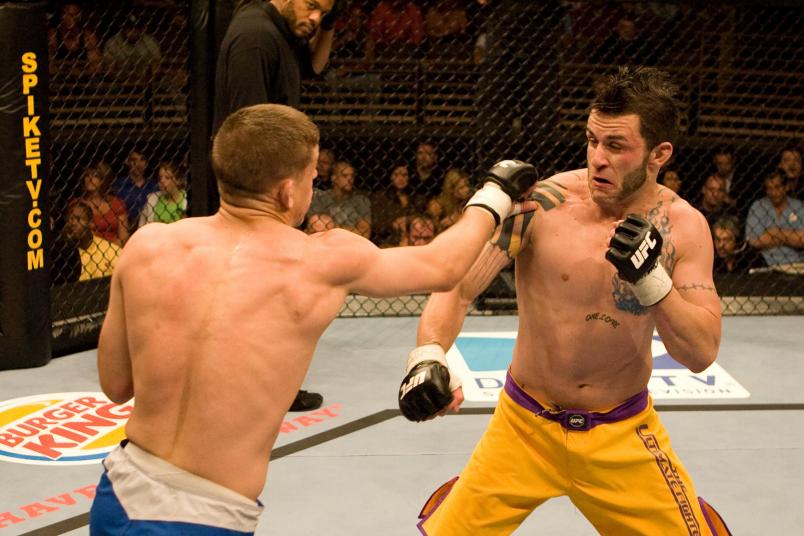 In control from the start due to impressive takedowns and ground work, Lauzon (14-3) took Melendez’ tendency to give up his back and made him pay with a number of rear naked choke attempts.  When Melendez (11-6) finally escaped from one of those attempts in the second round, he wound up spinning directly into Lauzon’s triangle choke, which produced a tapout at 2:09 of the round.

TUF5’s Cole Miller (12-2) was impressive in his UFC debut, stopping Andy Wang (8-7) at 1:10 of the first round.  A left kick to the head by Miller sent Wang down hard to the mat, and a follow up barrage caused referee Yves Lavigne to halt the bout.

Gray Maynard saw an apparent victory get snatched away in his bout against TUF5 teammate Rob Emerson, with the lightweight bout being ruled a no contest in the second round.

Maynard dominated the bout with his ground attack, and by the end of the first round, Emerson limped back to his corner with injured ribs.  Looking to end things, Maynard jumped right in Emerson’s face early in the second and picked him up for a thunderous slam. 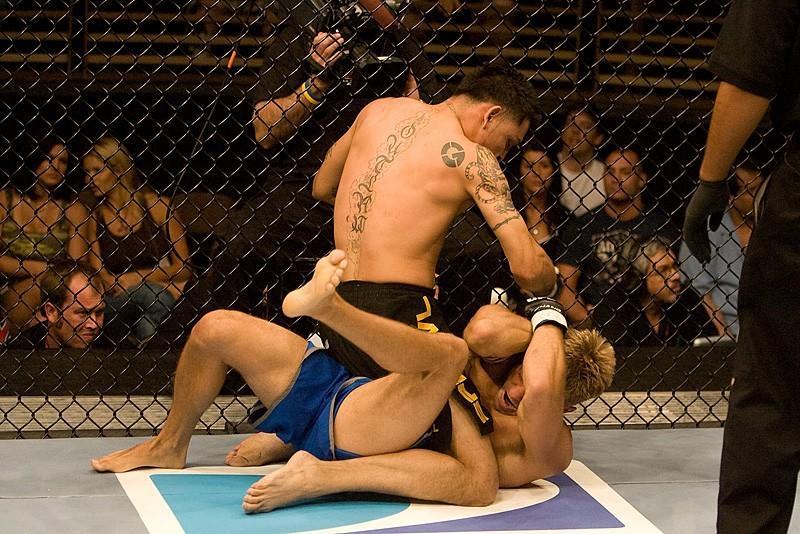 Then things got cloudy, as Maynard put Emerson down hard on the canvas, prompting Emerson to tap out due to an aggravation of his rib injury. But after referee Steve Mazzagatti waved the bout off, apparently due to the tap, the verdict came back as a no contest, with the reasoning being that Maynard was knocked out by his own slam, rendering both fighters unable to continue.

Lightweight prospect Leonard Garcia improved to 14-2 with a first-round submission win over TUF5’s Allen Berube (2-2).  ‘Monstah Lobstah’ was game in defeat as he worked his submission game on the Texan, but the more experienced fighter eventually broke free, and Garcia’s rear naked choke ended matters at 4:22 of the opening session.

Matt Wiman (7-3) evened his Octagon record at 1-1, blowing through his TUF 5 castmate Brian Geraghty (24-10-2) at 2:09 of the first round.  Referee Yves Lavigne stopped the bout after Wiman got in the mounted position and rained blows down on his foe.