We Break Down The Five Biggest Winners From Last Saturday's Las Vegas Event
By Thomas Gerbasi, on Twitter @TGerbasi • Oct. 4, 2021

The prelim portion of Saturday’s card stole the show in Las Vegas, and Jamie Mullarkey led the way with his second-round stoppage of Devonte Smith.

On the receiving end of some crisp shots in the first round, Mullarkey took the incoming fire, shrugged it off, and in the second frame, he went to work, pressuring the highly regarded prospect, chopping at his legs, and when he got him hurt, he finished the job. It was an impressive effort from the Aussie, who now has two consecutive UFC knockout wins to his name.

WHAT’S NEXT? I’ve got to stop putting Brad Riddell’s name in these spots because it seems like I want the poor guy to fight everybody. But…a rematch of their Fight of the Night battle in 2019 wouldn’t be a bad thing. Okay, so who else for Mullarkey? A fight with Vinc Pichel would be a war. 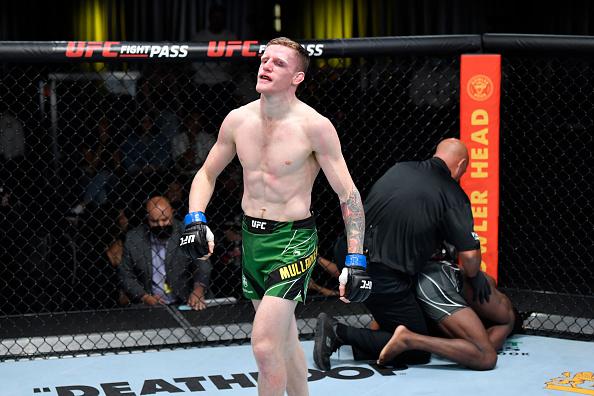 Jamie Mullarkey of Australia celebrates his TKO victory over Devonte Smith in their lightweight bout during the UFC Fight Night event at UFC APEX on October 02, 2021 in Las Vegas, Nevada. (Photo by Jeff Bottari/Zuffa LLC)

Scotland native Casey O’Neill did race out to a perfect 7-0 record heading into her bout with Antonina Shevchenko, with two of those wins coming in the UFC Octagon, but most expected that she was going to get pushed pretty hard in this one.

And truth be told, Shevchenko had a lot of positive moments early on. But O’Neill was relentless in her attack, and once she began to take over, she didn’t relinquish that command of the fight, ending matters in the second round to keep that record perfect.

WHAT’S NEXT? By the time you read this, O’Neill might have earned a place in the flyweight Top 15, and whether she did or didn’t, a Top 15 foe should be next for her – maybe any of the ladies from 13 to 15 – Maycee Barber, Miranda Maverick or Montana De La Rosa.

They can’t all go on the highlight reel. Yes, Saturday’s main event will not be up for Fight of the Year honors, but in beating Johnny Walker with a razor-thin five-round unanimous decision, Thiago Santos snapped a three-fight losing streak and has new life in the 205-pound weight class. And at 37, following a brutal stretch of injuries and losses, “Marreta” needed that. As the great trainer (and boxer) George Benton once said, “Win today, look good next time.” 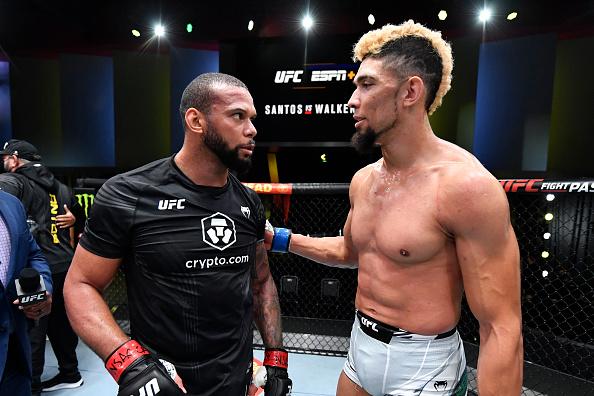 Thiago Santos of Brazil and Johnny Walker of Brazil interact after their light heavyweight bout during the UFC Fight Night event at UFC APEX on October 02, 2021 in Las Vegas, Nevada. (Photo by Jeff Bottari/Zuffa LLC)

WHAT’S NEXT? When you’re ranked fifth in the world, you don’t want to fight backward, and while we don’t need to see Santos fight Aleksandar Rakic again, I wouldn’t mind seeing Santos and Anthony Smith run it back, this time at 205 pounds.

Karol Rosa hasn’t lost a prizefight since 2018. Karol Rosa is a Top 15 contender who won her first three UFC bouts heading into her Saturday meeting with Bethe Correia. But in moving to 4-0 in the Octagon, Karol Rosa also showed that she’s going to be a problem for a lot of bantamweights in the coming years. Simply put, there was a lot of pressure on her bout with Correia, a hero of hers who was fighting for the final time. Rosa could have froze in that situation, could have shown Correia too much respect, but instead, she rose to the occasion and made it look easy in cruising to a shutout win. 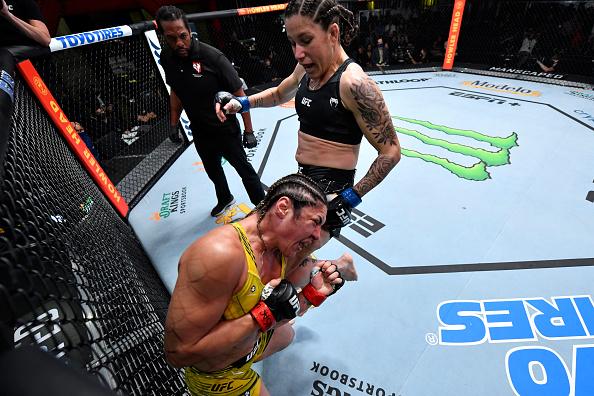 WHAT’S NEXT? I believe Rosa is ready for a crack at the Top 10 at bantamweight, and a Raquel Pennington fight sounds interesting to me.

After a fast start to his UFC career, Alexander Hernandez hit a patch where his biggest enemy was consistency. But if his first-round finish of Mike Breeden was any indication, Hernandez’ move to Colorado and his continued growth with head coach Marc Montoya and the rest of the Factory X squad is paying the kind of dividends that could lead him to the top of the lightweight division. He’s got the tools. All it takes is putting them all to use every time he steps into the Octagon.

WHAT’S NEXT? Hernandez made it clear that he wants to still fight Leonardo Santos, who withdrew from Saturday’s bout due to injury. I’m fine with that bout, and should he get it and win it, Hernandez should be ready to make his move on the Top 15 again.