Now That The Dust Has Settled After UFC Fight Night: Sandhagen Dillashaw, See Who The Biggest Winners Were And Our Biggest Takeaways
By Thomas Gerbasi, on Twitter @TGerbasi • Jul. 26, 2021

Saturday’s UFC Fight Night: Sandhagen vs Dillashaw event is in the books, and now that the dust has settled in the fight capital of the world, it’s time to go to the scorecard to see who the big winners were at the UFC APEX.

TJ Dillashaw’s main event win over Cory Sandhagen may not have been the fight he wanted after more than two years away from the sport, but it was definitely the fight he needed, as he had to dig deep, adjust his strategies, and show off his fight IQ while dealing with adversity and a talented and determined opponent. And though some may question the decision, it was a close fight that could have swung either way, and on this Monday, it’s the former champion who is on the inside track for a shot at the 135-pound title.

WHAT’S NEXT? After proving himself against a top contender in Sandhagen, I don’t have any problem with Dillashaw facing the winner of the rematch between Aljamain Sterling and Petr Yan for the belt, but there’s no date set for that one yet, and with Dillashaw wanting to stay busy, he’ll want to fight someone preferably in the Top 10 with some name recognition. I think the winner of the upcoming Jose Aldo-Pedro Munhoz fits that bill, especially with Dillashaw likely needing some time to heal the cut he suffered against Sandhagen.

If you’re a fight fan, I mean a REAL fight fan, how can you not love Darren Elkins? No, he’s not jumping off the Octagon, doing flips or pulling off flying armbars, but who’s tougher than “The Damage”, who delivered another come from behind win on Saturday, this one over Darrick Minner. It was a vintage, fall behind, get bloody and roar back effort from Elkins, who is without question the 145-pound division’s Truth Machine.

WHAT’S NEXT? Four of the top young talents in the featherweight division are Ilia Topuria, Movsar Evloev, Sodiq Yusuff and Bryce Mitchell. Are they ready for “The Damage”?

Adrian Yanez and Brendan Allen both picked up big wins in their Saturday bouts, defeating Randy Costa and Punahele Soriano, respectively. But while they both deserve to be here for their performances, I feel it’s necessary to include their opponents as well because in the lead-up to fight night, during it, and after the bouts had concluded, all four showed that even though this is a combat sport, it doesn’t have to be about bad blood, trash talk, etc., etc.

These four rising stars, who get kudos for taking fights that boxers at their level rarely do, showed once again that for as intense as the time in the Octagon can be, before and after they can be sociable with each other and even grab a little lunch the next day.

Nassourdine Imavov showed that he was a prospect to watch as he split his first two UFC bouts with Jordan Williams and Phil Hawes.

On Saturday, he proved just how good he was with a dominant second-round stoppage of Ian Heinisch. On point from start to finish, Imavov was so cool under the lights that he looked like he was out for a Saturday afternoon stroll and not in a prizefight, and if anything, he appears ready to start tackling the middleweight Top 15 sooner rather than later.

WHAT’S NEXT? Kevin Holland would be a nice matchup for the fans, as would a bout against surging veteran Brad Tavares.

This is another performance that will get more attention for the scoring of the fight than the effort turned in by the winner, but you have to give props to Raulian Paiva. 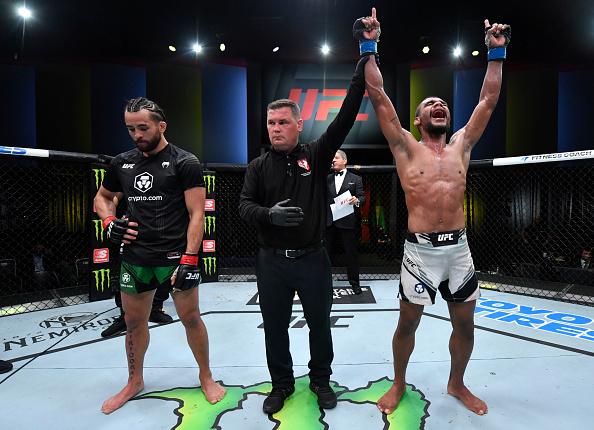 Raulian Paiva of Brazil reacts after his decision victory over Kyler Phillips in their bantamweight fight during the UFC Fight Night event at UFC APEX on July 24, 2021 in Las Vegas, Nevada. (Photo by Jeff Bottari/Zuffa LLC)

Paiva rebounded from a near-stoppage loss to Kyler Phillips in the first round to come back in the next two frames and take a hard-fought majority decision. That’s three in a row now for the Brazilian, who has a bright future at 135 pounds.

WHAT’S NEXT? I know that we usually don’t see rematches that don’t involve champs and contenders at the top level of the sport, but I wouldn’t mind seeing Paiva and Phillips run it back. That was a fight.