Now That UFC Fight Night: Barboza vs Chikadze Is Behind Us, It's Time For Us To Break Down The Biggest Winners From The Fight Capital Of The World
By Thomas Gerbasi, on Twitter @TGerbasi • Aug. 30, 2021

Saturday’s UFC Fight Night: Barboza vs Chikadze event is in the books, and now that the dust has settled in the fight capital of the world, it’s time to go to the scorecard to see who the big winners were at the UFC APEX.

Winning your first six UFC fights is nothing to overlook, so I was impressed with Giga Chikadze’s Octagon run heading into Saturday’s main event. But in fight seven, I wasn’t convinced that he was ready for an Edson Barboza yet.

Giga Chikadze Knows This Is His Moment

I was wrong. Dead wrong. Wronger than I’ve been in a long time. There, I said it. Chikadze’s performance was the type that probably shut a lot of people up, and now I look at the Georgian as a legitimate threat to anyone in the featherweight division. Can’t wait to see what he does next.

WHAT’S NEXT? Max Holloway or Yair Rodriguez would be fireworks for sure. Jeez, throw in Chan Sung Jung too, because any of those fights would have Fight of the Year potential.

Ricky Turcios has that “it” factor. We got a taste of it on season 29 of The Ultimate Fighter, and then, with the spotlight on and everything on the line, he put in a hellacious three-round effort against another future star in Brady Hiestand, who also left it all in the Octagon on Saturday night.

Ricky Turcios Is Fighting From The Heart

That was the kind of TUF final bout we expected every season after Forrest Griffin and Stephan Bonnar set the bar in 2005, and these two bantamweights gave it to us. But back to Turcios, who has the talent, personality and presence to make a lot of noise in one of the sport’s toughest divisions. 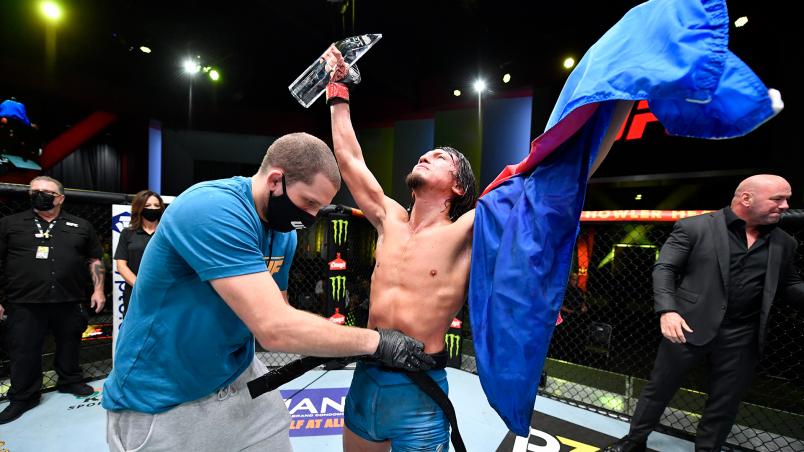 Ricky Turcios is presented with his black belt by Alex Morono following his split decision victory over Brady Hiestand in their bantamweight bout in The Ultimate Fighter Finale at UFC Fight Night: Barboza vs Chikadze on August 28 2021 in Las Vegas Nevada

WHAT’S NEXT? There are plenty of options at 135, and they’re all tough, so let’s see what the next step for “Pretty Ricky” is.

When I wrote about Daniel Rodriguez last week, I wondered if being in a big gym away from mentors like Joe Schilling, Cowboy Cerrone and Kathy Long would take his edge. He said it wouldn’t, and it didn’t. On Saturday, he picked up the biggest win of his career against Kevin Lee, making him a remarkable 6-1 in the UFC since his debut in February 2020. When it comes to the fight game, D-Rod is truly fearless, and that may be the most dangerous trait he has in a toolbox full of them. 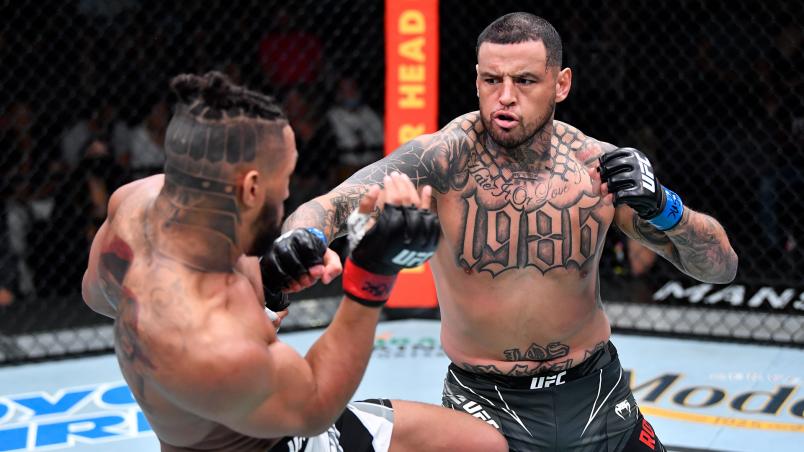 WHAT’S NEXT? Rodriguez deserves a Top 15 ranking at 170 pounds, and a Top 15 opponent the next time out. Geoff Neal, Muslim Salikhov or Belal Muhammad all sound good to me.

If you’ve followed the sport for any number of years, you’ll probably notice that practically all of us on the media side of this sport secretly (or not so secretly) root for Gerald Meerschaert. He’s just a genuinely witty and good guy, always accessible and with the kind of veteran’s tale that makes you appreciate what it took for him to get here.

Gerald Meerschaert Is All About The Journey

So to see him roar back from a rough start to beat Makhmud Muradov had to send you off into the night with a smile. That’s not a knock on Muradov, who’s a killer in the Octagon, but you know he’s going to be back, while every win for Meerschaert is important after 47 pro bouts, and with a newborn son, yeah, it’s good to see him get a big one like that.

WHAT’S NEXT? Meerschaert is one of the rare fighters who can make any matchup compelling, so bring on another one of the young guns, or give him that Top 15 test, like a Brad Tavares or Uriah Hall.

A lot of people talk about fighters having one-strike knockout power. Abdul Razak Alhassan actually has it, making every one of his fights a must see. Sure, he’s had his setbacks, and there wasn’t much to see in his 17 second KO of Alessio Di Chirico to say his move to Colorado was a success, but hey, any sub 20 second finish is a beautiful thing, and in the process, it snapped a long losing streak for the Ghana native and gives him a fresh start at 185 pounds.

WHAT’S NEXT? Bring on anyone for Alhassan, and I’ll be watching. That’s how exciting this guy is.