The Return Of The Sugar Show

"All the questions will be answered March 7th, whether I'm that top prospect or not, so it's exciting."
By Thomas Gerbasi, on Twitter: @TGerbasi • Mar. 4, 2020

It’s been two years since Sean O’Malley last stepped into the Octagon. In mixed martial arts, that’s a lifetime.

Yet in that time, “Sugar” Sean has not strayed from the public eye, has not vanished from the news cycle and has not lost the “top prospect” tag affixed to him after a blistering first-round stoppage of Alfred Khashakyan on the first season of Dana White’s Contender Series put him on the world’s radar.

Pretty amazing stuff. How does he explain it?

“That's a good question,” O’Malley laughs. “I think I've done pretty good on my social media, trying to stay relevant as far as posting and staying interactive. I have a podcast, a Twitch channel, a Patreon. I'm constantly interacting with the fans, so there's that part of it. I also think there's something else out there that just knows I'm about to be a superstar and I think people know that too.”

Clearly, two years away has not dulled the Arizonan’s confidence, and that’s not surprising.

After earning a contract on the Contender Series, his first two UFC bouts resulted in victories over Terrion Ware and Andre Soukhamthath, then followed a long battle outside the ring with USADA that resulted in two suspensions. O’Malley maintained his innocence throughout, but ultimately accepted the final suspension and opened the door for his return this weekend against Jose Quinonez, one he claims will show just where he’s at.

“All the questions will be answered March 7th, whether I'm that top prospect or not, so it's exciting,” he said. “In my eyes, my coaches' eyes and my team's eyes, we know how good I am. It's just exciting to go out there and get to show the people who do believe in me and the people who don't that I'm for real.”

It doesn’t hurt that when O’Malley does make the walk to face Quinonez in Las Vegas that he’s still only 25, and that with the exception of time off for two surgeries, he’s been in the MMA Lab gym working on his craft. 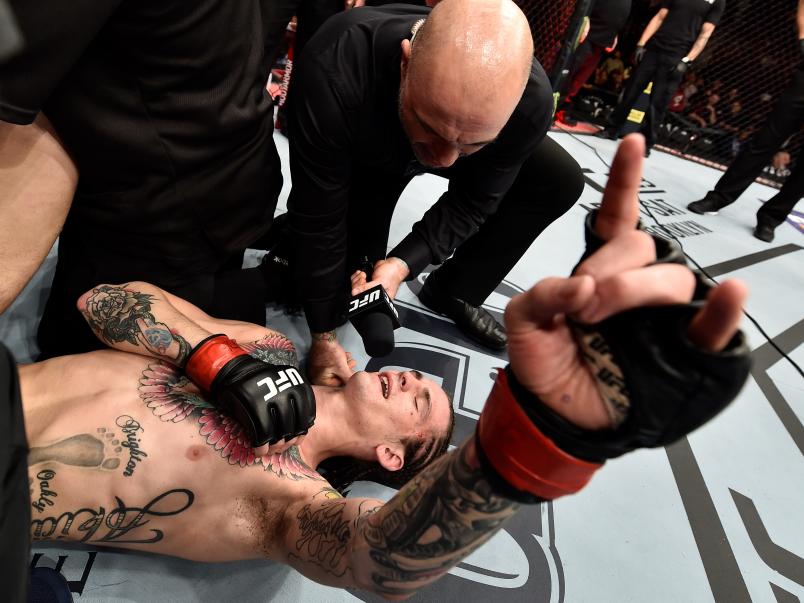 LAS VEGAS, NV - MARCH 03: Sean O'Malley is interviewed by Joe Rogan after his unanimous-decision victory over Andre Soukhamthath in their bantamweight bout during the UFC 222 event inside T-Mobile Arena on March 3, 2018 in Las Vegas, Nevada. (Photo by Jeff Bottari/Zuffa LLC/Zuffa LLC via Getty Images)

LAS VEGAS, NV - MARCH 03: Sean O'Malley is interviewed by Joe Rogan after his unanimous-decision victory over Andre Soukhamthath in their bantamweight bout during the UFC 222 event inside T-Mobile Arena on March 3, 2018 in Las Vegas, Nevada. (Photo by Jef

“The first two fights I got pulled off of, I went through a full training camp and got pulled off a couple weeks before the fight,” he said. “So, I've been through the fight camps. I've done two fight camps and also had two surgeries, so I've been training, and nothing really changes whether I have a fight coming up or not. It's the same lifestyle - the gym once a day at least, at least nine, ten practices a week - whether I'm in camp or out of camp. The last two years have basically just been in a not as intense fight camp. I'm still training just as much as I would be. The only thing that changed is that I didn't have fights.”

There were some competitions, though, most notably the Quintet grappling event last December that saw him face off with UFC vets Takanori Gomi, Gilbert Melendez and Hector Lombard.

“I got to choke out Takanori Gomi, and I went the distance with Gilbert Melendez, so I got to show where my grappling skills have improved,” said the Brazilian Jiu-Jitsu purple belt. “I've competed a couple different times in grappling, so I find little things to do, and if I don't have anything, it's knowing that someday, whether it's 2020, 2021, 2022, I'm still in my 20s and one of these days I'm gonna fight. I'm not gonna look back and think, 'I wish I would have been training, I wish I would have been improving.' Because I have been improving. I've known there's gonna be the end of that rainbow; I just didn't know when. So I was able to keep a strong mindset and just keep improving.”

When O’Malley speaks of his grappling exploits, it’s matter of fact, like he was competing against just some guys. But he knew who he was up against in the trio of Gomi, Melendez and Lombard, and the respect is evident. It’s just that O’Malley gets some pretty tough looks in the gym on a daily basis, so he’s not exactly going to be intimidated by anyone.

“I know exactly who they are and how good they are, but I train with that high level of guys every day, so it wasn't like I went in there and it was, 'Holy cow.' I train with Augusto Mendes, who just won the ADCC worlds at my weight, so I train with the best motherf**kers in grappling. So, it was like going in there and training with some more good guys. The whole Quintet thing was an awesome experience.”

And it reminded him of what awaits him this Saturday. “The Sugar Show” is back, and no one missed seeing Sean O’Malley in the Octagon more than Sean O’Malley, who has his plans all set for Mr. Quinonez.