The Return Of Jimmy Flick

After A Brief Retirement From MMA, Flyweight Prospect Jimmy Flick Is Back And Ready To Make A Splash In His Octagon Return At UFC Fight Night: Strickland vs Imavov
By Gavin Porter, On Twitter @ItsGavinPorter • Jan. 13, 2023

It’s unusual for a fighter to retire after their UFC debut, especially when that debut resulted in a spectacular first-round flying triangle choke victory. But that’s what was best for Jimmy Flick at the time, and he decided to hang up the gloves.

There were a handful of factors that went into Flick’s decision, the biggest being that he wanted to dedicate more time to his family.

“Long story short, I’ve been a family man my whole life, I’ve been working a full-time job and chasing this career,” Flick told UFC.com. “I had a wife of 11 years and we split up and that was one of the reasons I gave up fighting. I wanted to be there for my her more and for my kids more because I was gone throughout our whole relationship.”

But as life typically goes, some things changed and more than two years after that debut win, Flick is primed to make his return to the Octagon at UFC Fight Night: Strickland vs Imavov. 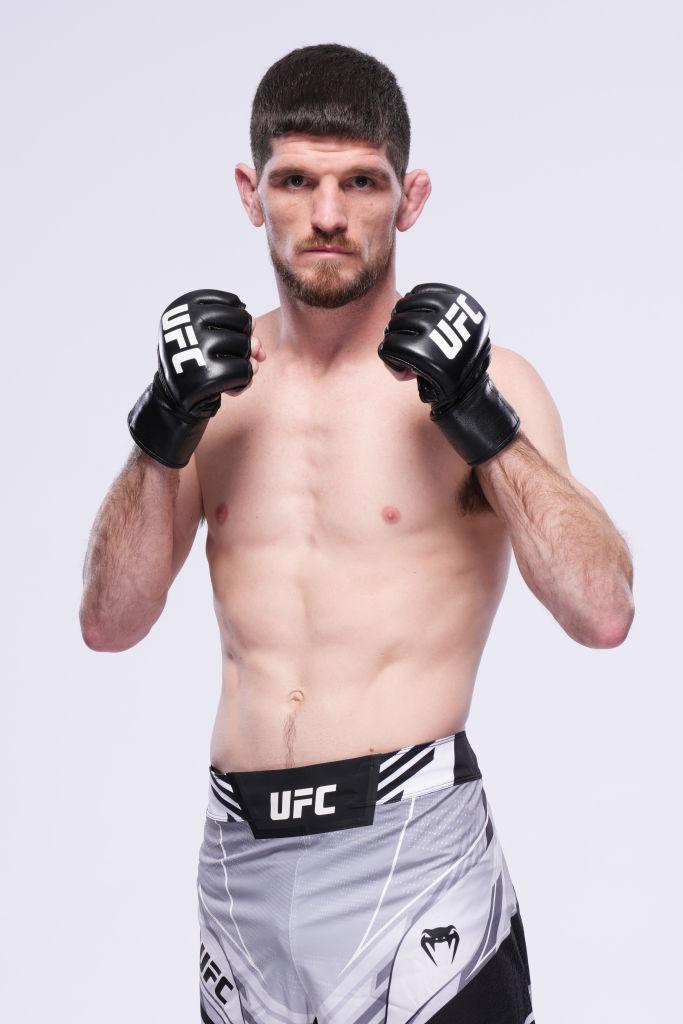 Jimmy Flick poses for a portrait during a UFC photo session on January 11, 2023 in Las Vegas, Nevada. (Photo by Mike Roach/Zuffa LLC)

“I’ve got a lot of good feedback about coming back to the UFC. A lot of people are excited to see me back. The circumstances weren’t great, but I don’t regret any of my decisions and I think life is just going to get better over the horizon,” Flick said. “I’m glad the UFC accepted me back and now I’m back to fighting for myself and for my goals. I got a 10-year-old and five-year-old, and they will be here Saturday night and I’m excited to go out there and show them that daddy is chasing his dreams.”

In addition to his having his daughters in attendance, Flick’s father will be in his corner for the first time in over five years.

Having the support of his family has given Flick renewed energy and helped him start off his second stint with the UFC in the best way possible. When he retired, he gave up everything. No running, no training, no jiu jitsu, nothing.

Quitting cold turkey was a crazy adjustment for Flick, who has had a lifelong passion for jiu jitsu and finished 12 of his 14 wins by submission. But the 32-year-old was able pick it back up after a year-and-a-half and feel like everything came right back to him.

But will he be able to land a flying triangle submission in his comeback fight?

“Oh 100%,” Flick laughed. “I think I have a tough opponent. It’s going to make it a lot tougher to do what I did last time, but nothing is impossible. I’ve proved it before, and I plan on proving it again on Saturday night.”

Standing across from Flick will be Charles Johnson, who earned his first career UFC victory in his last trip to the Octagon. It’s a good matchup for the Oklahoma native – one that will help him gauge where he stands in the booming flyweight division.

“I like Charles. He’s a great dude, he brings the energy, the excitement, the fight. The guy’s mentality is non-stop, just like my mentality,” Flick said. “I think we are going to meet in the middle of the cage and find out who wants it more.”

Flick is willing to bet that when the dust settles it’ll be clear that he wanted it more than Johnson. Becoming the first fighter to finish Johnson would prove that point and be the perfect way for Flick to reintroduce himself to fight fans.

Flick has his fingers crossed that he’ll earn a bonus and be able to take his daughters on vacation after the fight but, if he’s being honest, no matter how things go, if he gives it all he’ll be proud of the outcome.

“No matter what happens, I’m back in the UFC and that’s what matters most,” Flick said. “I am just so happy to be back and I’m going to leave it all out there.”