The Force Is With Steven Koslow

“Obi Won Shinobi The Pillow" Is Set To Make His UFC Debut This Weekend At UFC 282: Błachowicz vs Ankalaev
By Thomas Gerbasi, on Twitter: @TGerbasi • Dec. 8, 2022

Josh Samman didn’t live long enough to see Steven Koslow earn one of his foundation’s scholarships or get the call to the UFC, but when the Jacksonville native makes his first walk to the Octagon to face Cameron Saaiman this Saturday, you can rest assured that the late UFC veteran would have been proud.

“I've been with Combat Night basically the entirety of my career, except for maybe two or three amateur fights, and he created Combat Night along with Mitchell (Chamale), so it is pretty interesting that I get to go to the UFC being born and raised from Combat Night,” said Koslow, a pro since 2019 who did meet Samman through Chamale before his untimely passing in 2016.

“I met him a handful of times,” said Koslow. “My good friend and mentor, Mitchell Chamale, was his best friend, so even though I really didn't get to hang out with Josh and get to know him, I've gotten to know him through his best friend, and I read his book and watched his documentary, so it's almost like I know him without ever getting to know him. I'm bummed I never got to hang out with him and get to know him as a person, because I've heard so many good things, but he's made an impact on so many people's lives that I'm close to. It's unique.”

Unique is a good word to describe Koslow, who may own the longest nickname in MMA with “Obi Won Shinobi The Pillow,” but his personality and journey goes way beyond a catchy moniker and just 25 years on the planet.

“People think I'm a lot older than I am whenever they meet me,” he laughs. “I don't know why, I guess it's just from the fights - they age my face. But whenever I tell them I'm 25, they're surprised. They think I'm five years older and closer to 30. I don't know if that's a good thing or a bad thing, but I'm just happy.” 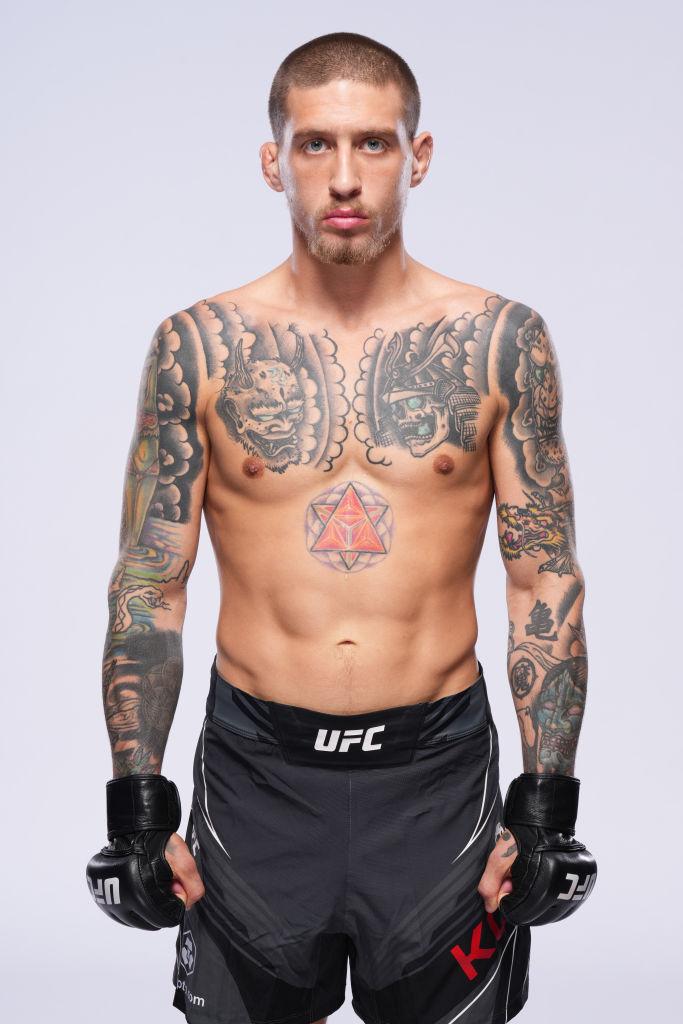 Steven Koslow poses for a portrait during a UFC photo session on December 7, 2022 in Las Vegas, Nevada. (Photo by Mike Roach/Zuffa LLC)

He’s got reason to be. He’s perfect in six fights as a pro, he’s about to make his UFC debut on one of the biggest cards of the year in front of a full house at T-Mobile Arena in Las Vegas and, most importantly, his mom is happy.

“My mom told me recently that her heart is full of joy, her heart is so full,” said Koslow. “That means more to me than anything in the world. My mom is a major factor in this. She supported me from Day One, and her mom as well, my grandmother, she's supported me immensely, from watching every fight to casting voodoo on my opponents. (Laughs)”

With his nickname, you would have thought grandma would have been working on some Jedi mind tricks. Koslow laughs, but when asked which one of the ladies in his life is the one praying in her room on fight night, he says, “That's my grandmother - she's the one praying in the room. She don't smoke in the house, but she smokes for my fights. (Laughs) My mom has been to a few of them. She hasn't been to every one, but she's made it to as many as she could. She works full-time as a bail bondsman. My parents have been bail bondsmen and bounty hunters my whole life, so that's what she's done and she's supported me since Day One.”

The Steven Koslow story keeps on giving, doesn’t it? Being the son of bounty hunters has to be interesting, eh?

“Before I really started MMA when I was a young kid, I thought I wanted to be a bounty hunter just like my dad and it just didn't happen that way,” he said. “And I'm thankful I get to actually live my dream and not have to settle for less. Bounty hunter is a cool gig, but it's not what I wanted to do with my life. I want to be UFC champion, so the fact that I get to take one step towards my dream this Saturday is more than I can ever ask for.”

Mom and grandma will be watching his dream. Unfortunately, Koslow’s dad won’t be, as he passed away earlier this year. Thankfully, father and son mended fences after some rough times that even had Koslow writing on his UFC bio form that he started training “because I wanted to beat up my dad.”

“That is a major reason why I joined the gym around 14, 15 years old,” Koslow said. “I got a punching bag around that same time. We were going through it back then, and that was a major motivation for me. I wanted to get strong enough to beat up my dad. And whenever I got to the point to where I turned into the man of the house and he became a little older, he got sick and I got strong, so I never got a chance to square up with him the way I wanted to, but it is what it is. We had our differences, but I know he had unconditional love for me and he always has, and if he was here today, he would be so proud.”

That’s a guarantee. Not many make it to this level, even fewer have the potential to one day wear a championship belt. Koslow made it, and he’s got that potential. Now all he’s got to do is win on Saturday night, and he’s ready to do just that.

“It will be just another day in the office,” he said. “Of course there will be jitters and anxiety and I'll be nervous, but once I'm making that walk and I get patted down and hug my teammates and I step into the cage, it's bliss. It's beautiful, and it's everything I'd ever want, so I'll be more than prepared. Ever since I started, I knew I wanted to be UFC champion. It's just part of the plan.”