The Education of Louis Smolka

Louis Smolka is learning how to balance his passion for fighting and learning as he gains more experience.
By Thomas Gerbasi, on Twitter: @TGerbasi • Sep. 11, 2019

UFC bantamweight Louis Smolka may not go as far as to call himself a Californian yet, but it’s safe to say that he’s settled in his new digs, even if he gets a little homesick at times.

“I love California, it feels like a second home now, but I still do miss Hawaii,” said Smolka. “I miss my friends, I miss the beach, I miss a lot of different things. It’s my home, I grew up there, I spent the first 28 years of my life there and it will always be home for me. But California has been great and it’s been a really positive change for me.”

A member of Team Oyama in Orange County for close to two years now, Smolka vanquished some demons, ended a losing streak and started winning again, eventually earning a call back to the UFC in late 2018 after nearly a year away. So if Smolka feels a certain way about California, that’s no surprise.

“I feel pretty positive,” he said. “I’m working, I’m enjoying the process and I’m trying to do my best every day.”

The result has been four wins in his last five fights, with the only loss coming in his most recent bout against Matt Schnell in March. It was a disappointing setback, but not one that will break the spirit of the 28-year-old, who draws a chuckle from his interviewer when he talks about training with the “young up and comers” up in Big Bear while preparing for his Saturday bout against Ryan MacDonald.

“That’s how it is,” he deadpans. “It’s a young man’s sport. I feel like you’ve got to keep a childlike mindset and try to constantly learn so you keep evolving. Being stagnant is the enemy in our sport.”

“I try not to,” Smolka laughs. “I act like a child. I’m super immature. But realistically, I am pretty old.”

Seriously, though, he has a point when it comes to keeping a young approach to the sport in terms of learning and evolving. Despite his talent and track record, Smolka is well aware that he doesn’t know everything about the sport but, at the same time, he’s learned that too much of a good thing can be a bad thing. 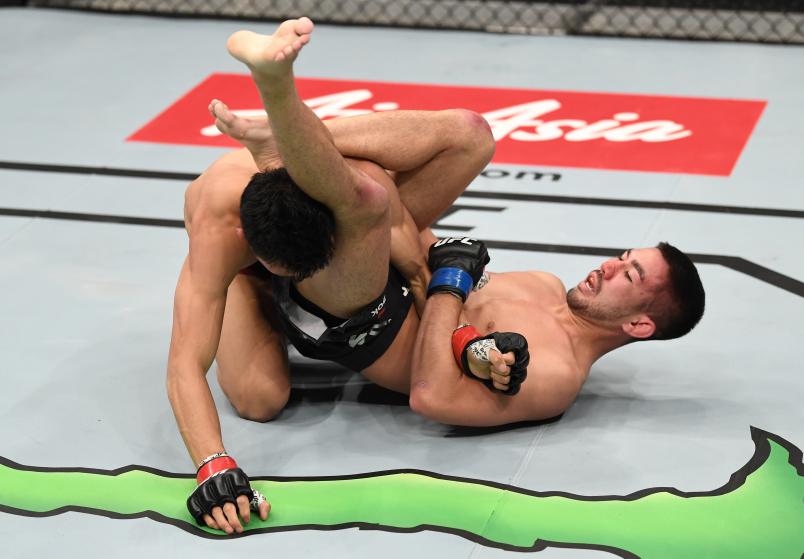 BEIJING, CHINA - NOVEMBER 24: (R-L) Louis Smolka attempts to secure a submission against Su Mudaerji of China in their bout during the UFC Fight Night event inside Cadillac Arena on November 24, 2018 in Beijing, China. (Photo by Jeff Bottari/Zuffa LLC)

“It (fighting) is my passion, it’s what I love to do and I constantly think about it, but there’s times when you need to let it go,” he said. “Late at night, I used to have problems where I would just constantly think about the fight. I would go on for hours and before I know it, it’s three or four in the morning and you gotta be up at nine for practice. And it just eats you alive. It’s one of those things where you’ve got to be able to let go. There are times when you need to stop.”

Call it the education of Louis Smolka, and with each passing lesson learned and test passed, he’s getting better, both in and out of the Octagon. And for now, he’s fine with that.

“I just know that if I didn’t do this, I would feel like something is missing in my life,” he said. “There are days when I hate this. I’m so exhausted, so tired, my body’s beat up and I can’t wait to retire. But I know that as soon as I retire, I’m gonna miss it. So I’ve decided to give it my all and do my best while I still can.”