The Dominance Of Israel Adesanya

There’s a commercial that runs frequently on UFC FIGHT PASS featuring Israel Adesanya sitting in a chair and explaining that he wants his career to be remembered for those “iconic” moments in the sport of MMA. It’s less a daydream or a wish than a pure manifestation.

11 fights into his UFC career, the middleweight champion’s reel is already resplendent with the sort of moments that make the sport special. There was the arrival: a TKO of Rob Wilkinson in front of an adoring Perth, Australia crowd at UFC 221. The first-round TKO of Derek Brunson during Adesanya’s Madison Square Garden debut. Going the distance with forefather Anderson Silva in MMA’s version of the Spiderman meme. One of the all-time great fights in UFC history for his 25 minutes with Kelvin Gastelum for the interim middleweight title. In less than four years in the Octagon, his résumé is already one that’s envied by many.

But on the scale of iconic moments to date for “The Last Stylebender,” it’s hard to top his middleweight championship unification bout vs Robert Whittaker at UFC 243. In a packed Marvel Stadium, over 57,000 exuberant Aussies and Kiwis broke the UFC attendance record to watch as Adesanya finished the reigning champ with a startling, definitive second-round KO. 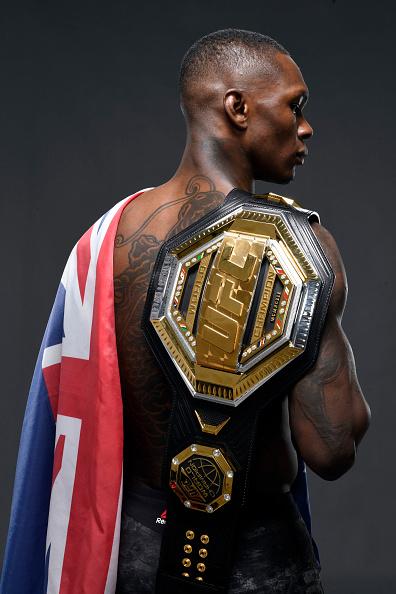 “I want to give people a certain feeling when I fight, whether they love me or hate me. Even if they hate me, I want them to feel like, ‘Oh, come on. I hope he...’ Like in the first Whittaker fight, I could feel the energy in the crowd was just like, "I hope this **** gets knocked out." Because I come in there f****** showing off, dancing. I know, I could feel it. They were just like, ‘F***, it'd just be awesome if this guy just gets dropped in the first round by Whittaker,’ and then that's it. I could feel it. But I thrive off that. I thrive off that energy, whether it be good or bad. I just want to give people that feeling.

“I don't focus on numbers. Those kind of things, I feel like they're fleeting. Not really, they stay there, if they're in the record books, they're in history. But I've already achieved some stuff in the record books that's going to be there in history forever. But for me, it's about the feeling. That's what I care about. The feeling I give people when I fight, the anticipation.”

The electric crowd in Melbourne, Australia was filled with “that feeling” in late 2019 as Adesanya hoisted the undisputed strap.

“After the last Whittaker fight, I was happy. One thing I was really proud of was that every person with a Stylebender shirt, everyone that was supporting me could walk out of there with their head held high. And that was beautiful. Because a lot of Kiwis flew over for that fight. And to walk out of that stadium with their head held high, like, "Yeah, our guy won." That feeling is going to sit with them forever. So it’s those kind of feelings I want to create in people. I don't really care about numbers and all that s***. They'll just follow me eventually.”

It’s a feeling fans in Houston will look to get a little taste of Saturday night as the rematch with Whittaker once again takes center stage in the middleweight universe just over two years later. As he reflects on the challenge ahead, Adesanya wrestles with the relative ease of his first fight and the evolved Whittaker he’s sure to see in UFC 271’s main event. Striking coach Mike Angove breaks down the dilemma.

“There's a risk that if you've beat a guy comfortably, you are going to be a little bit complacent. The other aspect is you're familiar with them. You know some of their rhythms and habits already, so some of the intellectual capital’s still there, but you know, you don't live in isolation. You don't live frozen in a moment in time. So you've got to move on from that. You've got to look at what changes have occurred. What are the changes to the other fighter, to the opponent and be aware of those, because they will obviously adapt? So we expect that with Rob here. I know he needs leaves no stone unturned. So we expected a really, really sharp performance with him last time, driven by emotion over aggression. This time, we expect much more care and due diligence from him. Which makes him more dangerous because he does have that ability to bridge the gap and he's got real pop in both hands.”

“It also makes me prepare more,” says Adesanya. “Because then there's no way I can let this guy get one over me when I've beat him in the fashion I've beat him before. So yeah, it just makes me put my head down and work harder. And the fact that he admitted finally that I was in his head, which confirms to me what I already knew, so I'm a lucky bet. Does it feel different than the first time? Yes. Because I already whooped his ass.

“I didn't beat him at my best,” he continues. “This fight camp, I've changed a lot of things outside of the cage that I needed to focus on. I've cut a lot of dead weight and I feel like I can kind of focus now more on the game. I'm free now. That's a dangerous thing to give myself is freedom. And then when I have ultimate freedom in being able to do what I want to do without any limitations, that can go two ways; but right now, the way it's going, it's in my favor. This is the best I've come into a camp. As in, I've come into a camp in shape, this is the best I've felt. So yeah, I'm very optimistic about this fight. Very. I'm like Optimist Prime.” 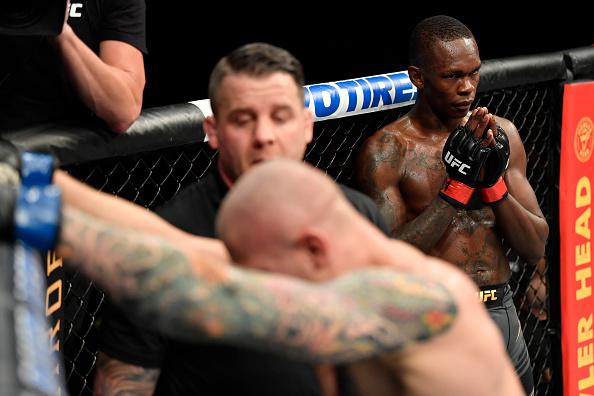 Israel Adesanya of Nigeria apologizes after landing an accidental low blow against Marvin Vettori of Italy in their UFC middleweight championship fight during the UFC 263 event at Gila River Arena on June 12, 2021 in Glendale, Arizona. (Photo by Jeff Bottari/Zuffa LLC)

Israel Adesanya of Nigeria apologizes after landing an accidental low blow against Marvin Vettori of Italy in their UFC middleweight championship fight during the UFC 263 event at Gila River Arena on June 12, 2021 in Glendale, Arizona. (Photo by Jeff Bott

The optimist is also taking some pleasure in seeing familiar faces on his journey. In addition to the Whittaker rematch, his previous bout was a rematch with old foe Marvin Vettori, a series Adesanya owns. Derek Brunson has won five straight since his loss to Adesanya and is knocking on the door, eager to avenge.

“I love what I do, I love this game, I love where I'm at in my career. I'm motivated to lap the division again. I find that exciting, to be able to fight him, then maybe even get one or two new challengers. It would be nice. But to lap the division again, that motivates me. So if my next three fights are rematches, it doesn't bother me. I'm just going to do it again. And then when I do that, that shows true dominance, that he lapped the division at the top, and then did it again.”

There’s a word for that, and Adesanya knows it well.

“Dominance. We're looking at it,” he says. “Pretty much what I've done throughout my UFC career, throughout my fight career, to be honest. Being dominant. Just being at the top for a long period of time. And then when you get to a new level, reaching the top even, fast with the speed that I have, and staying there. Like everyone always says, ‘It's hard to become champion, but it's harder even staying champion.’ So yeah, the way I have handled my reign in the UFC as a middleweight king, that's showing dominance.”