The Best Of Tony Ferguson

Look Back At Some Of UFC Lightweight Tony Ferguson's Best Moments Ahead Of UFC 274.
By Gavin Porter, On Twitter @ItsGavinPorter • May. 3, 2022

From The Ultimate Fighter to becoming the interim UFC lightweight champion, Tony Ferguson has had some incredible moments in the Octagon.

Fans fell in love with his personality, his breakdance moves and, most importantly, his fights. Ferguson ripped off a 12-fight win streak from 2013 to 2019, blazing a trail of destruction along the way.

Overall, Ferguson has gone 15-4 inside the Octagon, earning six performance bonuses and six Fight of the Night bonuses. His UFC 274 bout this weekend with Michael Chandler has all the ingredients to add to that bonus total.

But before we move on to his highly anticipated bout with Chandler, let’s look at some of “El Cucuy’s” best work so far. 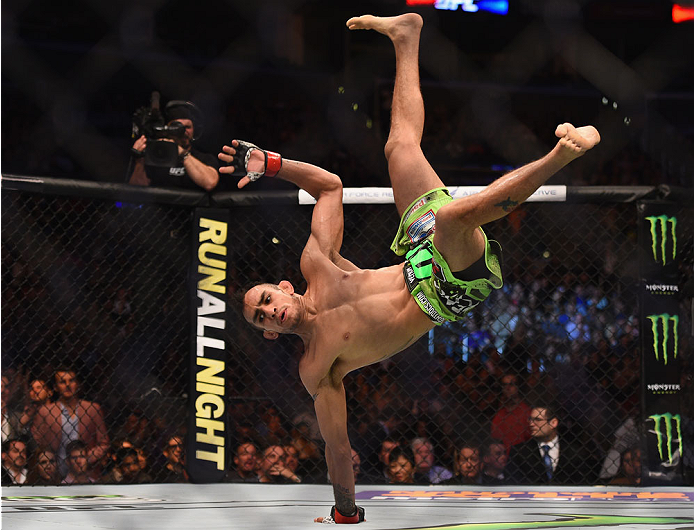 Ferguson entered his UFC 184 bout with Gleison Tibau looking to make a statement and move up in the lightweight pecking order. So, what did Ferguson do? He swarmed Tibau, connecting with a flurry of punches that hurt the lightweight veteran.

He then stalked Tibau as he backed up against the cage and turned Tibau’s desperation shot against him. Ferguson put the pressure on and refused to let him recover. Ferguson got to Tibau’s back, flattened the Brazilian out, grabbed the neck, and forced the tap. It was the biggest test of Ferguson’s career, and he came through in a big way. 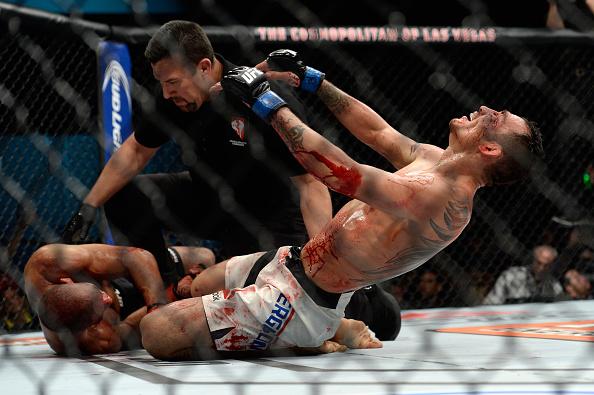 LAS VEGAS, NV - DECEMBER 11: Tony Ferguson reacts to his victory over Edson Barboza in their lightweight bout during the TUF Finale event inside The Chelsea at The Cosmopolitan of Las Vegas on December 11, 2015 in Las Vegas, Nevada. (Photo by Brandon Magnus/Zuffa LLC/Zuffa LLC via Getty Images)

The Top 10 lightweight showdown between Ferguson and Barboza guaranteed fireworks and it absolutely delivered. From the start, the pace was insane, with both men landing power strikes and unleashing their diverse arsenal of attacks.

In the second round, both fighters landed devastating elbows that opened significant cuts on one another. With crimson covering the canvas, Barboza went for a takedown, and when he did, Ferguson turned it against him, quickly sinking in the D’Arce choke that left Barboza tapping. This fight absolutely lived up to the hype and proved that Ferguson was truly one of the best in the world. 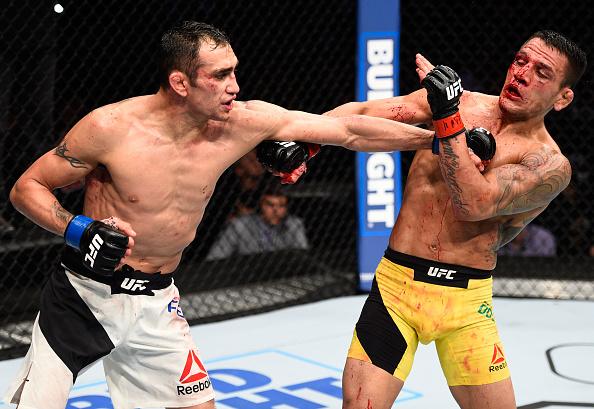 Tony Ferguson’s finest performance might have come in The Ultimate Fighter Latin America 3 Finale. Ferguson dominated former UFC lightweight champion Rafael Dos Anjos for 25 minutes in Mexico City to make it clear he was next in line for a shot at the UFC lightweight title.

Ferguson was able to dominate using his range and length to keep RDA at bay, all the while landing a variety of devastating strikes to damage him. It was incredible and showed that Ferguson was simply on another level. 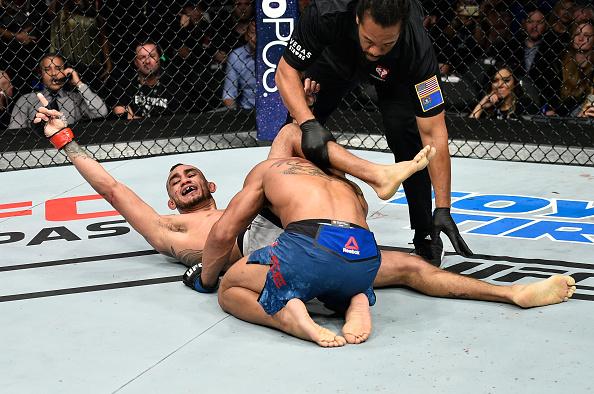 The highly anticipated interim UFC lightweight title bout between Ferguson and Kevin Lee lit up Las Vegas. Ferguson was patient to start the bout, picking his moments while his confidence rose until Lee was able to sit Ferguson down and pursue him as he fled. That’s when Ferguson connected with beautiful shot that put Lee on the canvas. Lee would recover quickly and go on to establish some great ground-and-pound strikes after thwarting Ferguson’s submission attempts. It was a strong round for Lee.

When the round was over, Lee was fired up and talking o Ferguson. Little did he know that “El Cucuy” would have his revenge.

In round two, Ferguson started finding his range while Lee started to slow down. It was a much better round for Ferguson, but Lee was able to shake off the fatigue and start the third frame off strong.

Lee secured two takedowns, the second of which Ferguson threatened with an armbar before he was able to escape. Ferguson started landing some great elbows from the bottom, forcing Lee to make some defensive adjustments. That’s when Ferguson locked in a triangle choke out of nowhere. Lee hung on for a few seconds but in the end the choke was too tight, and Tony Ferguson climbed to the top of the Octagon and let out a triumphant yell.

It was an amazing moment for a guy who absolutely deserved it. 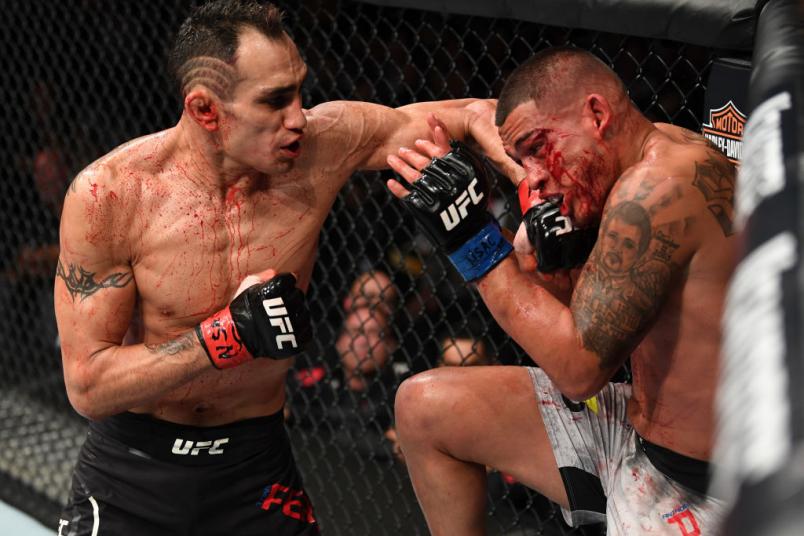 Man, oh man, did Tony Ferguson vs Anthony Pettis deliver. This was one of the craziest fights you’ll ever see, with both Ferguson and Pettis hurting one another time and time again. The fight only lasted two rounds after Pettis suffered an injury, but if you haven’t seen this one, do yourself a favor and watch this 2018 Fight of the Year contender.