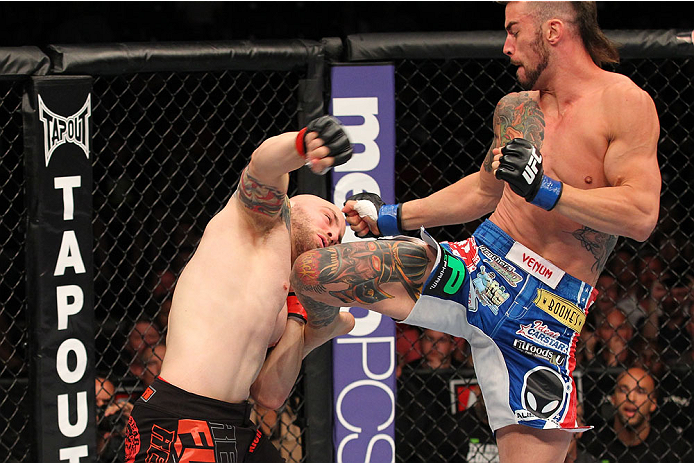 The Fight of the Year race is expected to get an early entrant on Saturday, February 14, as the strikers' battle between Colorado's own Brandon "Rukus" Thatch and Stephen "Wonderboy" Thompson now has two extra rounds, with the UFC announcing Tuesday that the bout has been moved into the five-round UFC Fight Night main event slot in Broomfield.

The bout replaces the original main event between Matt Brown and Tarec Saffiedine, which was scrapped when a suitable replacement opponent could not be found for the injured Saffiedine.

"The Immortal" Brown won't be without a fight for long though, as the Ohio standout will now face off with former UFC welterweight champion Johny "Bigg Rigg" Hendricks at UFC 185 in Dallas, Texas on March 14.
Tickets for UFC 185 at American Airlines Center, which is headlined by the UFC lightweight title bout between Anthony Pettis and Rafael dos Anjos, will go on sale Friday, January 23. Tickets for UFC Fight Night in Broomfield are on sale now.

Unbeaten in his last 10 fights dating back to 2009, Thatch has used his varied striking attack to finish both Justin Edwards and Paulo Thiago in the Octagon, and after a layoff of over a year due to injury, he intends to pick up where he left off against Thompson.

Currently on a four-fight winning streak, South Carolina's Thompson defines the word "dynamic" when it comes to his stand-up game, and after a trio of wins over Chris Clements, Robert Whittaker, and Patrick Cote, "Wonderboy" is on the verge of contendership in the stacked welterweight division.
Winner of seven of his last eight, Brown may have seen his win streak snapped by number one contender Robbie Lawler in July of 2014, but the Fight of the Night battle proved the Ohio native's spot among the welterweight elite is more than secure.
Looking to eventually finish up his trilogy with Robbie Lawler and get his UFC welterweight title back, the hard-hitting Hendricks first has to deal with Brown in a battle expected to be one of the most explosive of the first half of 2015.