Thales Leites: "The UFC is My Home"

"To me, the UFC is my home. It’s where I’ll be for a long time and I want to be fighting as much as I can in the UFC." - Thales Leites 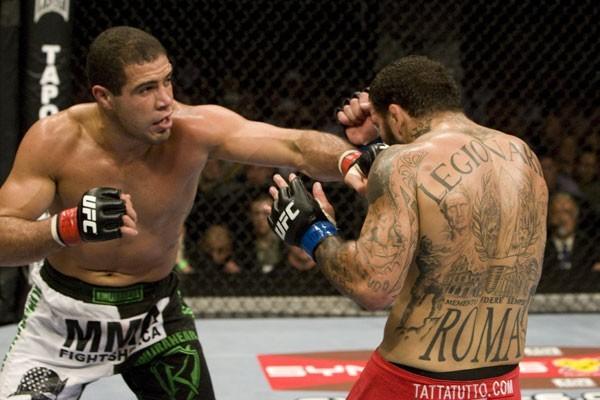 The last time I saw Thales Leites was nearly three years ago in Philadelphia. The UFC 101 post-fight press conference was going on and the Brazilian middleweight contender had a look of disbelief on his face, as if he couldn’t come to grips that he had just lost a three round split decision a couple hours earlier to Italy’s Alessio Sakara.

“I couldn’t believe it,” said Leites, and he wasn’t the only one who disagreed with the verdict. “I don’t agree that I lost that fight, but at the same time, I committed many mistakes, and at the high level of MMA, especially in the UFC, if you commit a mistake you can pay a high price. And that’s what happened with me. I had a chance to submit him and I had many chances during the fight. I took his back, I got an arm in half guard, and I didn’t submit him. So two of the three judges saw his victory and there’s nothing I can do.”

The loss was Leites’ second straight, with the first coming in a five round championship fight against Anderson Silva at UFC 97. That bout got widely panned for being less than an exciting affair, and the Sakara fight was no better. Shortly after the UFC 101 bout, Leites was cut from the promotion.

“A hundred percent I was surprised,” he said. “I didn’t expect it because I came from a title shot, and after the title shot they gave me a fight on the undercard, which was a little bit weird. And then they cut me.”

Admitting that he was “upset at the moment,” Leites suddenly saw a 5-1 UFC career turn into a 5-3 one that was basically boiled down to the last two losses and not his wins over the likes of Nate Marquardt, Ryan Jensen, and Drew McFedries. It was a devastating blow, but fighters fight, and four months later, Leites was back, decisioning UFC vet Dean Lister.

Over the next three-plus years, the Rio de Janeiro native put his career back together, winning six of seven post-UFC bouts and beating Jesse Taylor, Jeremy Horn, Tor Troeng, and Matt Horwich in the process.

“I got my mind straight again, and today, I see that it (being cut) was good for me because I’m more mature, I’m more confident in myself, and everything is better now.”

Leites, a longtime member of the renowned Nova Uniao team, also got to see several of his teammates, most notably featherweight champ Jose Aldo and interim bantamweight titlist Renan Barao, grow up into elite fighters right before his eyes.

“To me, it’s great, it’s amazing,” said Leites of his teammates’ success. “From my team I was the first guy who got the title shot, and it was really good. Then came all these guys that have been training for a long time, and I’ve known them since the beginning. They’ve trained very well, dedicated a hundred percent of their time to learn and compete, and they believe in themselves every single moment. We have two UFC champions, Renan Barao and Jose Aldo, who are great champions and great people, and they inspire everybody from our team inside the Octagon and outside of it.”

The only thing left was for Leites to get his second shot, one he desired even more than usual after attending the UFC 134 event in Rio in 2011.

“I was just watching and the energy was amazing,” he said, the excitement clear in his voice. “When a fighter from Brazil got in the stadium, all the crowd said their name, and it was amazing. I looked at that and I said ‘I want to get back, I have to get back. I have to feel this energy.”

Earlier this year, the 31-year-old’s number was called. He was coming back to the Octagon, and in Rio de Janeiro no less, to face Tom Watson on this Saturday’s UFC 163 card. He has no excuses for anything that happened in his last two UFC bouts, only that the fighter showing up this weekend is not the same one they saw in 2009.

“I can’t change the past, but I can build a new future, and that’s what I’m doing,” he said. I’m older, stronger mentally and physically, much more confident, mature, well-trained, and everything is better now to me. I’m feeling great, I had a great camp for this fight, and I’m a hundred percent ready. I want this victory more than ever, and I will beat this guy for sure.”

“To me, the UFC is my home,” he said. “It’s where I’ll be for a long time and I want to be fighting as much as I can in the UFC. I won’t make the same mistakes I made before and I will do my best in every fight.”