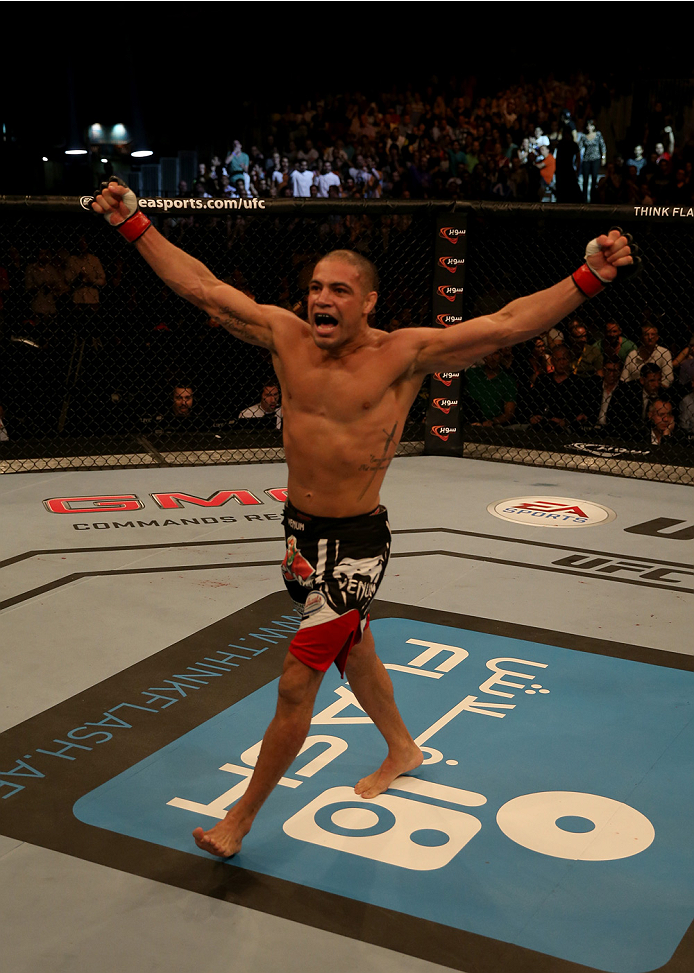 For years, Thales Leites was the “jiu-jitsu guy.” That’s not an insult, and when it comes to the gentle art he’s one of the best in mixed martial arts, but you had a good indication that on fight night, if he had his druthers, he was going to take his opponent to the mat and submit him.

He doesn’t deny it either.

“Sometimes during a fight when I hit my opponents strong and they feel my punch, I was going to take them down,” Leites admits. But when he did land, you could tell that the middleweight from Brazil could crack a bit. And his coach at Nova Uniao in Rio de Janeiro, Andre Pederneiras, knew it too.

“He (Pederneiras) came to me and said ‘Thales, you have heavy hands; when you hit your opponent, move forward and try to knock him out.’”

What followed was plenty of work on Leites’ hands in the gym, and when he got his chance in a fight against Trevor Smith in April, he pounced.

“During my fight I hit my opponent with an overhand, he fell and I didn’t stop,” Leites, who halted Smith in just 45 seconds, said. “It wasn’t a surprise to me and my team because we’ve been training for a long time, and what was missing before was the confidence to exchange more.”

Now that confidence is there, and when you add in his already-present ground game, Leites has been a new fighter since coming back to the UFC in 2013, and this Saturday he will put his three-fight Octagon winning streak on the line against Francis Carmont.

“I’m feeling great, I’m feeling more confident each time, and this time won’t be different,” he said. “I’m going forward, looking to knock him out or submit him every time.”

During his first UFC run in 2006-09, Leites was capable of entertaining fights, and he did win five of eight bouts, but that time in his career will likely be remembered for his five-round snoozer with then-middleweight champion Anderson Silva in 2009. In his next fight, he lost a decision to Alessio Sakara that most believed he won, but since the fight was so dreadful to watch, few protested the verdict.

Leites was cut after the bout, and after regrouping and dealing with some injuries, a 6-1 record brought him back to the Octagon. This time, he has looked like a legitimate contender again, and after beating Smith, he clocked in at number 15 in the current middleweight rankings. A win over the 12th-ranked Carmont will likely move him up even further.

“I saw his last fights, and he lost to two of the top guys in the world in the middleweight division in Ronaldo “Jacare” and CB Dollaway,” Leites said of his opponent. “He lost the fights, but he fought until the end. He’s a tall guy, he likes to use his hands and his front kick, and all I know is that I can’t let him like the fight. I have to walk forward and make him not like the fight. It’s what I’ve been training for for a long time, and it’s time to show to the world that I deserve to be in the top 10.”

What a difference a year makes, or as the 32-year-old Leites correctly points out, a year and 20 days. When he steps into the Octagon with Carmont, it will be that length of time since his return against Tom Watson last year, and while he’ll take a win any way he can get it, since he’s knocking people out now, would he prefer a KO or submission?

“The feeling of a submission is great,” he said. “I’m a jiu-jitsu fighter and I’ll always represent Brazilian Jiu-Jitsu. I love it and I’m proud of it. But this is MMA and you have to be ready for every situation. The feeling of the knockout is great, but the submission, for me, is wonderful. If I have to choose, it doesn’t matter during the fight, but for me, the submission’s better.”