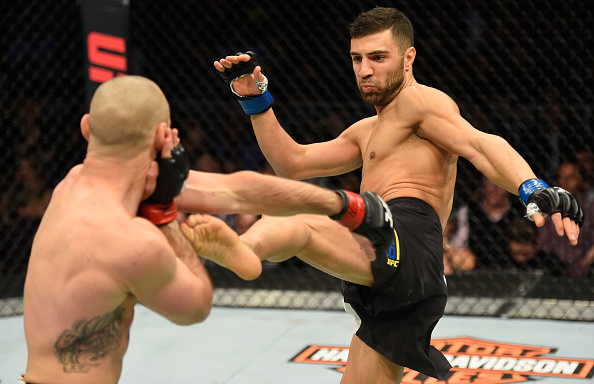 Elevated to Saturday’s UFC 209 co-main event after the Tony Ferguson-Khabib Nurmagomedov bout was scrapped, lightweight up and comers David Teymur and Lando Vannata put on an exciting show for the fans at T-Mobile Arena, with Teymur pulling off the upset victory via unanimous decision.

Both Vannata and Teymur fought as if they had to prove themselves worthy of their placement on the card, thrilling the fans in the process as they traded power shots throughout the opening round. Not surprisingly, Vannata fired off the flashier techniques, but Teymur was right there with him with his more traditional attack. Midway through the round, Vannata briefly staggered Teymur, but the Swede responded with a series of close range knees that evened the score.

Teymur, bleeding from a cut over the left eye, began landing more and more flush shots in the second round and even scored a brief takedown, but Vannata shook off the blows and kept marching forward, seemingly immune to the attacks of his foe.

The high level striking action didn’t let up in the final round, and the fight remained brutally tough to score. Teymur may have sensed this, as he landed three takedowns that may not have kept Vannata grounded, but they did score important points in a close fight, one a lot closer than the final judges’ scores would indicate.

The Melbourne miracle man did it again, as Daniel Kelly upset Rashad Evans and spoiled the middleweight debut of the former UFC light heavyweight champion via split decision.

The first round was an interesting one, with Evans holding the edge thanks to his speed and varied offensive attack, but Kelly stayed competitive with his unorthodox striking and solid grappling.

Kelly’s confidence was evident in the second stanza, as he pressed the action and drilled Evans with a left hook that momentarily stunned him. Even taking an accidental eye poke didn’t stop the four-time Australian Olympian, but Evans kept mixing things up, landing with a couple hard body kicks and getting a brief takedown in the closing stages of the round.

The third was another close frame, both fighters having their moments in the final five minutes, but Evans upped his work rate and started to find his range better, even though Kelly never stopped moving forward. In the end though, it was Kelly who pulled off another upset victory, making it four in a row for the inspiring 39-year-old.

Calvillo held her own while striking with Cooper in the early going, but when the bout hit the mat, that’s when the Team Alpha Male standout took over. Initially sinking in a tight anaconda choke, Calvillo lost the choke, but as Cooper pulled free, the Sacramento product took her foe’s back, and moments later, Cooper was forced to tap out to a rear naked choke. The end came at 3:19 of the opening frame.

Calvillo moves to 4-0 with the win; Michigan’s Cooper falls to 3-3.

In the main card opener, perennial heavyweight contender Alistair Overeem made it two for two over Mark Hunt, knocking out his foe in the third round.

Overeem submitted Hunt in the first round of their first bout in the DREAM promotion in 2008.

The first round was largely a tactical one, with the most damage being done when Hunt suffered a gash on his leg when Overeem checked a kick.

But in the second, the action heated up, Overeem surging into the lead with several hard shots to the body and head, but Hunt roaring back, rocking “The Reem” with a head shot that forced him to cover up. Overeem shook off the effects of the blow though, and as he bulled Hunt into the fence, he dominated as close quarters. Late in the second frame, an elbow by Hunt appeared to stun Overeem, but “The Super Samoan wasn’t able to capitalize.

Battling at a grueling pace against the fence in round three, it looked like the bout was going to head to the scorecards, at least until a crushing knee to the head sent Hunt crashing to the mat face first, with referee Marc Goddard immediately stepping in to stop the fight at 1:44 of the final round.