"I prepared for this. This is what I trained for, and this is
what I set out to do, so it’s not a big deal when it happens." - Buddy Roberts 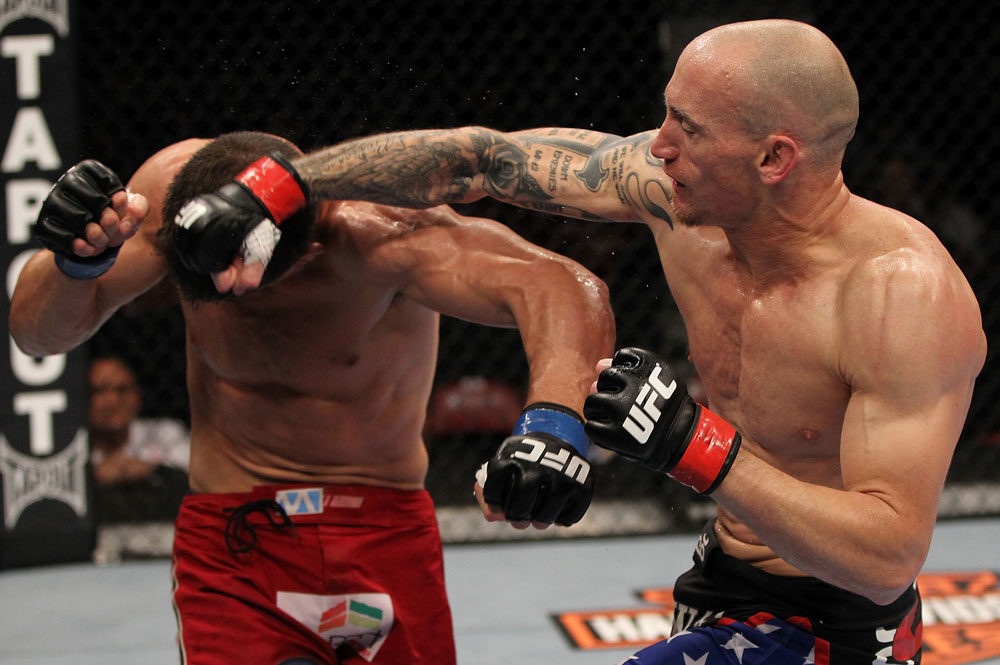 It was another rough day at the Jackson-Winkeljohn MMA gym in Albuquerque, New Mexico. In that gym, rough doesn’t mean that the treadmill wasn’t working or the juice bar is out of vitamin water. No, as middleweight Buddy Roberts describes it, a rough day in the ABQ goes something like this:

“I was looking out through the side of my headgear through the earhole,” said Roberts of an early sparring session with current interim UFC welterweight champ Carlos Condit. “You don’t know what’s coming, where it’s coming from. You don’t know if you just got hit with the feet or his hands.”

“And it’s been nothing but good for me. I hate losing. I’m a really competitive guy and I don’t like to lose, and I would leave and I would think about it, and it would bother me. I’d say I’m gonna do better next time.”

And he did. Currently 12-2 as a pro mixed martial artist, 1-0 in the UFC, and just days away from his main card debut on Saturday against perennial middleweight contender Yushin Okami, it’s safe to say that Roberts has come a long way from those looking through the earhole days.

But the 29-year old native of Fort Worth, Texas has always been tough. A defensive end for Howard Payne University, Roberts didn’t wait long to continue his athletic career once his four years of football were up. By the next January (2007) he had picked up his degree and was in California training with Ken Shamrock’s Lion’s Den back when the UFC Hall of Famer was known for putting his charges through the most rigorous tryout session in the sport. Roberts dodged that bullet, but admits that the tryouts were “like a normal week for us.”

By March of 2007 he was making his debut with a second round TKO of Andrew Montero, and he was on his way, determined to make his living as a fighter.

“My brother always worked,” he said. “I’d work and then take off early so I could go work out for football and stuff, and I’d rather work out for the rest of my life than have a regular job. So I was watching fights, I was a huge fight fan, huge Ultimate Fighter fan, and I was like ‘I think I can do that. I’d rather do that than go get a 9 to 5.’ So I gave it a shot, and so far it’s been working out.”

Roberts fought successfully on the local circuit, winning nine of his first 11 bouts. But it wasn’t until he made the move to New Mexico that things really started to click for him. And in that gym, if it doesn’t eventually click, it can be a painful and frustrating process.

“It’s been nothing but an advantage for me,” he said. “I come from a smaller gym (Reno’s Nevada MMA), so I was in a big fish / small pond type of situation. But being here, everyone’s big. And there are so many great guys here and so many champions – Carlos Condit, Jon Jones – and former champions like Andrei Arlovski, and they bring this aura in there. And we fight hard. So I’ve grown as a fighter, and when you spar with the best in the world and you do well with them, it will definitely build your confidence and make you start believing in yourself.”

After decision wins over Robert Turner and Tony Lopez in 2011, Roberts got his call to the UFC to face Sean Loeffler in February of this year. It should have been a good scrap, but Loeffler was forced to pull out of the fight with an injured ankle. On fight night. In the venue. It was a bizarre situation to say the least, but Roberts had remarkably been there before.

“I had so many fights fall through at the last second,” he said. “Once I was supposed to fight this guy, and we were in the back and he walked by my dressing room, and the next thing you hear is a bunch of people yelling. I put my head out, and, of course, the guy I’m supposed to fight got into a fight before the fight. And he really wasn’t injured or anything, but he said he couldn’t fight. So it has happened. It’s a little different from breaking your ankle though.”

Understandably disappointed, Roberts had to sit by and wait for another opening on the stacked schedule. On June 8th, he finally got his shot against Caio Magalhaes, and he delivered with an impressive three round unanimous decision win. A fight this weekend against hometown favorite Chris Camozzi was next on his ledger when Camozzi got injured. Luckily (or unluckily, depending on who you ask), fellow middleweight Rousimar Palhares also got injured, leaving Okami without a dance partner.

Next scene – Roberts is now fighting Okami, and he couldn’t be happier with the upgrade to the main card and the opportunity to see his stock rise considerably with a win over the former world title challenger. That’s the kind of fighter Buddy Roberts is. And he can thank the gridiron, Ken Shamrock, and some tough love from his coaches and teammates at Jackson-Winkeljohn MMA for that confidence.

“I prepared for this,” he said. “This is what I trained for, and this is what I set out to do, so it’s not a big deal when it happens. It’s just another day, another step toward my goals, and when it’s over I’ll assess the fight and move on from there.”