Terrance McKinney Is At It Again — To No One's Surprise — As The UFC Lightweight Up-And-Comer Fills In On Short Notice Against Drew Dober With Hopes Of Cracking The Top 15
By Thomas Gerbasi, on Twitter @TGerbasi • Mar. 10, 2022

Vacation? That’s not on the agenda for one Terrance McKinney, who makes a two-week turnaround from a February 26 win over Fares Ziam to face Drew Dober this Saturday in Las Vegas.

Is “T.Wrecks” bored or something?

“It's just what I love to do,” he laughs. “You gotta seize the moment. If you want to be great, you gotta do great things and I'm trying to be ranked and God blessed me with the opportunity to do it at an even quicker rate, so I had to jump on it.”

Approaching just his third UFC bout, the 27-year-old may not be exaggerating when he talks about getting to the lightweight Top 15 sooner rather than later. Yes, he’s been impressive in his first two outings against Matt Frevola and Ziam, but now he’s chasing Dober, a recent Top 15 contender himself, and even threw his name in the hat to replace Rafael Fiziev last week against former champ Rafael Dos Anjos.

“I tried to get that,” McKinney confirms. Did it ever get serious?

“I don't think so, but I put my name up there,” said the Spokane product, who mentions being there when opportunity called. I remind him that it’s more like he called opportunity up.

“I kinda manifested it. But it's just trusting in God, trusting in my coaches, and just confidence. I'm confident in what I'm blessed with, confident in my abilities, and I just know what I'm capable of. I'm in shape, I never stop training, so it was pointless to be in such good shape and not fight. I just love it, man, and I want all the smoke. T.Wrecks wants all the smoke.”

Of course, with such ambition and the willingness to back it up, what if he gets a short notice call to fight for the lightweight title? Is he in? 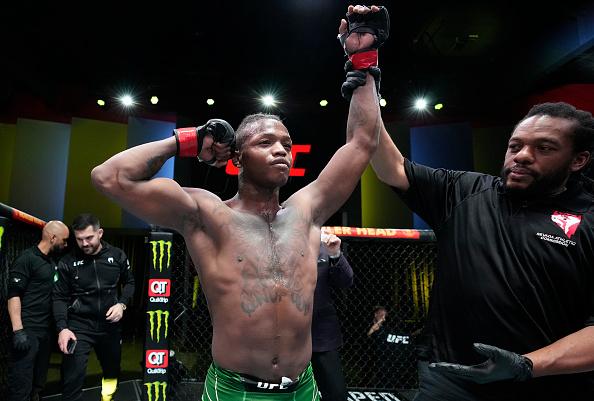 Terrance McKinney reacts after his submission victory over Fares Ziam of France in their lightweight fight during the UFC Fight Night event at UFC APEX on February 26, 2022 in Las Vegas, Nevada. (Photo by Chris Unger/Zuffa LLC)

Terrance McKinney reacts after his submission victory over Fares Ziam of France in their lightweight fight during the UFC Fight Night event at UFC APEX on February 26, 2022 in Las Vegas, Nevada. (Photo by Chris Unger/Zuffa LLC)

That’s confidence, but not cockiness, and there’s a difference. For proof, just check out McKinney’s social media feeds during the Ziam fight week, where he posted photos with the likes of Khabib Nurmagomedov, Bobby Green, Glover Teixeira, Corey Anderson and Joaquin Buckley, clearly showing respect for his peers as a fan while recognizing that there’s always something new to learn.

“You can always take something from someone, so I feel like it's important to stay a fan of the sport and not get prideful because these guys might have a slick little combo for me or some transition that I see that I like and I can implement in my game,” McKinney said. “Fighters should always stay humble in this sport because it's very humbling.”

Truer words have never been spoken, so it’s important for a fighter to keep his head and do things right not only inside the Octagon, but outside of it, as well. McKinney has got those lessons down pat.

“It's important because like I tell people, my training camp doesn't stop until I have the belt, and until that belt's in my hand, my job's not done, so I want to keep sharpening my tools,” he said. “I'll take a little bit off because it's important to let the body heal, but when you've got a dream and goal, it takes sacrifice, and like it says in the song, business before pleasure - that's just my motto.” 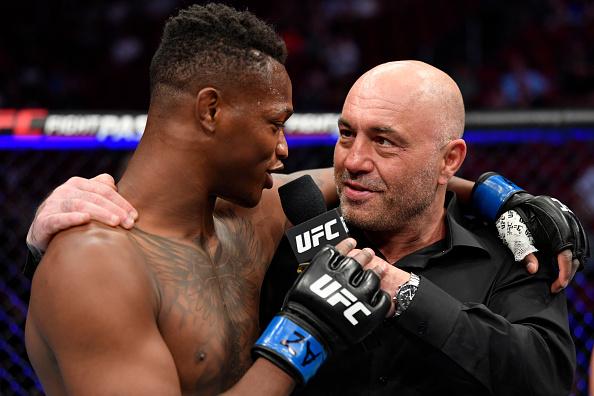 McKinney is having fun, though.

“I'm having too much fun,” he laughs. “This is like a video game - it never gets old, and every time I get a new opponent, it's more and more exciting because I'm actually playing the video game. I'm working my way up and taking the risky fights to get through as fast as I can.”