UFC fans, head to your nearest Wingstop now & pick up your UFC 30-pack before UFC191! Enter in-store for a guaranteed online PPV discount code and the chance to win a trip to UFC195! 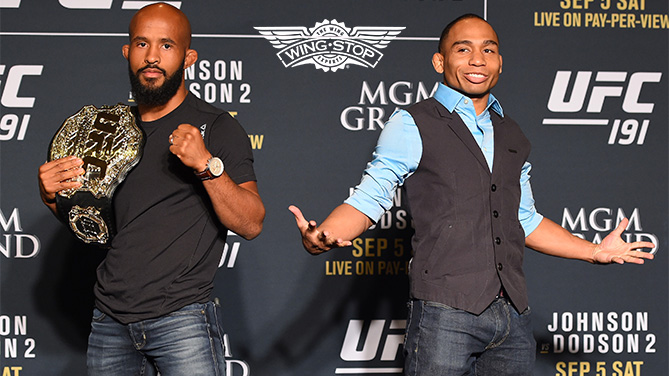 Whatever their differences, Demetrious Johnson and John Dodson will finally get down to business Saturday night at UFC 191. But first, there’s today’s weigh-in.

Thursday, after both fighters met their media obligations at the MGM Grand, they faced off on a stage with UFC president Dana White in front of several hundred fans. Judging by their matching scowls and refusal to shake hands, their dislike appears genuine.

They’ll get one more opportunity to exchange angry glances following the weigh-in at the MGM Grand Garden Arena. And then the talking will be over.

Without question, Dodson has amped up the rhetoric leading up to the fight for Johnson’s UFC flyweight title. Conversely, “Mighty Mouse,” who is attempting a seventh successful defense of his belt, has been quiet and mostly respectful.

Dodson became a father again earlier this week when his partner gave birth to his first daughter, but he’s been focused on trying to reverse a loss to Johnson in January 2013. It’s his only defeat in his past nine fights.

“I’m going in for the kill,” Dodson (18-6) told UFC.com. “I’m making sure I’m murdering him in the cage and bringing death to his title reign.”

That won’t be easy. Johnson has a 21-2-1 record and has never been beaten as a flyweight. He’s riding an eight-fight win streak.

A win on Saturday would tie him with Jose Aldo for the fourth-longest title defense in UFC history. Anderson Silva holds the record with 10.

There won’t be fireworks at today’s weigh-in, but the fight is another matter.