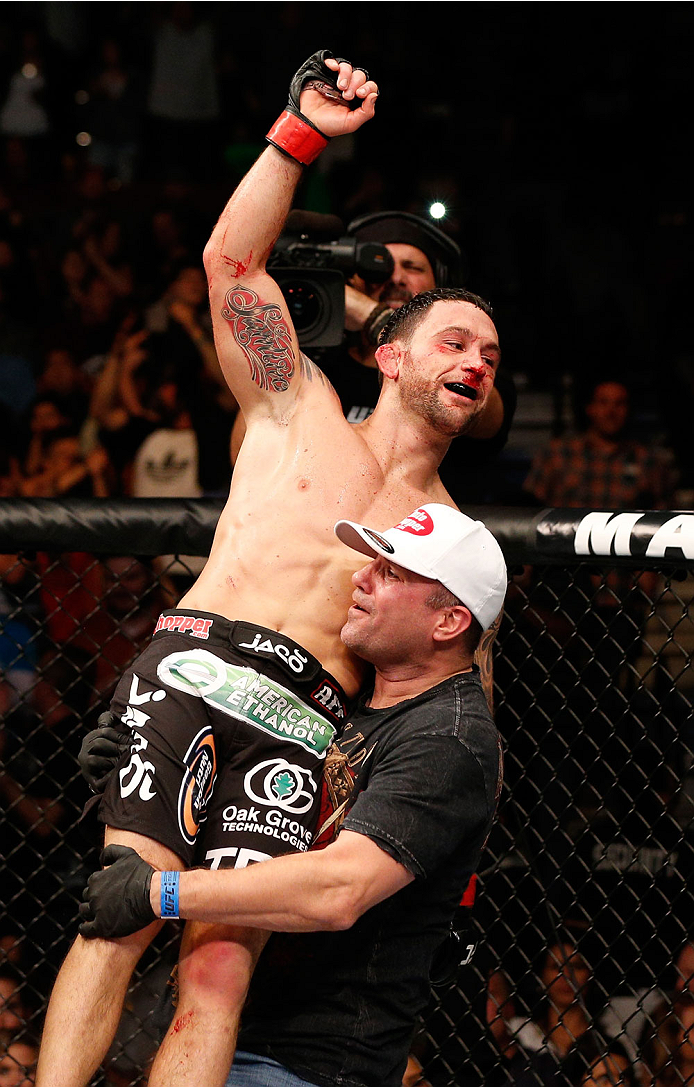 On May 16, Frankie Edgar headlines UFC Fight Night in Manila against fellow superstar Urijah Faber. It’s a SuperFight fans have wanted to see for years, and for good reason. In the case of Faber, it’s the idea of seeing one of the lighter weight pioneers trying to keep his remarkable unbeaten streak in non-title fights going. As far as watching Edgar goes, it seems like every fight is a super one when it comes to the pride of Toms River, New Jersey. Here are ten reasons why.

Tyson Griffin – February 3, 2007 - UFC 67 (Watch on UFC FIGHT PASS)
Result – Edgar W3
Just 5-0 as a pro when he got the call for his UFC debut against Tyson Griffin, Frankie Edgar was pretty much unknown out of the tri-state area, despite wins over Jim Miller and Deividas Taurosevicius. But 15 hard-fought minutes against Tyson Griffin later, Edgar’s name was on the lips of every diehard MMA fan, as he pounded out a unanimous decision in one of 2007’s best fights. Even more impressive than his overall performance that night was the heart he showed in gutting out a late kneebar attempt from Griffin.

“I hate to lose,” Edgar admitted. “I put so much on the line in that fight, it was balls to the wall the whole way, and then with 45 seconds left I get caught in that. But there was no way I could tap. It did pop a couple of times, but once it popped once, I said, ‘hey, the hell with it.’ I’d rather limp around for a while and get this ‘W’, then take a loss.”

Gray Maynard I – April 2, 2008 – UFC Fight Night (Watch on UFC FIGHT PASS)
Result – Maynard W3
When Gray Maynard rolled over Edgar en route to a clear cut unanimous decision victory in the high altitude of Colorado, many wondered whether Edgar was too small for the lightweight division, where his peers routinely cut huge amounts of weight while the New Jersey native barely had to cut any. Edgar wasn’t about to give up on his goal of becoming champion though, and that required reworking his techniques and game plans to deal with stronger 155-pounders. He would get a test of this new career strategy a year later…

Sean Sherk – May 23, 2009 – UFC 98 (Watch on UFC FIGHT PASS)
Result – Edgar W3
Despite being always willing to stand and scrap, Edgar’s bread and butter was still his Division I wrestling. But against a powerhouse wrestler like former lightweight champ Sean Sherk, Edgar would have to have a plan B, and on this night in May of 2009, not only did he have such a plan, but he executed it to perfection as he showed off a striking game that was a revelation to everyone outside of his inner circle. And with this new dimension to his game, he not only defeated Sherk, but he sent a message to the rest of the division that he was a legit contender and not going anywhere anytime soon.

“It’s just a natural progression of everything,” Edgar said. “By no means did it just come overnight. Every fight, even before I was in the UFC, I was willing to throw my hands, so I think I had that naturally on my side. But I think it was the Sherk fight, where I knew that a takedown wasn’t gonna come easy, so I knew I had to rely on my boxing. And that really gave me the confidence that I could do it at anytime.”

Matt Veach – December 5, 2009 – TUF 10 Finale (Watch on UFC FIGHT PASS)
Result - Edgar Wsub2
As an almost perennial underdog, Edgar would never have any problem getting up for fights against guys like Griffin, Maynard, or Sherk. But when an all-Jersey showdown against Kurt Pellegrino was scrapped due to injury, Edgar was thrust into one of those no-win situations when matched up with tough Midwest battler Matt Veach. Win, and he was supposed to win; lose, and it was off to the end of the line in the lightweight contender’s race. And while Edgar survived some dicey moments early on, he made some adjustments in the second round and hurt Veach before finishing him with a rear naked choke.

BJ Penn I – April 10, 2010 – UFC 112 (Watch on UFC FIGHT PASS)
Result – Edgar W5
Edgar, back in the underdog role, was given little chance of unseating Penn in their April 2010 championship bout, mainly because “The Prodigy” was fresh from two dominating finishes of Kenny Florian and Diego Sanchez. And Edgar knew that to win, it wasn’t going to be due to a flash knockout or submission, but by walking the tightrope of a perfect fight for 25 minutes.

“You can’t go into a fight with BJ Penn and say you’re gonna stop him because you’ll totally mess yourself up mentally,” he said. “So I went into that fight knowing that I’m gonna have to fight five hard rounds, stay active, and execute my gameplan.”

He did just that, using movement and quick striking to keep Penn off balance, and throwing in a couple quick takedowns for good measure. It was a career-defining performance when he needed it, and when the judges rendered their verdict, there was a new champion in town, and his name was Frankie Edgar.

BJ Penn II – August 28, 2010 – UFC 118 (Watch on UFC FIGHT PASS)
Result – Edgar W5
It was a fluke, they said. No way does Frankie Edgar beat BJ Penn a second time. But as is his custom, Edgar is taking an almost Randy Couture-esque pleasure in silencing the doubters, and at UFC 118, he nearly eliminated all of them by not only beating Penn as second time, but by shutting him out.

It was more of the same stellar striking, movement, and wrestling in their August 2010 rematch, but amped up to a new level that Penn just couldn’t cope with. It was a star-making turn for the Garden State’s newest sports star. Now he just had some unfinished business to tend to with an old rival.

Gray Maynard II – January 1, 2011 – UFC 125 (Watch on UFC FIGHT PASS)
Result – Draw 5
Looking to avenge the only loss of his pro career, Edgar had plenty of incentive when he defended his crown for the second time against Gray Maynard, but in the first round, it looked like his reign was coming to an end as he hit the deck multiple times thanks to the heavy hands of “The Bully.” But amazingly, Edgar not only survived the assault, he came back, won the second round, and continued to battle it out with Maynard through the remainder of the bout, arguably winning the fight. The judges ruled the bout a draw after five though, setting up a third bout between the two at UFC 136.

Gray Maynard III – October 8, 2011 – UFC 136 (Watch on UFC FIGHT PASS)
Result – Edgar KO 4
Shockingly enough, this was almost a replay of their second bout, as Maynard rocked and nearly stopped Edgar in the first round once more. Edgar, as is his custom, roared back again, but this time, he put a definitive end to their trilogy, knocking Maynard out in the fourth round to retain his lightweight title in another instant classic.

Jose Aldo – February 2, 2013 – UFC 156 (Watch on UFC FIGHT PASS)
Result – Aldo W5
After settling his business with Maynard, Edgar engaged in two five-rounders against Benson Henderson. “The Answer” lost both (and his title) but plenty of observers believed he did enough to win in each fight. Regardless, Edgar announced a move to featherweight after his rematch with “Smooth” and his first fight at 145 would be a big one against champion Jose Aldo. Again, Edgar lost a close decision, but in the process he pushed the Brazilian star to the brink and established himself as a legitimate threat in his new weight class.

Cub Swanson – November 22, 2014 – UFC Fight Night (Watch on UFC FIGHT PASS)
Result – Edgar Wsub5
Following the Aldo fight, Edgar won a Fight of the Night decision over Charles Oliveira and closed out another trilogy with a knockout – this time against BJ Penn – keeping him in the upper reaches of the 145-pound division title picture. But it was his win over Cub Swanson that had fans demanding an Aldo-Edgar rematch. Dominant from the start, Edgar ended Swanson’s six-fight winning streak with four seconds left in the fifth round, and now he’ll look for another huge win in Manila when he faces Faber.