The highly unofficial awards season continues with the top fights of 2013...Watch all 10 fights on Fight Pass! 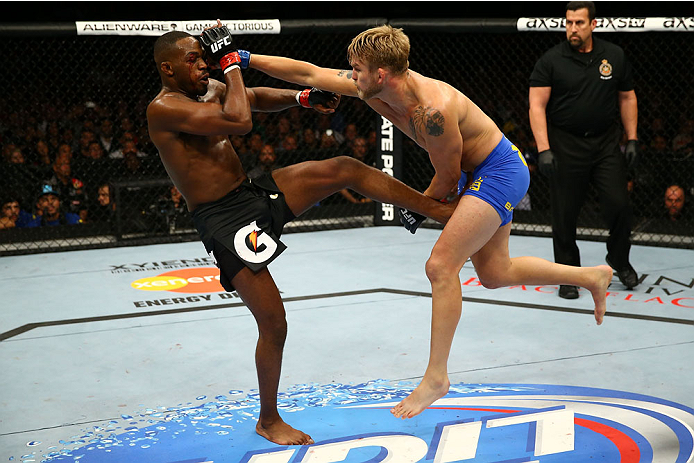 No elaborate introduction necessary here – read on for the highly unofficial list of the ten best fights of 2013. Let the debates begin…

10 - Georges St-Pierre vs. Johny Hendricks – UFC 167
The long-awaited championship showdown between welterweight champion Georges St-Pierre and number one contender Johny Hendricks in the main event of UFC 167 lived up to all expectations, with a fast-paced five rounder that saw both men showing off their skill and will in search of victory being the result. When it was over, the verdict was controversial, but Canada’s GSP retained his welterweight title via split decision. Watch on UFC Fight Pass

9 - Ronda Rousey vs. Miesha Tate II – UFC 168
With an electric atmosphere in the MGM Grand Garden Arena only adding to the compelling clash between rivals Ronda Rousey and Miesha Tate, the two bantamweight stalwarts went on to engage in a bout that had fans on the edge of their seat from the opening bell to Rousey’s third round submission finish. In between, Tate showed that Rousey was human, while champion Rowdy Ronda once again proved that she’s still the best in the women’s 135-pound weight class and a true superstar. This is a fight that lived up to the hype.

8 - Chris Weidman vs. Anderson Silva I – UFC 162
Despite facing a man who had shattered record after record, earning him accolades as the greatest fighter in mixed martial arts history, Chris Weidman just knew he could beat Anderson Silva. And in the main event of UFC 162 on July 6, the New Yorker did just that, making history as he knocked out the seemingly invincible Brazilian in the second round. Watch on UFC Fight Pass

7 - Demetrious Johnson-John Dodson – UFC on FOX
Against hard-hitting number one contender John Dodson, Demetrious Johnson’s first flyweight title defense became a battle for survival in the first two rounds of their UFC on FOX main event in January. But showing the heart of a champion, “Mighty Mouse” roared back in the final three frames to not only retain his title via unanimous decision, but also pick up Fight of the Night honors with his game challenger. Watch on UFC Fight Pass

6 - Dennis Bermudez vs. Matt Grice – UFC 157&nbsp;
The old mixed martial arts adage is that when you pit two quality wrestlers against each other in the Octagon, a standup brawl will ensue, and Dennis Bermudez and Matt Grice certainly did their part to prove that to be true, as they engaged in a fast-paced scrap that thrilled fans from start to finish. When it was over, Bermudez earned the decision win, but Grice lost no stature whatsoever in defeat. Watch on UFC Fight Pass

5 - Johny Hendricks vs. Carlos Condit – UFC 158
On any other card, the UFC 158 co-main event between Johny Hendricks and Carlos Condit at Bell Centre would have been a main event. Regardless, the two welterweight contenders fought like headliners, with Hendricks squeezing out a close, but unanimous, decision win in an instant classic that cemented Hendricks’ claim to the number one contender’s spot in the division and also secured Condit’s place as one of the most exciting fighters in the sport. Watch on UFC Fight Pass

4 - Gilbert Melendez vs. Diego Sanchez – UFC 166
With five Fight of the Night awards to his name, Diego Sanchez’ status among UFC fans as a true action hero was already cemented heading into his UFC 166 bout with Gilbert Melendez. But after former Strikeforce champ Melendez dominated the early going, Sanchez made sure he picked up his sixth FOTN award with a furious late rally that almost allowed him to snatch victory from the jaws of defeat before “El Nino” secured the three round decision win. Watch on UFC Fight Pass

3 - Mark Hunt vs. Antonio Silva – UFC Fight Night
No one expected December’s heavyweight clash between Mark Hunt and Antonio Silva to go five rounds. Most thought getting it into round two would be a stretch. But not only did these former training partners go the 25 minute distance, but they delivered an epic back and forth battle where the only fair verdict – a draw – should have been rendered. And it was, leaving no losers in Brisbane, Australia. Of course, Silva’s test after the bout for elevated testosterone levels put a damper on the post-fight euphoria from this battle, but the memories of the bout itself remain intact. Watch on UFC Fight Pass

2 - Wanderlei Silva vs. Brian Stann – UFC on FUEL TV
Most expected the bout between Wanderlei Silva and Brian Stann to be a standup battle, but no one could have forecast the intense slugfest that the two light heavyweights delivered for nine minutes and eight seconds until the legendary “Axe Murderer” emerged with a stirring knockout victory. Calling it epic would be an understatement.

1 - Jon Jones vs. Alexander Gustafsson – UFC 165
On the verge of setting a new light heavyweight record for successful title defenses, Jon “Bones” Jones’ performances in the Octagon made him appear to be unbeatable. But in Sweden’s Alexander Gustafsson, he may have found his great rival. For five rounds at UFC 165 in Toronto, the two battled it out on nearly even terms, with Jones in danger of losing his crown until a late surge allowed him to escape with a decision and his title, and prompt the call for a rematch from fans eager to see the two fight it out once more. Watch on UFC Fight Pass