The highly unofficial awards season concludes with the top fighters of 2013... 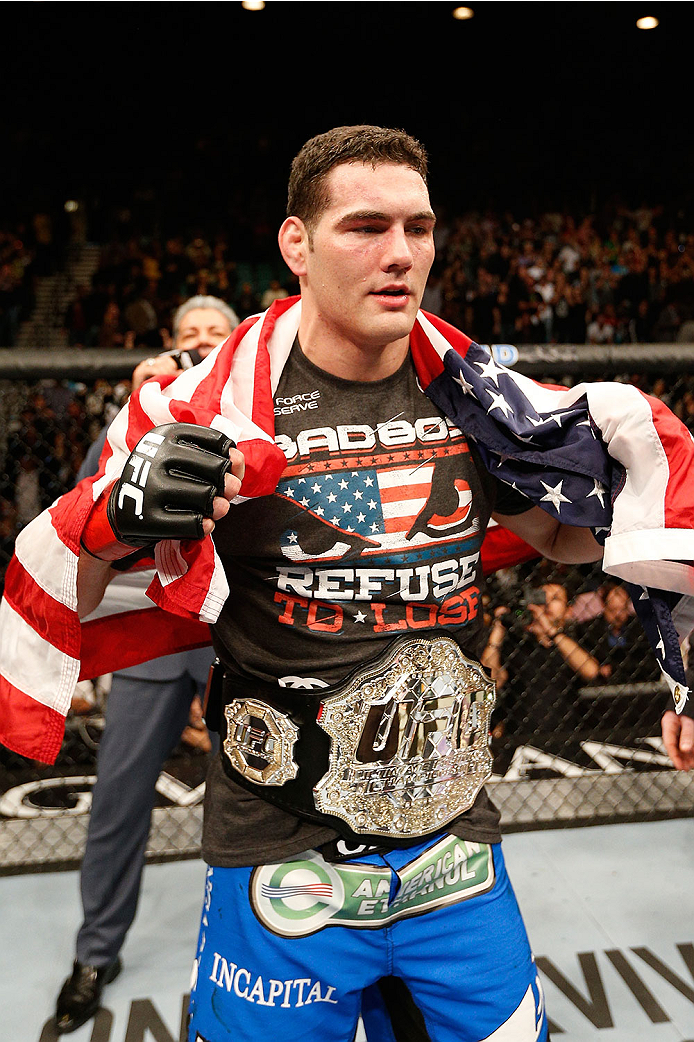 10 – Jon Jones
Ascending to the top of the pound-for-pound throne in 2013, light heavyweight boss Jon Jones had another big year with a first round romp over Chael Sonnen in April and a classic gut check win over Alexander Gustafsson in September which made it clear that even though Jones is human, he’s still the best in the game at the moment. - Watch on UFC Fight Pass

9 – Georges St-Pierre
Currently taking a break from the sport, a decision that prompted him to vacate his UFC welterweight title, Georges St-Pierre put two more big wins in the bank last year, winning a clear-cut decision over Nick Diaz in their long-awaited showdown and then having to dig deep to walk away with a controversial points win over Johny Hendricks in November.  - Watch on UFC Fight Pass

8 – Robbie Lawler
Diehard UFC fans were excited for the Octagon return of Robbie Lawler in 2013 after a long absence, but few would have expected to see him knock out Josh Koscheck and Bobby Voelker before wrapping up the year with a decision win over welterweight heir apparent Rory MacDonald. Now it’s “Ruthless” Robbie fighting for GSP’s vacant title against Johny Hendricks later this year. - Watch on UFC Fight Pass

7 – Cain Velasquez
One of the toughest titles to keep in one place over the years has been the UFC heavyweight crown, but after Cain Velasquez scored a quick TKO over Antonio “Bigfoot” Silva and won his rubber match against Junior Dos Santos in one-sided fashion while notching the first two successful defenses of his reign last year, it looks like the Californian may just stay on top for a while. - Watch on UFC Fight Pass

6 – Anthony Pettis
Currently sidelined by injury, Anthony “Showtime” Pettis left us with plenty to talk about from his 2013 campaign though, as he opened the year with a dominant first round Knockout of the Night win over Donald Cerrone in January and then annexed the UFC lightweight crown with a Submission of the Night victory over Benson Henderson in their August rematch. - Watch on UFC Fight Pass

5 – Travis Browne
Under the radar for much of his UFC career, Travis Browne remedied that in 2013, breaking into the top five with three impressive knockouts. Win over Gabriel Gonzaga, Alistair Overeem, and Josh Barnett - all of which won Knockout of the Night honors - have now made “Hapa” a serious threat in the heavyweight division. - Watch on UFC Fight Pass

4 – Urijah Faber
Entering 2013, some wondered if Urijah Faber still had what it took to command a third world title shot at 135 pounds. Here’s your answer: he does. Stepping up to the plate four times against quality opposition last year, “The California Kid” went four for four, decisioning Iuri Alcantara and submitting Ivan Menjivar, Scott Jorgensen, and Michael McDonald. So when Dominick Cruz went down with an injury and Renan Barao needed a dance partner for UFC 169 and a fight for the undisputed crown, Faber was the only logical choice. - Watch on UFC Fight Pass

3 – Vitor Belfort
Continuing his career resurgence at 36, Vitor Belfort earned himself a second middleweight title shot with his efforts in 2013, a year in which he picked up three straight Knockout of the Night awards with his decisive finishes of Michael Bisping, Luke Rockhold, and Dan Henderson. Next up, the man at the top of this list. - Watch on UFC Fight Pass

2 – Demetrious Johnson
With a come from behind decision win over John Dodson that earned him Fight of the Night honors, a last round tap out of John Moraga that secured a Submission of the Night check, and a Knockout of the Night victory over Joseph Benavidez, Demetrious Johnson did it all in defense of his UFC flyweight title in 2013, and while he probably would have earned Fighter of the Year honors in any other 12 month period, that highly unofficial award goes to… - Watch on UFC Fight Pass

1 – Chris Weidman
Anderson Silva showed no signs of slowing down heading into his two fights with Chris Weidman in 2013, but when the dust had settled, the greatest MMA fighter of all-time left those bouts with an 0-2 record. That’s enough to earn New York’s Weidman the Fighter of the Year award, but it was the way he won both bouts that secured this pick. Yes, Silva dropped his hands in the first fight, allowing Weidman to crack him and knock him out, and yes, it was a broken leg that ended the rematch, but before those endings, the new middleweight champion showed why he had earned such accolades from the fighting public in the first place. In the first bout, he nearly submitted Silva in the first round before taking advantage of the Brazilian’s hubris in the second round. In the rematch, Weidman controlled the first round before the end came in round two. In short, Weidman won both fights legitimately, and he takes the FOTY nod here as well. - Watch on UFC Fight Pass