On June 25, former UFC welterweight and lightweight champion BJ Penn returns to the Octagon to battle Dennis Siver in Oklahoma City. It’s the latest big fight for “The Prodigy” and one he hopes will join the fights below as a defining moment in his Hall of Fame career.

Caol Uno – November 2, 2001 – UFC 34
Result – Penn KO1 (Watch on UFC FIGHT PASS)
Penn burst on the UFC scene in May of 2001, when he made his pro debut with a first round stoppage of Joey Gilbert at UFC 31. After following that win up with a stoppage of legitimate contender Din Thomas in the first round at UFC 32, he was pitted against Japanese star Caol Uno in what was seen as yet another test. Penn - who admitted staying up nights with a nervous energy while waiting for the fight to come - tore out of his corner at the opening bell, and 11 seconds later, he was victorious after a vicious striking demonstration. What most may remember from the fight though is Penn sprinting out of the Octagon and back to his locker room after the fight, showing that there is no one in the fight game quite like him.

Matt Hughes I – January 31, 2004 – UFC 46
Result – Penn Wsub1 (Watch on UFC FIGHT PASS)
Penn returned four months after the Pulver fight and stopped Paul Creighton in two less than compelling rounds. He then won a close decision over Matt Serra in a bout some believed the New Yorker won, before fighting Uno again for the title Pulver vacated, this time with the two going to an unsatisfying five round draw. A win over Takanori Gomi in a non-UFC bout in Hawaii was a more positive result, but it wasn’t until his return at UFC 46 that people got a glimpse of the ‘real’ BJ Penn again, as he moved up 15 pounds to the welterweight division and shocked the world with a first round submission of the seemingly unbeatable Matt Hughes. Finally, BJ Penn was a champion…

Lyoto Machida – March 26, 2005 – K-1 Hero’s 1
Result – Machida W3
The new welterweight champ wouldn’t stick around long, and after a contract dispute, Penn left the UFC. Following his departure, he wasted little time getting back into action, as he submitted Duane Ludwig in the first round just four months after beating Hughes. What followed was a somewhat bizarre three fight string that saw him moving up even further in weight to take on Rodrigo and Renzo Gracie and current UFC light heavyweight contender Lyoto Machida. Amazingly enough, Penn won two of the three bouts, only dropping a decision to Machida in a heavyweight bout in March of 2005. Penn heard the criticism of his decision to jump around weight wise, but for him, it was just another way of testing the philosophies of his first love, jiu-jitsu. “Jiu-jitsu was created where the small man can beat the big man, and I’ve been doing jiu-jitsu since I was 17 years old, and that has always stuck in my head throughout all the time and all the way until now,” said Penn. “It’s ingrained in me that I believe I have a chance. I know that something’s gonna happen, the guy’s gonna make a mistake and I’m gonna get that armlock or get that choke.” 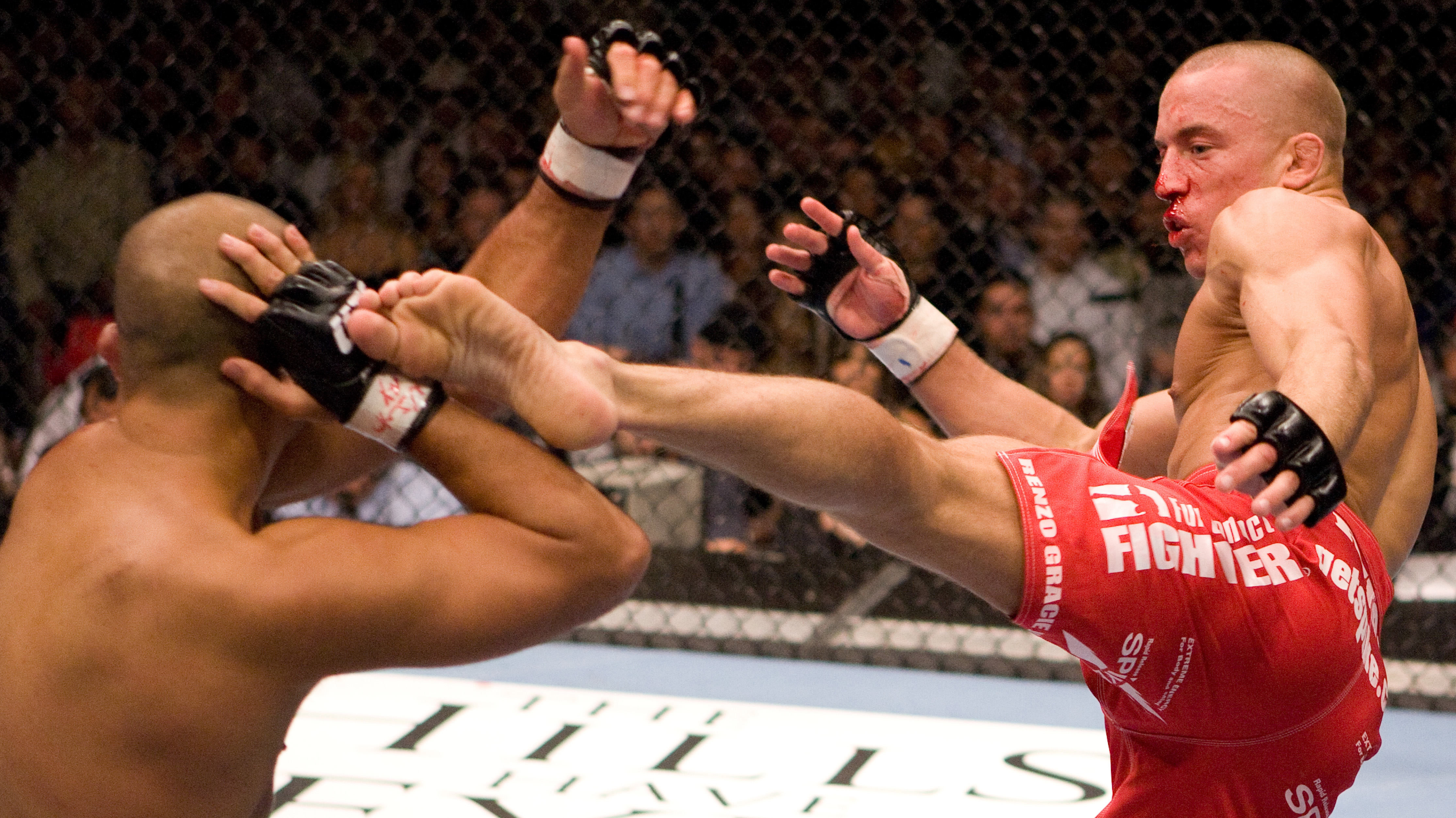 Georges St-Pierre I – March 4, 2006 – UFC 58
Result – St-Pierre W3 (Watch on UFC FIGHT PASS)
While Penn was gone from the UFC, Montreal’s Georges St-Pierre made his mark on the welterweight division and was zooming in towards a title shot. But Penn, quick to reclaim his territory in his first fight back in the Octagon in over two years, dominated the first round against St-Pierre, bloodying his foe and leading most to believe that the fight might soon be over. No one told GSP though, as he roared back and won the next two rounds on two judges’ scorecards, earning a three round split decision in the process.

Jens Pulver II – June 23, 2007 – The Ultimate Fighter 5 Finale
Result – Penn Wsub2 (Watch on UFC FIGHT PASS)
Penn had reached a crossroads in his career after the losses to St-Pierre and in his September 2006 rematch with Hughes - Re-dedicate himself or become an opponent. Penn decided to drop to 155 pounds again, and he set his sights on an old rival – Jens Pulver. “I was searching and wondering who I was in the fight game and then I went back and watched my first fight against Joey Gilbert and then I remembered who I was,” said Penn. “I was that guy, and then I started doing everything and getting back on top. It was wanting to fight Jens Pulver again that got me back on the horse.” Add in six weeks of competition as rival coaches on the fifth season of The Ultimate Fighter, and the rivalry hit a nice boil by the time Penn evened the score with a second round submission that revived his career.

Joe Stevenson – January 19, 2008 – UFC 80
Result – Penn Wsub2 (Watch on UFC FIGHT PASS)
It took him six years, but Penn finally won the UFC lightweight title when he submitted Joe Stevenson in the second round. It was a satisfying victory for him, and one that got him even more excited for the fights to come in the next few years. “Something just awoke inside of me where I said ‘what are you doing? You can beat every one of these people. You’ve been doing it half-assed all this time and it’s time to finally step up and let’s see it.’ If you can’t, you can’t, but at least you know you tried. Words can’t explain how pumped I am about fighting right now. It’s what I am, it’s who I am, and it’s what I want to be.”

Georges St-Pierre II – January 31, 2009 – UFC 94
Result – St-Pierre TKO4 (Watch on UFC FIGHT PASS)
After beating Stevenson for the title, the new 155-pound king was a new man. He tore through Sean Sherk in his first defense at UFC 84, and for Penn, the only logical next fight was a rematch with St-Pierre for the welterweight crown. It was the biggest superfight the UFC had seen in years, and anticipation was sky-high. The only problem was that St-Pierre was just too big and strong for Penn the second time around, and after four one-sided rounds, the Hawaiian’s corner had seen enough. 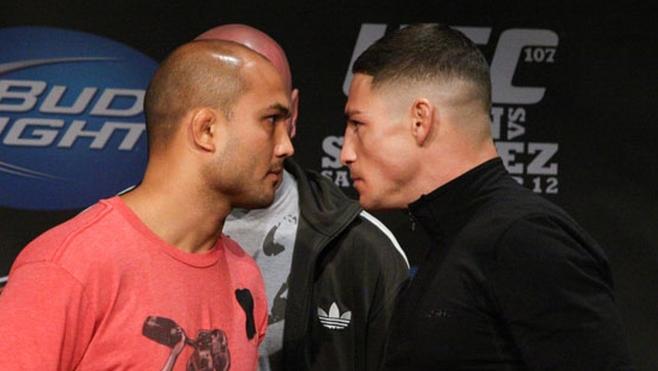 Diego Sanchez – December 12, 2009 – UFC 107
Result – Penn TKO5 (Watch on UFC FIGHT PASS)
The loss to GSP was a crusher for Penn, so everyone wondered how he would respond in his next bout back at 155, especially considering that Sanchez promised to take Penn into the late rounds and simply outwork him en route to taking the title. Penn, a little more low-key than usual leading up to the bout, took everything in and then unleashed it on fight night, putting on one of his best performances in dominating Sanchez before finishing him in the fifth round. Cardio? The Prodigy had plenty.

Matt Hughes III – November 20, 2010 – UFC 123
Result – Penn KO1 (Watch on UFC FIGHT PASS)
The win over Sanchez would be Penn’s last as lightweight champion, as he lost a razor-thin decision to Frankie Edgar at UFC 112 in April of 2010 and then a more lopsided verdict in their rematch in August of that year. Undeterred, Penn surprised many when he revealed that he was moving back to 170, and his first opponent at UFC 123 would be none other than his old nemesis Hughes. In the rubber match though, Penn took care of business quickly, knocking the Hall of Famer out in just 21 seconds. When it was over, it was shades of the first Uno fight, as Penn sprinted out of the Octagon before returning for the official announcements. As he said after the bout, “I’ve been trying to do a fight like the (first) Uno fight for the last nine years and it just never came out that way. So when this fight (with Hughes) ended up ending very quick with a knockout, I was pumped up, I started screaming in the ring for a little bit and I was like ‘here it is, here’s my chance. I’m gonna get out there and I’m gonna do it – Elvis is gonna leave the building.’”