Teixeira, Perez, Holloway, Lombard, Bahadurzada. Who was the top UFC newcomer of 2012? 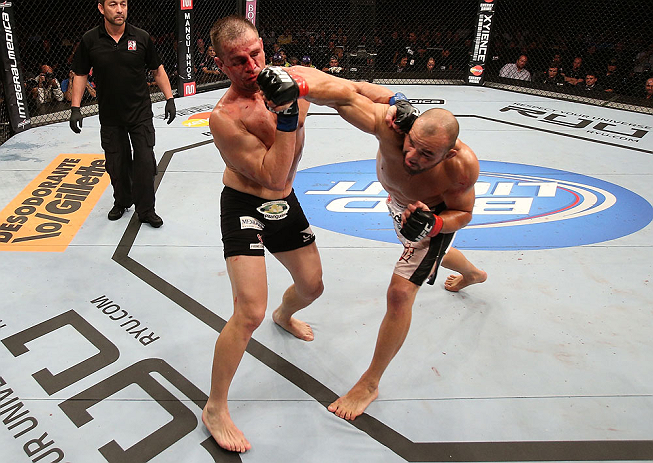 UFC 155 is in the books, and another year in the UFC has come to an end. So without further ado, the 2012 unofficial awards season begins with the best newcomers of the year.

10 - Rustam Khabilov
A late entry onto the list, Russian lightweight Rustam Khabilov made his name in the most emphatic of fashions at the TUF 16 finale on December 15th, suplexing Vinc Pichel into a first round knockout defeat and becoming an instant fan favorite in the process. It also didn’t hurt that his comment about the finish on Twitter read as follows: “My job is to throw him, how he lands is his business.”

9 – Ryan Jimmo
As you will undoubtedly tell by the entrants above and below number nine, I’ve given up on my rule of fighters needing to have more than one Octagon bout before being included here. Why? Performances like Ryan Jimmo’s seven second knockout of Anthony Perosh at UFC 149 in July. If that win didn’t whet your appetite to see more of the 31-year-old Canadian in 2013, then you’re watching the wrong sport.

8 – Gunnar Nelson
Long considered one of the best grapplers in the game today, Gunnar Nelson put his reputation and his unbeaten record on the line against DaMarques Johnson on September 29, and despite Johnson (Nelson’s third opponent for the bout) weighing in at 183 pounds for the welterweight bout, Nelson took care of business the way some people bring their car in for an oil change. Showing a remarkable level of cool and technical acumen, Nelson needed just 3:34 to submit Johnson with a rear naked choke.

7 – Myles Jury
For the last couple years, people knew of Myles Jury and his potential, but getting to see it was another thing, as he didn’t fight for two years as he battled back from a knee injury suffered on season 13 of The Ultimate Fighter and then got eliminated on season 15 of TUF by eventual finalist Al Iaquinta. But in 2012, Jury made his Octagon debut with a first round submission of Chris Saunders, and then scored a one-sided three round decision win over Michael Johnson that ended the hot streak of “The Menace.” 155, welcome a new name to the mix.

6 – John Moraga
A late replacement for Ian McCall in August, John Moraga seized his opportunity and ran with, knocking out highly touted Ulysses Gomez in the first round. Not satisfied, the former Arizona State University wrestler capped off a 5-0 year with a third round finish of Chris Cariaso that earned him Submission of the Night honors and a definite place in the flyweight title picture.

5 – Siyar Bahadurzada
With an amazing back story and the confidence that comes with using “The Great” as a nickname, Afghanistan native Siyar Bahadurzada was matched tough in his UFC debut against welterweight contender Paulo Thiago in April, but it apparently didn’t rattle the 28-year-old too much, as he delivered one of the biggest and most shocking knockouts of the year as he finished the Brazilian in just 42 seconds. The win was Bahadurzada’s seventh in a row, and while a July 21st bout with Chris Clements was scratched due to injury, anticipation is high for the return of Siyar The Great in 2013.

4 – Hector Lombard
After his signing in 2012, you would have expected Hector Lombard to be in the upper reaches of this list. After his dismal loss to Tim Boetsch in July, not so much. But one great performance can do wonders for your standing in the middleweight division, and Lombard’s blistering knockout of Rousimar Palhares in December was that kind of performance, quickly confirming the hype that surrounded Lombard for years, and making 2013 an interesting one for the former Olympian.

3 – Max Holloway
It almost seems like Max Holloway has been in the UFC longer than he has, but that’s what happens when you rack up four fights in your first calendar year in the Octagon. Starting off with a late notice loss to Dustin Poirier in February, the youngest fighter currently in the organization ran off three straight wins over Pat Schilling, Justin Lawrence, and Leonard Garcia, and while the 21-year-old’s UFC 155 victory over Garcia garnered some controversy, there’s no questioning the potential of the Hawaiian featherweight.

2 – Erik Perez
Entering the Octagon with a 10-4 record, I don’t know if anyone expected Erik Perez to have the year and impact he did in 2012. Starting with a submission win over John Albert in June, Perez then scored a UFC / WEC bantamweight record with a 17 second knockout of Ken Stone, and last Saturday he finished up the year with a TKO of Byron Bloodworth. In 2013, expect Perez to be tossed in with some of the big dogs at 135 pounds, and if last year was any indication, he should do just fine.

1 – Glover Teixeira
For years, fight fans heard of Glover Teixeira. But for just as long, it was almost like he was Sasquatch, a mythical creature that people thought they saw, but really didn’t. The 17-2 record and wins over the likes of Sokoudjou, Marcio Cruz, Marvin Eastman, Ricco Rodriguez, and Matt Horwich didn’t lie though, so after he straightened out some visa issues, he finally got his chance to compete in the UFC in 2012, and in less than two minutes in May he dismantled Kyle Kingsbury and announced his arrival with a resounding roar. So how good is he? His next fight was scheduled against former UFC light heavyweight champion Quinton “Rampage” Jackson at UFC 153 before Jackson pulled out due to injury. In stepped Fabio Maldonado, who took a one-sided thrashing from Teixeira in October before the fight was stopped after the second round. Next up for the 2012 UFC Newcomer of the Year? A rescheduled January 26 date with Rampage.