The 2012 unofficial awards season continues with the top fights of the year... 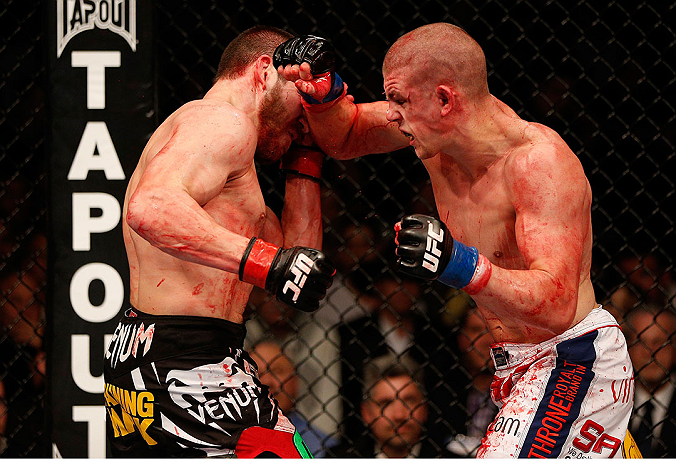 The unofficial UFC awards season is almost over, so enough yapping, you know what you’re here for – the best fights of 2012.

10 - Louis Gaudinot Wsub2 John Lineker – UFC on FOX 3
The green hair of Louis Gaudinot was flying everywhere on May 5th, and with good reason, as the former Ultimate Fighter competitor had just planted his feet and engaged in a series of furious standup exchanges with Brazilian debutant John Lineker. Representing not only himself in the UFC on FOX 3 show, but his home state of New Jersey and the fairly new UFC flyweight division, Gaudinot fought as if everything was on the line, and Lineker matched him step for step. The end result was a fight that made you demand more 125-pound action in the Octagon and one that showed the world that the winner by submission in the second round – Gaudinot – was not the same fighter at flyweight as he was at bantamweight. And that’s a good thing.

9 – James Te Huna W3 Joey Beltran – UFC on FUEL TV 4
As soft-spoken as James Te Huna and Joey Beltran are, they’ve proven that you don’t want to meet them in the Octagon on fight night. Plain and simple, they’re bruisers who are willing to walk through whatever they’re hit with in order to get their own licks in. And on July 11th they each bit down on their mouthpiece and went for broke, with a Fight of the Night brawl being the result. Beltran got rocked several times but just kept coming, and Te Huna, despite suffering fractures in his hand and foot, was able to pull out a gritty three round unanimous decision win.

8 – Anderson Silva TKO2 Chael Sonnen – UFC 148
For pure drama, the rematch between middleweight boss Anderson Silva and number one contender Chael Sonnen at UFC 148 in July is hard to top. The build up to the fight was epic, and as soon as Sonnen took Silva down seconds into the bout, the crowd at the MGM Grand Garden Arena erupted and the fans didn’t stop until the end came in the second round with Silva on top via TKO. Between those two moments, Sonnen dominated on the mat in the opening frame before Silva rebounded in the second like only he can. Nearly two years of anticipation preceded this championship match, and the end result lived up to the expectations.

7 – Demetrious Johnson W5 Joseph Benavidez – UFC 152
For the first flyweight championship fight in UFC history, there couldn’t have been a better bout than the September 22nd meeting between Demetrious Johnson and Joseph Benavidez. Featuring momentum changes, ultra fast-paced action, and high level mixed martial arts, these two 125-pounders reminded fight aficionados why they love the sport. In the end, it was Johnson scoring the minor upset by taking the split decision win over Benavidez, but you get the impression that these two will eventually meet again with UFC gold on the line.

6 – Jon Fitch W3 Erick Silva – UFC 153
Erick Silva was the hotshot from Brazil, the young gun expected to take his leap to the elite level of the welterweight division by beating one of the 170-pound weight class’ longest reigning contenders, Jon Fitch at UFC 153 in October. Fitch wasn’t going to go away that easily though; in fact, he wouldn’t go away at all, putting on one of his career best performances en route to a three round Fight of the Night decision win that saw him escape some precarious situations on the ground before emerging victorious. The lesson here? Don’t corner Jon Fitch; he’ll just fight harder.

5 – Georges St-Pierre W5 Carlos Condit – UFC 154
Many observers wondered what effect a nearly 19 month layoff would do to welterweight champion Georges St-Pierre, especially considering that the time off was to rehab a torn ACL. They didn’t need to worry, as St-Pierre was in prime form in November against interim champion Carlos Condit. And while the final scores of 50-45 (twice) and 49-46 would make you think it was a one-sided bout, Condit was competitive and dangerous throughout, especially when he dropped GSP with a head kick in the third round. This was top level championship action, and no fan left Montreal’s Bell Centre disappointed.

4 – Benson Henderson W5 Frankie Edgar I – UFC 144
Two of the game’s good guys met up in the UFC 144 main event in Japan in February, but Benson Henderson and Frankie Edgar fought like bitter enemies for 25 minutes, with Henderson taking a five round unanimous decision and the UFC lightweight title when it was all over. It was a bout that showed off all the best parts of this sport, not just the technical aspects, but the things you can’t really quantify on paper like heart and determination. As usual, Edgar had to bounce back from adversity early, cementing his reputation as one of the sport’s premier action heroes, but Henderson kept his cool throughout, picking his spots at times and then erupting with a burst of energy when he needed to. It was just a fun, closely contested fight to watch, and the UFC 150 rematch was just as much of a nailbiter.

3 – Eddie Yagin W3 Mark Hominick – UFC 145
After Mark Hominick fought for the featherweight title against Jose Aldo in 2011 and then engaged in a high-profile bout with “The Korean Zombie,” Chan Sung Jung, a lot of people were surprised when he was matched up with relatively unknown Eddie Yagin at UFC 145 in April. But if some fans didn’t know the Hawaiian, Hominick sure did, saying before the fight, “Even though it’s a newcomer to the casual fan, I know him a lot better than a lot of guys that the casual fan may know. He’s got more of a track record, more experience, and more years in the game than a lot of the guys in our division combined.” So what happened on fight night shouldn’t have been much of a shock to “The Machine,” as a blood and sweat flying three round brawl ensued that easily took that card’s Fight of the Night award. Dropped hard by Yagin in rounds one and two, Hominick roared back each time, and despite a strong closing round, he was on the short end of a split decision verdict which guaranteed that fans would know who Eddie Yagin was from that point forward.

2 – Chan Sung Jung Wsub4 Dustin Poirier – UFC on FUEL TV 3
When the UFC instituted non-title five round main events last year, there was concern that perhaps some of the matchups wouldn’t live up to that lofty billing. The featherweight war between Chan Sung Jung and Dustin Poirier wasn’t one of those matchups, especially with both 145-pound contenders being aggressive finishers with high-level fight games. But could their UFC on FUEL TV bout on May 15th live up to expectations? It sure did, and then some, with “The Korean Zombie” continuing to show off his fighting evolution with a varied attack that had him in control early on. But by the third round, fatigue began to set in, and Poirier began to turn up the heat. By the time the fourth round began, the momentum had shifted, and it was “The Diamond” who looked on the verge of a stoppage win. But the Zombie lived up to his moniker, stunning Poirier with strikes before ending the bout with a D’arce choke at 1:07 of the fourth stanza. These were two featherweights delivering heavyweight action.

1 – Jim Miller W3 Joe Lauzon - UFC 155
By the end of the first round on December 29th, it looked like Jim Miller was going to possibly wrap up a Knockout of the Night award against Joe Lauzon. Showing off some of the best standup of his career, Miller opened up Lauzon’s face, and as crimson stained the canvas, most believed there was no way the bonus king from Massachusetts could possibly continue. But continue he did, and over the next two rounds, he and Miller engaged in a back and forth battle that didn’t just display top-notch technical skills but the things you can’t quantify on paper – heart, guts, desire, determination. Miller’s hand was rightfully raised at the end, but Lauzon was no loser here, and with his submission attempts and ability to fight through cuts that would have finished off lesser men, he may have gained even more fans.