Smooth, Bones, Mighty Mouse, or The Immortal? Who is the top fighter of 2012? 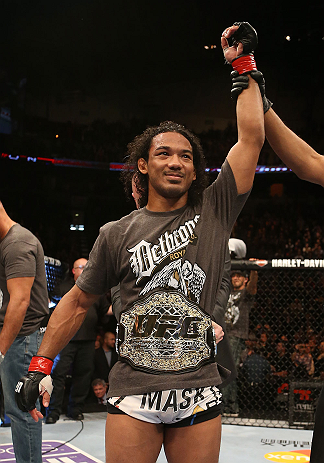 It’s the moment you’ve all been waiting for (hopefully), and here they are, UFC.com’s unofficial list of the top fighters of 2012…

10 – Costa Philippou
Talking to Cyprus-born middleweight Costa Philippou before his December win over Tim Boetsch, he admitted to not even knowing if he belonged among the elite 185-pounders before his late notice UFC debut in March of 2011. But since then, he has won five of six Octagon bouts, proving not only that he belongs, but that he’s a top ten contender. In 2012, Philippou went three for three, decisioning Court McGee and Riki Fukuda, and stopping Boetsch. Oh yeah, Costa Philippou is here to stay.

9 – Anderson Silva
The world’s best didn’t slow down at all in 2012, and as he approaches his 38th birthday in April, the end doesn’t even look to be on the horizon, an amazing feat in and of itself. In July, Silva finished off his rivalry with Chael Sonnen in emphatic fashion with a second round TKO win, and just three months later, he took a late notice main event in Brazil to save the UFC 153 card, and in his third UFC bout at light heavyweight, he made short work of Stephan Bonnar, leading to calls for 2013 Superfights with Jon Jones and Georges St-Pierre.

8 – Mike Pyle
I’ll admit it, I have a soft spot for veterans of this sport who have come up the hard way in the pre-TUF era and found a way to win consistently against the young guns in the sport. Names like Yves Edwards, Brian Ebersole, and Pat Healy immediately come to mind, and you can add Mike Pyle to that list as well. But what made the 2012 campaign of “Quicksand” so impressive was that despite his reputation as a submission specialist, the 37-year-old Pyle took out Ricardo Funch, Josh Neer, and James Head by knockout, showing that he’s not through surprising fight fans yet.

7 – Cub Swanson
One of the top featherweights in the world before this part of the planet got in tune with the 145-pounders, Cub Swanson’s luck always seemed to be on the other guy’s side. Not so in 2012, and after finally putting his bad luck and injury woes behind him, a new set of fans got to see just how good he really is, as he scored knockouts in each of his bouts against George Roop, Ross Pearson, and Charles Oliveira, picking up two Knockout of the Night awards in the process. It was an overdue reward for a fighter who has paid his dues.

6 – Stefan Struve
Checking in at seven feet tall, Stefan Struve was always physically imposing, but in 2012, his fight game began to match his natural gifts, and that made the “Skyscraper” even scarier. Still shy of his 25th birthday, Struve has learned to mesh talent, a desire to finish, and patience into an intriguing package that saw him halt Dave Herman, Lavar Johnson, and Stipe Miocic in successive bouts. And with two more post-fight bonuses added to a growing list of awards, Struve’s place is set as one of the heavyweight division’s most exciting competitors.

5 – Cain Velasquez
After losing his UFC heavyweight title to Junior dos Santos in November of 2011, Cain Velasquez entered 2012 with a host of question marks surrounding him. Yet by the end of the year, Velasquez not only answered the questions with a vicious stoppage of Antonio Silva and a one-sided five round win over dos Santos in their rematch, but he was back on top of the division with the heavyweight title belt back around his waist. In terms of 12 month turnarounds, you don’t get better than that.

4 – Matt Brown
Once on the verge of being cut from the UFC, Matt Brown is now on a four fight winning streak, with each fight coming in 2012. His level of activity, the way he won his fights (knockouts over Chris Cope, Luis Ramos, and Mike Swick, and a clear-cut decision over Stephen Thompson), and just the feel good nature of his comeback from some rough times in and out of the Octagon over the years unquestionably earns him the nod here.

3 – Demetrious Johnson
Ian McCall was considered by many to be the top flyweight in the world when the UFC launched the division in March. Former bantamweight title challenger Demetrious Johnson fought six rounds with McCall over two fights, drawing in the first one and clearly beating “Uncle Creepy” the second time. Then “Mighty Mouse” finished off his tournament run with an exciting five round win over Joseph Benavidez in September to cement his spot as the top 125 pounder in the world and to become the UFC’s first ever flyweight champion. Not a bad year at all.

2 – Jon Jones
Though he received a lot more press for things that happened outside the Octagon, everything from his new Nike deal and a DWI case to the cancellation of the UFC 151 event he was supposed to headline, UFC light heavyweight champion Jon Jones did what the elite fighters in the world do: when the pressure’s on, they perform. And “Bones” did just that, winning his heated grudge match over Rashad Evans in April and then surviving a tight armbar attempt in his September bout with Vitor Belfort to submit “The Phenom” in the fourth round. Next up for Jones is a stint as a coach on The Ultimate Fighter 17 against the man he will face in April, Chael Sonnen.

1 – Benson Henderson
Three championship fights. Three wins. 15 rounds of action. Doing that alone earns UFC lightweight champion Benson Henderson the top spot as Fighter of the Year for 2012, but in a year when injuries were a constant and crippling issue in the sport, Henderson also gets kudos for being one of MMA’s true iron men. Winning the title in February with a Fight of the Night win over Frankie Edgar, Henderson repeated the feat at UFC 150 in August, with both bouts being razor-thin nail biters. “Smooth” made sure that wasn’t the case in his 2012 finale against Nate Diaz on December 8th, as he dominated against the talented Stocktonite from start to finish. Henderson’s goal right now is to clean out the division and make a run at Anderson Silva’s all-time title defense record. Well, right now, Henderson looks like he just may have a shot at it.