The best submission finishes of 2011 are a click away... 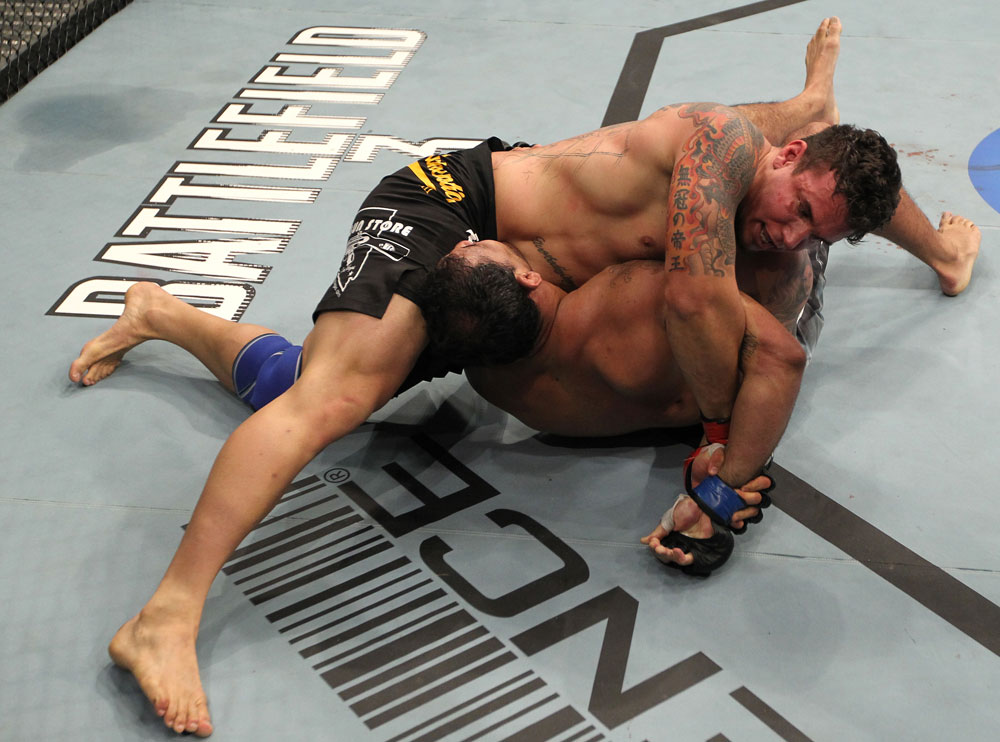 From vets making their last stand and young guns showing their stuff to a pitched battle for the top spot, 2011 saw more than its share of memorable submission wins. Here are five of the best of the best, at least unofficially.

10 - Chris Lytle over Dan Hardy
With three Submission of the Night awards in his UFC career, this spot is almost like a lifetime achievement award for Chris “Lights Out” Lytle, who announced his retirement from the sport after finishing Dan Hardy with a guillotine choke in their August bout. And though the final move won’t compare aesthetically to his triangle kimura of Jason Gilliam in 2007 or his kneebar of Brian Foster in 2010, he showed off in 14:16 what he was all about as a fighter, as he went toe-to-toe with “The Outlaw” and then put the finishing touches on the bout by coming out of nowhere with the guillotine. What a way to go out.

9 - Terry Etim over Edward Faaloloto
After 19 months out of action due to injury, lightweight Terry Etim’s biggest concern might have been ring rust when he entered the Octagon to face Edward Faaloloto at UFC 138 in November. Well, it still may be a concern because it took all of 17 seconds to end the Hawaiian’s night via guillotine choke. It was the Brit’s fourth Submission of the Night award, and if you didn’t know by now, you will be told again – don’t leave your neck exposed anywhere the long-limbed lad from Liverpool, because he will find a way to get it.

8 - Tito Ortiz over Ryan Bader
If you had to pick just one memorable moment from 2011, this may very well be it. Former UFC light heavyweight champion Tito Ortiz, winless in nearly five years, has a win or go home ultimatum staring him in the face heading into his July bout against Ryan Bader. So what did Ortiz do? He won, stunning Bader while standing, and then locking in a guillotine choke that ended the bout moments later. There are no words to describe the scene in Las Vegas that night as Ortiz sunk in the choke, with seconds seeming like hours before the tap came. If you’re looking for drama in sports, this was it.

7 - Jon Jones over Lyoto Machida
Though his flashy standup moves get all the attention, UFC light heavyweight champion Jon Jones is becoming quite the submission artist, and his 2011 campaign proves it, as his 4-0 record contains one knockout, two tap outs, and this December finish of Lyoto Machida, in which he caught the black belt in a standing guillotine after staggering him with a punch and then put him to sleep against the fence. Four wins, four finishes, three wins over current or former UFC champions. It was a year not likely to be touched by anyone anytime soon.

6 - Diego Brandao over Dennis Bermudez
Diego Brandao has a Brazilian Jiu-Jitsu black belt, but like Jose Aldo before him, it was almost like an urban myth, because all fans of The Ultimate Fighter’s 14th season saw was Brandao blasting out opponent after opponent with his fists en route to the season finale. But then Brandao got a taste of his own medicine from Dennis Bermudez and found himself on his back with his opponent looking to lower the boom. It could have been the signal for the bully to turtle up and go away, but instead, Brandao turned things around with his ground game, sinking in an armbar that finished the bout with nine seconds remaining in the opening round. Welcome to the UFC, Diego.

5 - Nate Diaz over Takanori Gomi
In his return to 155 pounds after a 2-2 run at welterweight, Nate Diaz looked like he was on his way to a Knockout of the Year nomination after lighting up former PRIDE champion Takanori Gomi on the feet for much of the first round in their UFC 135 bout. But then, as if bored of getting the best of the standup, Diaz went to the mat with Gomi, transitioned smoothly from a triangle to an armbar, and forced the Japanese star to tap out. If there was a more complete career performance from Diaz, I haven’t seen it.

4 - Joe Lauzon over Curt Warburton
A lot of fighters like to brag about their submission skills before a bout, saying “yeah, I’m gonna take his arm home with me.” Well, that doesn’t really happen now, does it? Joe Lauzon didn’t say such things before his June bout with Curt Warburton, but he almost pulled it off (pardon the pun) with a vicious kimura that followed a knockdown that you thought the New Englander was going to use to finish the fight with strikes. Instead, he yanked at Warburton’s arm and got the tap out with one of the most painful looking kimuras we’ve seen in a while. That Lauzon, he isn’t getting paid for overtime; he’s a finisher, and he proved it a second time in October when he ended Melvin Guillard’s winning streak via rear naked choke.

3 - Pablo Garza over Yves Jabouin
Note to anyone wanting to earn a spot on this unofficial list – pulling off anything with the word ‘flying’ in it is pretty much a guaranteed winner. Strangely enough, 2010’s KO of the Year list had Pablo Garza included for his highlight reel knockout of Fredson Paixao. So what were the odds of him topping that victory against Canada’s Yves Jabouin in April? Probably slim and none. That’s how devastating the Paixao finish was. So what did the North Dakota product do for an encore? Only a flying triangle that thrilled the over 55,000 fans in Toronto’s Rogers Centre and those watching at home. And while Garza didn’t initially finish the bout when the two hit the mat, he did so seconds later, garnering him an A for effort and for the eventual tap out by Jabouin at 4:31 of the first round. Remember, flying always wins.

2 - Chan Sung Jung over Leonard Garcia
Before Chan Sung Jung’s March rematch with Leonard Garcia, you might have assumed that the fight game of “The Korean Zombie” started and finished with his ability to brawl. Maybe Garcia, who defeated Jung in their classic 2010 bout, figured the same thing. He might have even thought that he was safe as the seconds wound down in round two in Louisville. But that’s when Jung struck with Eddie Bravo’s “Twister,” a painful maneuver that had never finished a fight in the UFC – well, up until Garcia’s tap out at 4:59 of the second round. It was a beautifully executed move, and a historic one that had the Unofficial 2011 UFC Submission of the Year locked up until December 10th…

1 - Frank Mir over Minotauro Nogueira
There is a small school of believers that think a knockout is more devastating than a submission. Frank Mir does not go to that school, and for years, I’ve thought of the two-time former heavyweight champion as someone who approaches subs the way a prime Mike Tyson approached knockouts. On December 10th, he proved it again, becoming the first man to submit former PRIDE / UFC champ Minotauro Nogueira. To do that while one hundred percent is impressive; to do it after getting buzzed and almost finished by one of the greatest heavyweights of all-time takes it to another level. There was a debate in my head about Mir’s kimura and Jung’s Twister battling it out, but in the end, Mir’s win will forever change the way those ‘KOs over Subs’ folks think about submissions, and that’s more than enough to earn the number one spot.