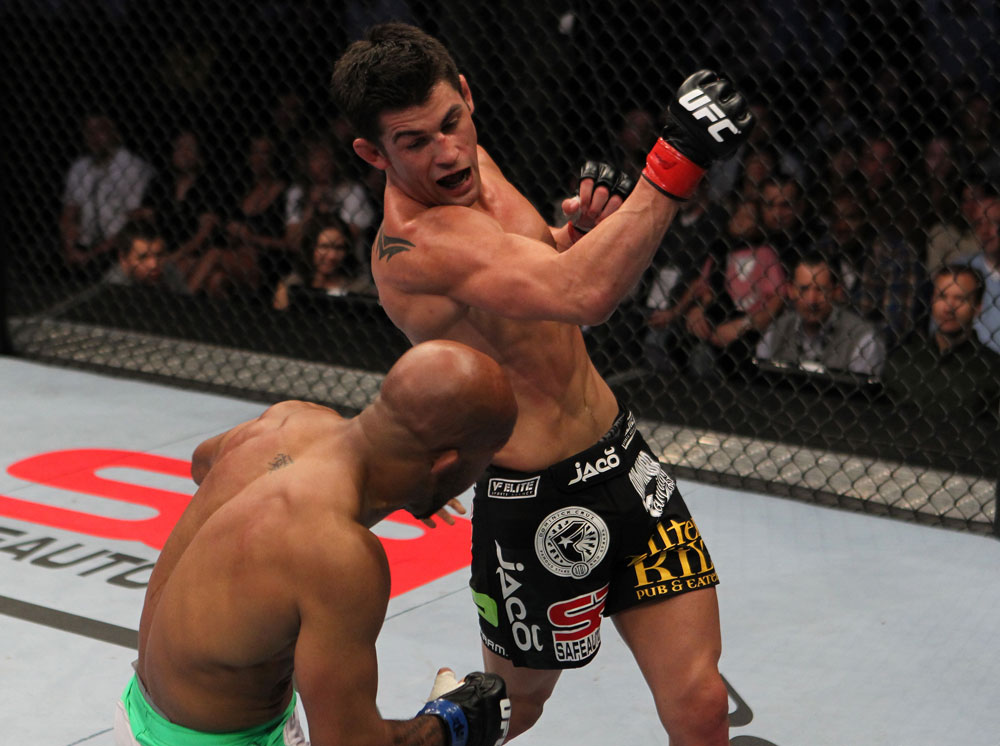 2011 was a pivotal year in the history of the UFC, as it was when fighters from the Zuffa-owned WEC, and later Strikeforce, organizations began cementing their place in the Octagon. So when it came time to put together the 2011 slate of awards, it was almost unfair to put true Octagon rookies in with those who came over to the UFC after fully-established careers in the WEC or Strikeforce. In response, for the first (and likely last) time, we’re instituting the unofficial Import of the Year award for those standouts who may have debuted in the UFC in 2011, but who had already begun building their championship level resumes in two other top level promotions.

10 (tie) – Danny Castillo
It was disappointing to hear boos greet Danny Castillo’s split decision win over Anthony Njokuani at UFC 141 last Saturday night, because if anyone deserved an ovation for his 2011 efforts, it’s “Last Call,” who stepped up to the plate four times, impressively defeating Joe Stevenson and Shamar Bailey and eking out a close one over Njokuani, with the only blemish being an August loss to Jacob Volkmann. So let this be an unofficial round of applause for Castillo, a fighter who has earned himself a nice little vacation.

10 (tie) – Alistair Overeem
It’s always a tough call putting in a fighter with just one UFC fight under his belt into these lists, but former Strikeforce, Dream, and K-1 champion earned his stripes in just two minutes and 26 seconds, as he blasted out former UFC champ Brock Lesnar in last Saturday’s UFC 141 main event. “The Reem,” besieged by a break with his management company and longtime gym, as well as his mother’s illness, put everything aside for one night and delivered on the sport’s biggest stage. In the process, he earned a shot at Junior dos Santos’ heavyweight crown, already making 2012 a year to look forward to.

9 – Chad Mendes
Unbeaten in a weight class where it’s difficult to get any win, let alone avoid a loss, Chad Mendes has been “Money” thus far in his career, using an unstoppable ground attack to sail to the top of the featherweight division. In 2011, he followed up his 4-0 stint in the WEC with victories over Michihiro Omigawa and Rani Yahya, and if he can keep his streak going by defeating Jose Aldo for the featherweight title on January 14th in the main event of UFC 142, he will become a frontrunner for 2012 Fighter of the Year honors.

8 – Michael McDonald
Currently the youngest fighter in the UFC, 20-year old Michael McDonald may eventually turn into the best 135-pounder in the organization if he keeps on the track he’s currently on. McDonald debuted in the Octagon in March with a Fight of the Night decision win over Edwin Figueroa that was notable for McDonald’s offensive variety and Figueroa’s resilience after nearly being finished numerous times during the bout. In May, McDonald won his second UFC bout, as he decisioned tough Chris Cariaso, and he finished up the year with a Knockout of the Night victory over Alex Soto in November. With his youthful energy, aggressive style, and well-rounded skills, his potential is almost limitless.

7 – Dustin Poirier
Anyone who watched Dustin Poirier’s final WEC fight, a 53 second blitz of Zack Micklewright in November of 2010, knew that the Louisiana kid was a certified blue chip prospect. But raise your hand if you thought that he would blow through fellow phenom Josh Grispi at UFC 125 in January. Thought so. But that’s just what he did, scoring a dominant three round decision win in a bout that was as one-sided as you can get without a knockout being scored. In June, “The Diamond” made it two in a row in the Octagon with a decision victory over highly-regarded Brit Jason Young, and he showed even more polish in a UFC on FOX submission of fellow prospect Pablo Garza. Expect big things from Poirier in 2012.

6 – Chan Sung Jung
After his classic 2010 brawl with Leonard Garcia and his subsequent knockout loss to George Roop, Chan Sung Jung promised to show more dimensions to his game in 2011. And did he ever, putting his all offense / no defense “Korean Zombie” style to the side but still bringing the fireworks, as he pulled off the first Twister submission in UFC history against Garcia in their March rematch and then knocking out Mark Hominick in just seven seconds in December. What can the “Zombie” do for an encore? We can’t wait to find out.

5 – Urijah Faber
Former WEC featherweight champion Urijah Faber’s bantamweight experiment continued to prove to be a successful one in 2011, as he sandwiched solid wins over Eddie Wineland and Brian Bowles with a razor-thin decision loss to Dominick Cruz in their July title fight. The action-packed bout has prompted a 2012 rubber match that will be preceded by a coaching assignment for both on season 15 of The Ultimate Fighter. It’s the perfect vehicle to not only build anticipation for their third bout, but to introduce the uninitiated to what top level bantamweights bring to the Octagon night in and not out.

4 – Donald Cerrone
Unlike baseball, numbers don’t often tell the story of a fighter’s performance in the Octagon. But when it comes to Donald Cerrone, all you need to look at to describe his 2011 UFC campaign is the fact that he fought five times, won four, and brought home four post-fight awards. And though he’ll probably point to his Fight of the Night win over Paul Kelly, KO of the Night over Charles Oliveira, and Submission of the Night over Dennis Siver as the highlights (and let’s not forget his decision win over Vagner Rocha), for fight fans, his year-ending loss to Nate Diaz in yet another Fight of the Night may be the indelible image of 2011’s final fight card.

3 – Benson Henderson
In December of 2010, it was expected that then-WEC lightweight champion Benson Henderson was going to beat Anthony Pettis in the final WEC event and then go on to a UFC title fight. It didn’t happen that way and after losing to Pettis, “Smooth” scored a workmanlike decision win over Mark Bocek in his Octagon debut at UFC 129. But then Henderson kicked into gear, and with back-to-back wins over Jim Miller and Clay Guida that captivated the fight world, he earned his 2012 title shot against UFC lightweight boss Frankie Edgar, and he did it the only way we expect things to be done by the Arizonan – in exciting fashion.

2 – Jose Aldo
Already a WEC champion at 145 pounds and a member of the mythical pound-for-pound club, Jose Aldo picked up where he left off in the UFC, scoring a hard-fought five round win over Mark Hominick at UFC 129 in April and then turning back the challenge of Kenny Florian at UFC 137 in October. That’s ten rounds of action against world-class opposition, and while he hasn’t been blasting out foes the way he did in the blue cage, he showed more facets of his game in both UFC bouts, making him an even more complex puzzle for challengers to figure out in 2012 and beyond.

1 – Dominick Cruz
If you look down at the list of top bantamweight contenders, UFC champion Dominick Cruz has defeated most of them, and in 2011, he introduced himself to UFC fans with two more stellar performances, evening the score with Urijah Faber in their July rematch and then turning back the challenge of talented Demetrious Johnson three months later. With his fellow Ultimate Fighter 15 coach Faber waiting in the wings for a third bout, and Brazil’s Renan Barao knocking on the door, Cruz is likely to have a busy 2012, but that’s the way “The Dominator” likes it.

ED NOTE - Fighters who have previously competed in the UFC before 2011, such as Nick Diaz, are not eligible for this award...