Read on for the unofficial list of the top UFC fighters of 2011... 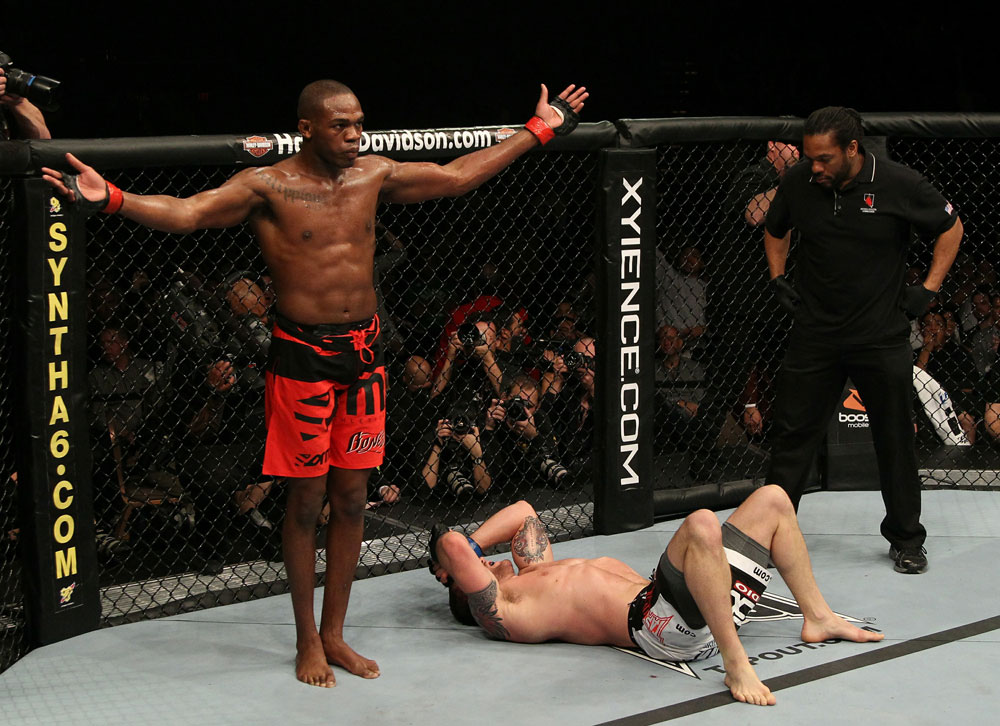 Picking the man at the top of the Fighter of the Year list was easy. The rest, not so much, as the past 12 months were filled with consistently stellar performances from some of MMA’s best. But enough yapping. Without further ado, here’s the unofficial list of the top UFC fighters of 2011.

10 - Dominick Cruz
Being the man tasked with leading the 135-pound weight class into the UFC was a pressure-filled position for former WEC boss Dominick Cruz, but “The Dominator” gladly took on the job and showed fight fans just what high-level bantamweight action was like, winning a Fight of the Year candidate against Urijah Faber in July, and then turning back the challenge of number one contender Demetrious Johnson in October.

9 – Donald Cerrone
The busiest man in the sport, Donald “Cowboy” Cerrone would have landed even higher on this list had he beaten Nate Diaz at UFC 141 last month, but even with that exciting Fight of the Night loss, there’s no downplaying of the year this lightweight contender had, as he turned back Paul Kelly, Vagner Rocha, Charles Oliveira, and Dennis Siver before the Diaz bout, picking up either a Sub, KO, or Fight of the Night bonus in three of those four wins.

8 – Mark Munoz
Middleweight standout Mark “The Filipino Wrecking Machine” Munoz lived up to his nickname in 2011, impressively stopping CB Dollaway and Chris Leben and pounding out a hard-fought decision win over Demian Maia to earn himself a title elimination bout later this month against Chael Sonnen. He’s come a long way since losing his debut at light heavyweight to Matt Hamill in 2009.

7 – Johny Hendricks
Johny Hendricks continued to develop his overall MMA game in 2011, and while opponents still fear his wrestling attack, it’s his punching power they should really be looking out for, as he sent TJ Waldburger and Jon Fitch to knockout defeats. In between, the newly christened “Bigg Rigg” gutted out a three round decision win over Mike Pierce, proving that whether the fights are 12 seconds or 15 minutes, he’s got the tools to win.

6 – (tie) Nick Diaz  and Dan Henderson
I never like to include fighters who fought just once in a calendar year on these lists, but I couldn’t resist when it came to Nick Diaz and Dan Henderson. Both came back to the UFC after fighting in the Strikeforce organization, where Diaz defeated Evangelista Santos and Paul Daley in 2011, and Hendo knocked out Rafael Cavalcante and Fedor Emelianeko before returning to the Octagon. Those four combined victories would have been enough for Fighter of the Year consideration if we included non-UFC wins here, but then both upped the ante, Diaz defeating BJ Penn at UFC 137 in October and Henderson winning the Fight of the Year over Mauricio “Shogun” Rua at UFC 139 in November. What more can you say about the year both men had? Welcome back.

5 – Benson Henderson
After losing his WEC lightweight title to Anthony Pettis on the organization’s final card in December of 2010, Benson Henderson was destined to make a low-key UFC debut in 2011, and he did, decisioning Mark Bocek at UFC 129. But then “Smooth” kicked into gear, ending Jim Miller’s long winning streak in August, and then winning one of the best fights of the year against Clay Guida. And while it took a year longer than originally expected, Henderson finally has his UFC title shot coming up against Frankie Edgar.

4 - Frankie Edgar
The
biggest hit to come out of New Jersey since Springsteen, Frankie Edgar
had to dig into the depths of his fighting heart to come back from a
horrific first round in both of his two five rounders against the only
man to beat him, Gray Maynard, but come back he did, drawing in the first bout at UFC 125 and
then knocking out Maynard and handing him his first loss at UFC 136. It
was stirring stuff, and when some compared him to the late Arturo Gatti
in terms of being able to pick himself up off the canvas to win, that’s
high praise.

3 - Anderson Silva
MMA’s pound for pound king kept on rolling in 2011, first making the front kick to the head the move du jour as he knocked out Vitor Belfort in February, and then going on to headline the UFC’s return to Brazil in August with a knockout of the last man to beat him, Yushin Okami. If the Silva is slowing down at all at 36, it’s certainly not showing on fight night, as his record shattering performances continue.

2 – Junior dos Santos
The latest star from Brazil, Junior dos Santos was in top form in both of his bouts in 2011, winning a lopsided three rounder over Shane Carwin in June and then capturing the UFC heavyweight title with a 64 second knockout of Cain Velasquez in November. But as spectacular as his performances were, his poise in going from contender to superstar was even more impressive. With his knockout power, poise, and improving overall game, his reign at the top may be the one to break all existing records.

1 – Jon Jones
Well, when you defeat an unbeaten prospect (Ryan Bader) and three current or former UFC champions (“Shogun” Rua, “Rampage” Jackson, Lyoto Machida), taking the 205-pound title in the process, not only did you have the best year of any fighter in 2011, but you’ve had one of the best years ever. And did I mention that Jon Jones also foiled a robbery on the day he won his UFC title in March? Oh yeah, this was the easiest call of any award this year. Jon “Bones” Jones is your 2011 Fighter of the Year.