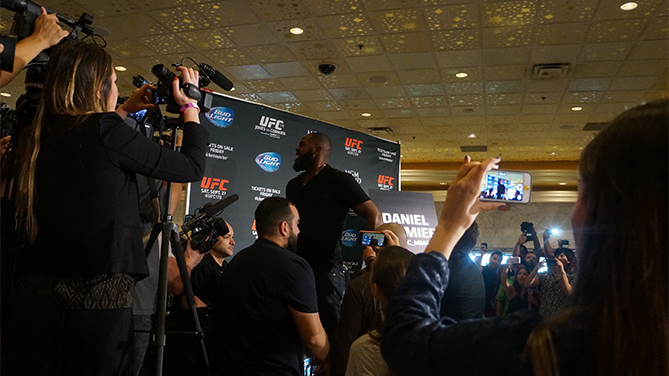 The UFC 178 main event between UFC light heavyweight champion Jon Jones and Daniel Cormier on September 27 is a little less than two months away, but the two combatants got started early at the MGM Grand in Las Vegas Monday afternoon, as the ritual faceoff after today’s pre-fight press conference turned into an impromptu brawl, with both Jones and Cormier toppling to the floor.

As Jones and Cormier squared off, a shoving match ensued, followed by punches and a grappling match with the two falling to the floor. Security and UFC officials broke up the dust-up, with Jones later tweeting “Come on DC where was your takedown defense” and later “I put you on your back in six seconds.”

Cormier’s response? “I got some td def for you. Don’t ever put ur dirty face on me again.”

The social media standoff didn't stop once cooler heads prevailed either, with Jones firing off with another volley of "Put some ice on that face DC, you got lots of interviews tomorrow," with Cormier responding "I won't let another man get in my face and put his forehead against mine. I will react every time. @JonnyBones next time I will slap you."