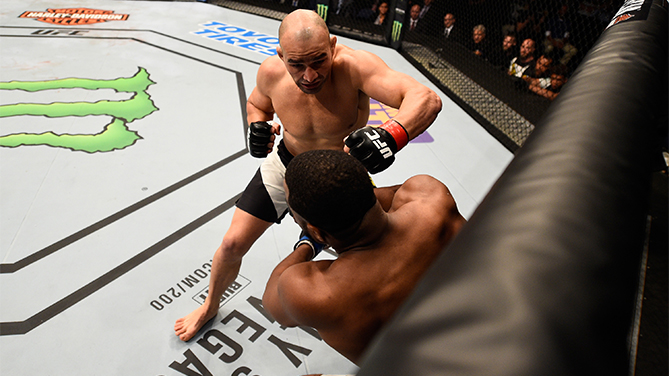 Six weeks ago, Glover Teixeira didn’t have a fight scheduled. By Saturday night, he was in the main event of the UFC Fight Night card at Tampa’s Amalie Arena and he scored the biggest win of his career, knocking out former UFC light heavyweight champion Rashad Evans in the first round.

The bout came together after Evans’ original opponent, Mauricio “Shogun” Rua, was forced from the fight due to injury. Teixeira stepped in on five weeks’ notice and made the most of the opportunity.

And that fighter came up big when it counted, sending the number seven-ranked Evans to his second straight defeat.

Evans (24-5-1) was looking to land his potent right hand in the early going, but he missed the mark. In response, he got into exchanges with Teixeira, hoping to catch the Brazilian napping. It didn’t happen though, and instead, it was Teixeria who landed with deadly intent. A left hook caught Evans flush and dropped him to the canvas, and as he attempted to get up, the New Yorker was hit with a right hand that put him down and out, referee Herb Dean stepping in at the 1:48 mark of round one.

The number four-ranked Teixeira moves to 25-4 with the win, and while number two-ranked Anthony Johnson is expected to wait for a shot at the light heavyweight crown, Teixeira had another option for “Rumble” that he suggested with a smile.