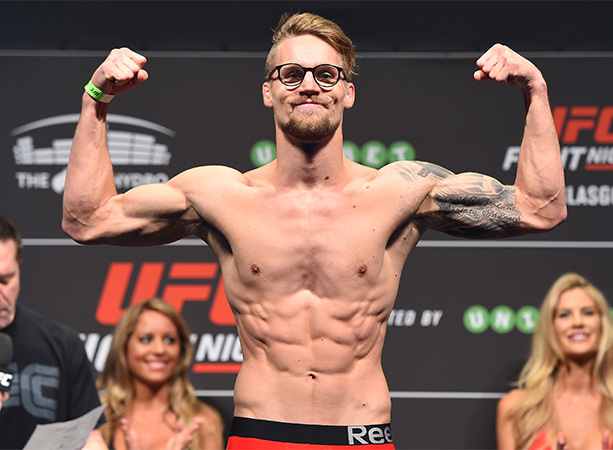 No one wants to have an opponent switch in the weeks leading up to the fight. That desire could have been doubled for Teemu Packalen as he found out on Feb. 16 that his pivotal lightweight bout against Lukasz Sajewski had turned into a bout against Thibault Gouti. Yet whoever is going to make the walk against the Turku native in London on Saturday, he will be ready to go as he looks for his first UFC win.

“It affected for me maybe two hours or so; after that my focus was normal again,” he said of the change from Sajewski to Gouti. “I'm really used to this. During my professional career there has been maybe one time when the opponent didn't change just before the fight. Luckily, the differences between these two opponents aren't too big, so in that way too, the change wasn't hard to handle.”

The 28-year-old Packalen doesn’t seem to be the type to get rattled by much. Some fighters in his position might feel the pressure to get the win after losing their debut, but Packalen wants the win to move forward and establish himself in the 155-pound weight class, not to save his roster spot. That fighting spirit is reflected in his pre-UFC career, where he picked up seven wins in seven fights, finishing all of them by knockout or submission. That’s not luck – that’s skill and attitude.

“MMA is about winning over your opponent in the cage,” he said. “Finishing them is the most dominant way to do that. I always want to win, and when you smell the blood you just have to take the risks. Of course it's also about tactics because in MMA anything can happen. During that last 30 seconds you can get submitted or KOed by an opponent you thought you were beating by points.”

That ability to finish and the desire to do so made Packalen a perfect candidate to compete on the UFC’s first show in Scotland last July, and when Jake Matthews was injured, he was selected to replace him in a bout against France’s Mickael Lebout. Yet despite a solid effort, Packalen suffered the first loss of his career via unanimous decision.

“I learned a lot,” he said. “Losing then sucked more than anything ever, but it also showed us some holes in my game. The short notice naturally had a major effect on my conditioning too, but I have to admit that I did make some technical and tactical mistakes also.”

Those holes in his game have been addressed in the lead-up to Fight Night London, and having a complete camp has helped as well as Packalen gets ready for UFC fight number two.

“The actual training camp wasn't too different, but now my resources are better, so it's easier to be more professional in every way,” he said. “My mental focus has improved now when the goal is set and certain.”

That goal is to win, and if he reaches it, that will be a big deal not just for him, but for Finland, which is starting to produce more and more UFC-caliber fighters. When Packalen first put on the gloves, getting to the Octagon wasn’t even a realistic goal, but now, it’s something all up and coming fighters from Finland can aspire to.

“The biggest difference is that among fighters, the UFC isn't just a distant dream anymore,” he said. “It's reality. When I started, there were no active UFC fighters in Finland, and back then if you told somebody that you wanted to fight in the UFC, they would have thought that you were either stupid or arrogant. Or both. Probably both. (Laughs) But nowadays, the Finnish audience also knows about the sport and the fighters and MMA is getting more popular and mainstream every day.”

And they most certainly know about Teemu Packalen, who says of his 2016 plans, “the fans can expect an always improving and winning Teemu.”