Tecia Torres Ready To Lay It On The Line

The strawweight veteran believes she knows how to shift the tide and do the little things neccessary for victory.
By Thomas Gerbasi, on Twitter @tgerbasi • Jun. 18, 2020

If Tecia Torres is playing the law of averages, it’s going to be a good night for her and her partner Raquel Pennington when they compete on the same card for third time on Saturday night in Las Vegas.

The first time around in 2012, the two future contenders first met in Kansas City before fighting on a stacked Invicta FC card where Torres defeated Kaiyana Rain and Pennington was submitted by Cat Zingano. Four years later, with both established on the UFC roster but still three months before they started dating, it was Pennington getting the win over Bethe Correia and Torres getting outpointed by Rose Namajunas.

This weekend, they fight on the same show for the first time as a couple and with those split results out of the way, Torres plans on beating Brianna Van Buren and expects Pennington to defeat Marion Reneau. And that would make it a heck of a nice plane ride home on Sunday to Colorado, where they’ve put in a short, but solid, training camp. 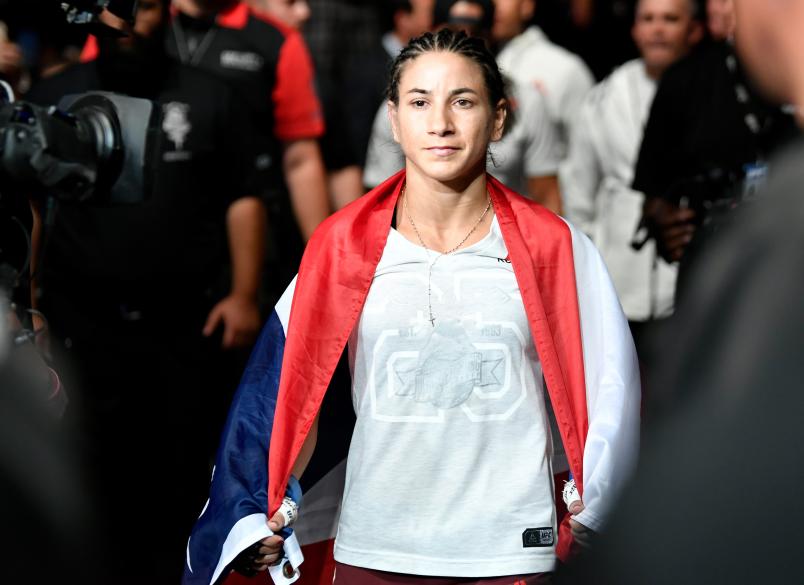 “It's been short, but it's been really good,” said Torres. “We've been doing a separate camp, but at the same time a together camp. I'll train with one coach and she'll train with another coach and then we switch off and then spar together and it's been working really well for this fight. I'm just happy I'm fighting first because I feel like I'm the more nerve-wracked one (Laughs), so I'll be able to get mine over with and then I can worry about her.”

Despite fighting on the prelim portion of the card, Torres-Van Buren will have plenty of eyes on it because A) it sounds like a monster movie pitting the “Tiny Tornado” against “The Bull," B) It’s practically a guaranteed action fight, and C) the 5-foot-1 Torres will be fighting someone shorter than her for the first time in MMA.

“I had one Muay Thai fight where I fought a girl who was her height,” said Torres of meeting the 4-foot-11 Van Buren. “So this is the first fight in MMA where I'm taller than the opponent, and it will be quite interesting to see that I have a little bit of a reach on her. It's cool just because of the dynamic. I think this will probably be the smallest fight ever in the UFC, since I'm 5-1 and she's 4-11. But I feel like smaller fighters do really well with getting in there with fighters who are compact and muscular, so I feel like it will be cool.”

At this point in her nearly eight-year pro career, you might assume that the 30-year-old would need any tidbit of motivation she can get after having been there and done that at 115 pounds. But there is still plenty of fire burning in the Massachusetts native, who is well aware that there are plenty of questions surrounding her after four consecutive defeats.

“I feel like every fight you want to go in and win and do your best, but I'm looking at it as we're both 0-0,” she said. “Anything can happen in a fight and I just want to go out and perform. I believe if I perform to the best of my abilities, I'm gonna come out with my hand raised. I feel like people underestimate people sometimes when you're coming off consecutive losses, but if you look at my record, the girls that I've lost to, four of the five are champions. And the way it went down with them, none of them beat the crap out of me.”

Truer words have never been spoken. Following her loss to Namajunas, one that evened the score between the two at 1-1, Torres won three straight before her current four-fight skid, where she lost competitive decisions to Jessica Andrade, Joanna Jedrzejczyk, Zhang Weili and Marina Rodriguez. Not a slouch in the group, and Torres believes she’s figured out what she needs to do to break open those close fights and be the one leaving with the win.

“I feel like it's little things where I didn't do enough in those fights or pushed enough to win,” she said. “But I'm ready to get back on the winning track and do my best and lay it all out on the line. I know if I go in there the way I've been performing in the gym, I'm gonna win.”

So no lingering ghosts of past losses swirling in her head?

“No, I don't talk about it,” she said. “The past is the past and I'm just staying focused on the next fight and I'm always excited about the next one.”

The next one is a day away. And as far as Tecia Torres is concerned, that’s when the comeback begins.

“There are struggles, and to get to success, you have to fail,” she said. “So I think climbing the ranks again would really be a tell-all for me, showing myself that I could have done it the whole time but I just needed to push a little bit more. I need to push and just be mean. Sometimes I'm too nice. (Laughs) I also need to believe in myself and I believe that I can become world champion one day.”