Tecia Torres Is Quietly Making Noise Among The Strawweights 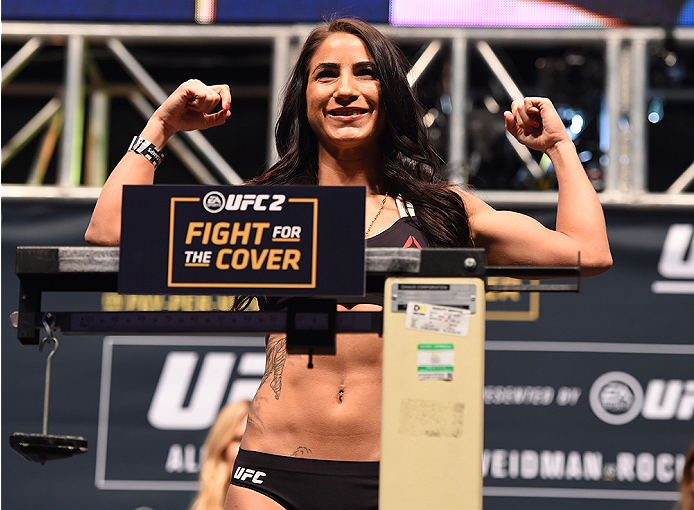 In a wide-open strawweight class, Tecia Torres should be making a lot more noise. She’s unbeaten as a professional, holds wins over the trio of Rose Namajunas, Paige VanZant and Felice Herrig, and she’s fighting on the biggest card of the year on Saturday against Jocelyn Jones-Lybarger.

So have people forgotten about “The Tiny Tornado” or has she forgotten to remind people about what she’s done?

“I'll go with I haven't reminded them of that,” she said with a laugh. “I still think that I need to showcase some more in my fights and do a little bit more damage, and that's why I think that maybe the longer approach is better for me. I’ll get a few more fights and a few more wins under my belt. There are a lot of interesting matchups that the UFC can make for me before a title shot can be spoken about.”

No one should be surprised by such a mindset, at least coming from anyone else. From Torres, who turned heads with her desire to run through the field on The Ultimate Fighter 20 and get the 115-pound title as soon as possible, it’s a remarkable switch from young lady in a hurry to a pillar of patience.

“I'm learning patience,” she said. “I see that there's so much talent within this division that I can't be in hurry like that because I'm gonna be quickly put on my butt. I think with every fight I'm learning and I need to take my time. When I go in there and I do get a title shot one day, and I do believe that will happen, I want to be one hundred percent physically and mentally ready.”

Entering the third fight of her UFC career, the American Top Team representative does have time, and like she said, there are more than enough quality matchups for her before she challenges champion Joanna Jedrzejczyk. One of those was against Michelle Waterson, but “The Karate Hottie” was forced out of Saturday’s bout due to injury. In stepped the talented but unheralded Jones-Lybarger.

“At first, getting the news that Waterson was out, I was pretty bummed and a little sad, to be honest, because I knew there were few options besides her at that point,” Torres said. “But I think that the switch up in opponents to Jocelyn worked out well. She's another striker, so I didn't really have to change much in that aspect of getting ready. The only thing different is she's taller, but I've fought plenty of opponents that are taller.”

And whether it’s Waterson or Jones-Lybarger, the aim for Torres remains unchanged. Make a statement to end 2015 and set up a big 2016.

“I definitely want to go out there and showcase my skills all around, show that I can be a striker and I can do some groundwork as well because it is such a great card to do that on and to get noticed,” Torres said. “So I think Jocelyn will be a good opponent to do that with, to exchange with and possibly do some ground work with if I choose to.”