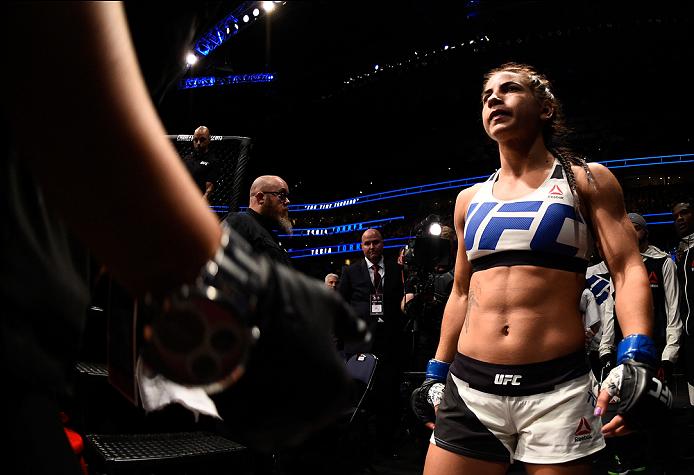 A key to success in anything is time management. That’s what the self-help books say, but when Tecia Torres says it, it carries a lot more weight, considering that a typical fight week for the “Tiny Tornado” doesn’t just involve cutting pounds and making last minute adjustments to her game plan, but homework as well.

“The time management is the hardest part, just trying to get all my reading in, all my essays and lectures, and then my training,” said Torres, who will graduate in May with a Masters degree in Criminology. “It’s most apparent when I have fight week, but outside of fight week, it’s okay. Once fight week comes, it’s so much to handle on my brain because my brain’s already going 10 million miles an hour trying to get ready for the fight.”

Yeah, your schedule ain’t got nothin’ on Torres.

Yet for the moment, with weigh-ins in the bank and a little more than 24 hours to go before her fight with Bec Rawlings, the 27-year-old can start to hone in on the task at hand, which is beating Rawlings and getting back into the win column.

Rebounding from a defeat is something Torres has never had to do, as her April loss to Rose Namajunas was the first of her professional career. But following the bout, there was no time to sulk, bury herself in a dark room or try to reinvent the wheel. Losses happen in this sport, and what was necessary was for Torres to figure out what went wrong, fix it, and move on.

“It’s part of the game,” she said. “You win some, you lose some. I just didn’t push enough and she was the better fighter that night. I think if we fought a third time we’d be just as competitive. So I just came out of that fight learning that I need to push it a little bit more, I need to want it more and I have to capitalize on the 15 minutes that I’m given. I didn’t do that, it was a close fight and she edged it out and came out victorious.”

Criminals beware, because that kind of succinct analysis will crack cases in a hurry once Torres moves on from the fight game. But that’s not coming anytime soon, as the No. 6-ranked contender still has business to tend to in the strawweight division, and she’s willing to take whatever road necessary to take care of it. It used to be that Torres was a young lady in a hurry, ready to get the belt yesterday. Then she opted for a more measured approach following her stint on season 20 of The Ultimate Fighter.

“Somewhere in the middle, probably,” she said. “I’d like to see it (a world title) one day, but who knows what’s gonna happen. I’m gonna be honest, I think I’m one of the top five strawweights out there, but it (the division) is just so talented that you never know what’s gonna happen. I’d like to say I go out there, get a win over Bec and then maybe a top five opponent, beat them and go for a title. That would be my ultimate goal, but we just have to see how it goes.”

That’s as humble an attitude as you will see in the world of MMA, and maybe that’s why Torres has been able to navigate rocky waters and still end up where she’s at right now. Or perhaps it’s just the realization that you don’t get to Step B without passing Step A, and Step A right now is Rawlings, who she defeated on TUF 20.

“I’m never gonna say I’m better than somebody,” Torres said. “I’m the best me. Do I think there are great fighters out there? Of course, there are lots of them. With Bec, I think she’s a pretty well-rounded fighter. Do I think her capabilities are as great as mine? No. But I think she’ll bring a competitive fight. We have history together, and it’s gonna be a fun one. I really do want that win so I’m hoping to go out there and be hungry for the win and just fight the entire 15 minutes and know that after those 15 minutes I can rest for however long I want.”