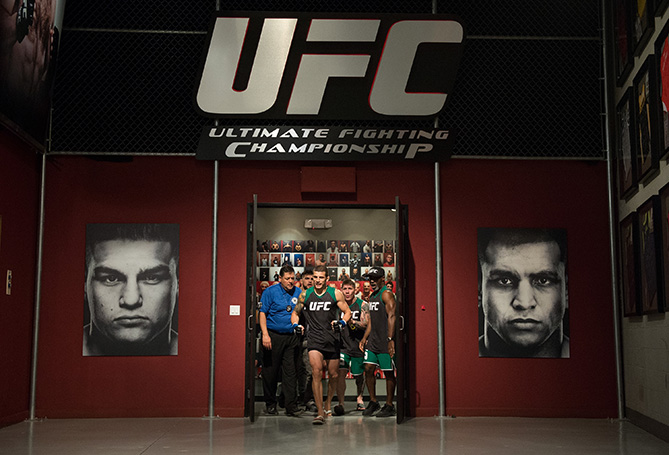 The newest season of The Ultimate Fighter: Latin America got underway this week with coaches Kelvin Gastelum and Efrain Escudero leading a team of welterweights and lightweights as they attempt to earn a contract in the UFC while surviving the toughest tournament in combat sports.

Unlike the first season from Latin America, the second go round won't feature region versus region, but instead, Gastelum and Escudero were able to evaluate all the fighters 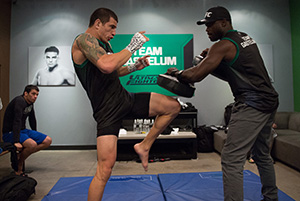 on the show and then select their eight-man teams for the competition this year.

Following a workout, sparring and grappling session, Gastelum and Escudero retire to the back to go through their selections with the rest of their coaching staffs to begin picking the teams. Since Escudero won the coin toss, he was allowed to decide whether he would get the first fighter or choose the first fight. This is always a tough choice because selecting the fighter a coach believes has the best chance to win the show right out of the gate is tempting but, then again, controlling who faces who in the initial matchup can set the tone for the entire tournament.

Escudero opts to make the first selection and he went with Kevin Medinilla, a 5-0 welterweight prospect out of Argentina. Gastelum opted for Cesar Arzamendia out of Paraguay and the choices went back and forth for 16 selections overall until all the welterweights and lightweights had been broken up into two teams.  The selections for this season break down like this: 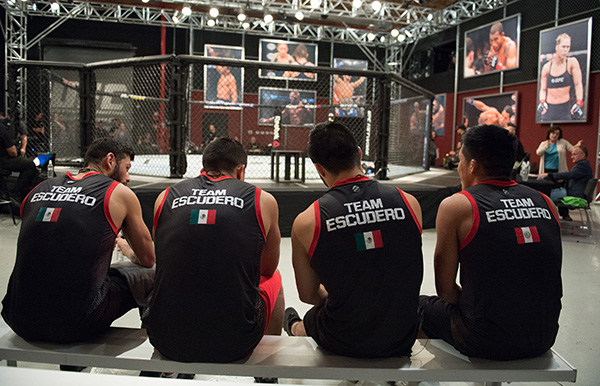 Once the teams are selected, Gastelum is allowed to make his selection for the first fight and he goes with his No. 1 pick at welterweight, Cesar Arzamendia, against the final pick for Team Escudero, Oliver Meza.

The fighters go from the gym to the house where they will live for the next six weeks while training to win the competition. For many of the athletes on the show, the house alone is worth the price of admission with all the bells and whistles they get to enjoy, although it's well known that the four walls start to look like bars in a jail cell after a few weeks with no contact with the outside world.

After everyone settles in, the fighters get a surprise when they travel to the first challenge of the season hosted by former Ultimate Fighter champion Forrest Griffin, who sets up the rules and the prizes for the competitors. The teams engage in relay race of sorts through various obstacles, with the winning team getting served a gourmet dinner while the losing team will be forced to play waiter to everyone on the other side if they don't come away victorious.

The race involves a log carry, a tire carry, a rope climb, a wall climb and finally a small obstacle course, all while exchanging the same jersey like a relay race baton. The first team to swing across on a rope to the final landing spot would win. Unfortunately, things didn't start out too well for Team Escudero after the very first jersey exchange slows them down, and Team Gastelum takes full advantage by taking the lead and never giving it up again.

The win was the first of the entire season, but Team Escudero had no plans of going down without a fight and they plan their payback when serving Team Gastelum the 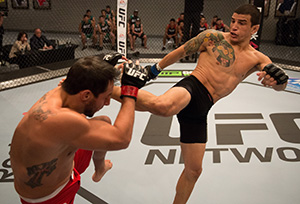 'special' dinner. Spicing the dinner with an assortment of peppers and even serving some of the opposing fighters the wrong food had everyone on Team Escudero laughing hysterically, but if there's one thing The Ultimate Fighter has taught us over 20-plus seasons, it’s that payback is coming.

Once the tomfoolery at the house is finished it's time to focus on the fight this week and we get a little background on Cesar Arzamendia and the tough situation he's been dealing with at home before coming to do The Ultimate Fighter. He explains to his new housemates how he hasn't seen his mother or three sisters in over two years after they moved away while he stayed in Paraguay with another of his sisters to live with his father. Arzamendia knows that after the show finishes, he needs to go to Argentina to see his family, and if things go well this year, he might be greeting them as an Ultimate Fighter champion.

The fight itself didn't last very long, with Arzamendia taking on Oliver Meza from Team Gastelum and simply overwhelming him with strikes early in the first round. Arzamendia was ultra aggressive with his attacks, going after Meza from the opening bell. It didn't help Meza much that he was stuck like a deer in headlights, barely moving and not offering any kind of counter to his opponent's offense. 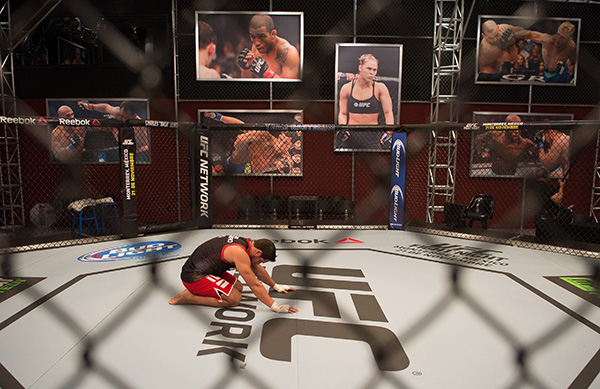 Finally, Arzamendia trapped Meza in a clinch where he began unloading a huge series of knee strikes and then a barrage of punches against the cage that forced the referee to stop the fight as Meza finally crumbled to the ground. Arzamendia looked impressive in victory while setting the tone to put Team Gastelum up 1-0 in the competition.

For the next fight, Gastelum remained in control as he shifted his focus over to the welterweight division with the first bout at 170 pounds set to kick off the next episode. Gastelum chose his No. 1 overall welterweight, Erick Montano, to face off with Team Escudero's Marco Olano.

Can Gastelum maintain control and knock off a welterweight in week two or will Escudero have time to get his guys prepared to steal the competition back in their favor in the upcoming fight? Tune into The Ultimate Fighter: Latin America 2 next Wednesday to find out.