"He's a bully, he pushes people back and that's something that I don't
want to do and I don't like taking a backwards step, so it's gonna be a
good fight for the fans." - James Te Huna 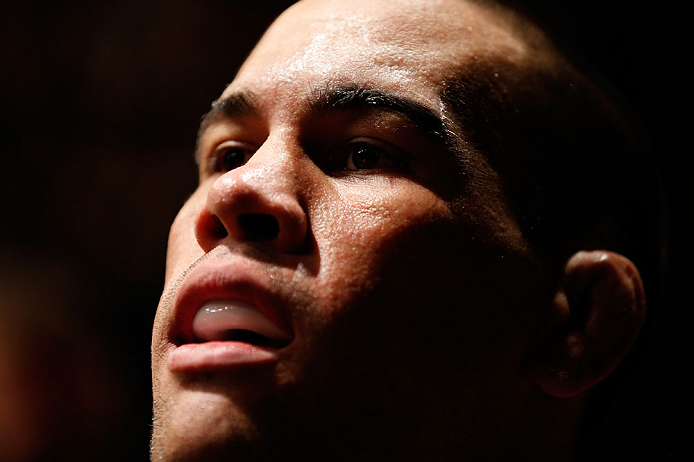 When James Te Huna and his entourage donned suits and performed a dance to the theme from Men in Black as an entrance for his last fight, it seemed to signal his growing confidence.

But in truth, the performance (which went viral with MMA fans) gave Te Huna a much needed distraction as he battled doubts heading into his bout with Ryan Jimmo.  Te Huna, who will fight Glover Teixeira on Saturday at UFC 160, was expecting to get knocked out. And it nearly happened after Jimmo dropped him with a head kick in the first round.

"In those last two weeks I knew what was going to happen (I would get knocked out); that's just how I was feeling, so I tried to relax coming into the fight by doing the entrance.  And that entrance did help, doing the Men in Black," said the 31-year-old Te Huna.  "But once I was in there I was expecting to get hit, and that's gonna happen if you think like that, but once I did get hit (with the high kick) I just went on autopilot and dug it out and got the win.  But my natural instinct wasn't there; I wasn't hungry for the fight. But this camp (for Teixeira) is just on a whole different level. I'm really excited for the fight, really pumped up. ”

After his initial onslaught, Canada’s Jimmo began to fade. By the third round, the New Zealand born Australian was in complete control on top of Jimmo, scoring heavy blows while taunting him.  Te Huna earned a unanimous decision win.  It was a remarkable comeback.

"He (Jimmo) had an injury, he was tiring out, he wasn't as hungry, and he didn't really want it in that second round.  He started to fold after that, I just stayed in a dominant position, and I was hungrier to win the fight after I got head kicked. (Laughs) Yeah, I tried to talk to him and create a conversation with him and just try and confuse him and it worked. I had some fun in there and got the win. That's all that matters."

Teixeira, fresh off a win over Quinton Jackson, is undoubtedly the biggest test of Te Huna’s career.  Ranked fourth in the UFC’s light heavyweight division, the dangerous Teixeira is 22-2 in MMA and has not lost a fight since 2005. He has 12 knockouts and five submissions to his name, but Te Huna sought out the challenge.

"I'd just come off a fight and I was going to go over (to Las Vegas) and watch (New Zealand born heavyweight) Mark Hunt against JDS and support him, but to find out I had the opportunity to fight on the card, I was over the moon.  Teixeira was looking for an opponent because (Ryan) Bader dropped out. And I was the first person to step up. I asked for it, I wanted it, so I'm up for the challenge and this is what got me into the sport in the first place: challenges. This is another one."

Teixeira has knockout power and is an accomplished black belt in Brazilian Jiu-Jitsu.  But Te Huna sees weaknesses.

"He is a very dangerous guy, probably one of the most dangerous guys in the light heavyweight division right now.  But I've seen some holes in his game and I think I can take advantage of those mistakes that he does."

Te Huna doesn’t plan on being bullied in the Octagon by Teixeira. Always in entertaining bouts, the fighter of Maori descent doesn't expect this one to be any different.

"He's pretty much a bully; that sums up the person that he is and the fighter that he is.  He's a bully, he pushes people back and that's something that I don't want to do and I don't like taking a backwards step, so it's gonna be a good fight for the fans.”

Te Huna’s core team of standup coach Lincoln Hudson, Brazilian Jiu-Jitsu coach Fabio Galeb and strength and conditioning guru Hayden Knowles remains the same.  But he has removed himself from the environment that created a lack of confidence leading up to his fight against Jimmo, continuing to seek out the best fighters in Australia from every discipline to train with, in the mold of welterweight champion Georges St-Pierre.  And his latest home-grown camp has raised the bar, as Te Huna brought in fellow UFC light heavyweight fighter and BJJ specialist Anthony Perosh and world boxing champion Danny Green to help him prepare.

"Yeah, I’m in a different environment, I got a different team of guys, I wake up every morning and I feel great.  Before I wasn't too keen on it. I was tired, I wasn't looking forward to the session and I knew I was gonna get beaten up each session.  But now each session gets better and better."

Te Huna hasn’t thought up another flamboyant entrance, although he won't rule out the possibility.

"As soon as I finished my last fight and got a real good response off that Men in Black, for a few weeks I was trying to think up another one for this (the next) entrance,” said Te Huna. “But as soon as I got the match I was just so focused for this fight that I didn't even start thinking about the entrance.  But I don’t know, maybe there will be. I might come up with an entrance in that last week, hopefully a surprise for the fans."

But this time, a focused and hungry Te Huna isn’t in need of distraction.