TAYLOR vs. LIMA
It took nine years, but Jesse Taylor got his redemption Friday night at T-Mobile Arena in Las Vegas, as he submitted Dhiego Lima in the second round to win season 25 of The Ultimate Fighter and a check for $290,000.

The victory came nearly a decade after a stint on season seven of the reality series that saw him lose out on fighting in the final due to outside the Octagon issues. But when he got his shot to make things right, “JT Money” did it, winning three bouts on TUF 25 en route to the matchup with Lima. 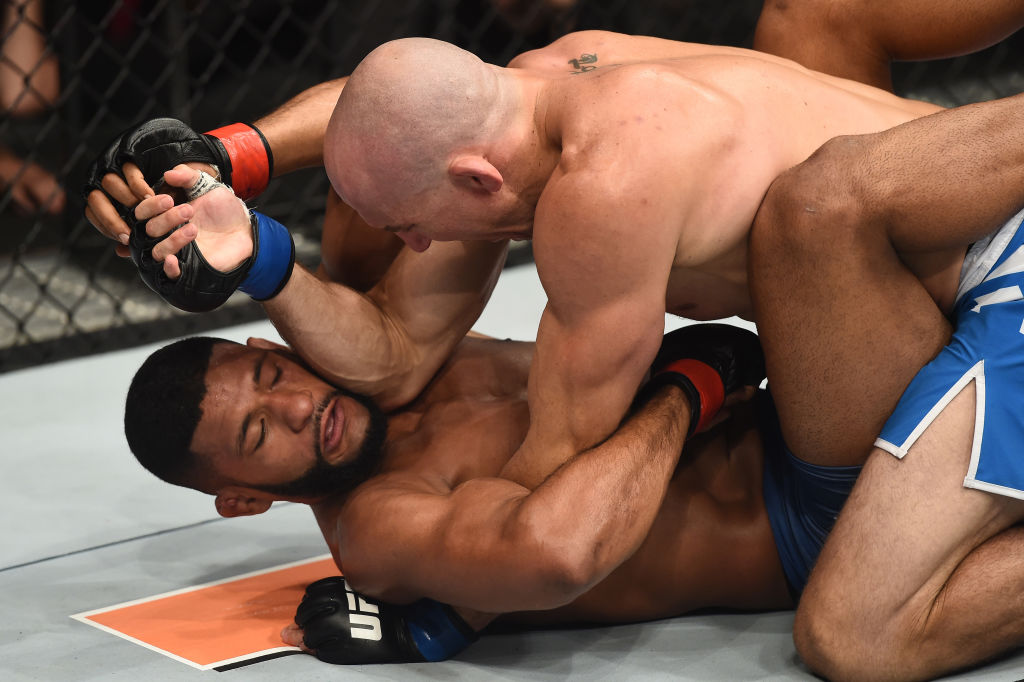 Not surprisingly, Taylor sought a takedown as soon as referee Jason Herzog waved the two fighters together, and it didn’t take long for him to get it. From there, Taylor swarmed on the mat, refusing to give Lima room to breathe. Taylor nearly sunk in two chokes, but when they came up empty, he was fine with ground and pounding his way through the rest of the frame.

A short left hand almost turned everything around for Lima, as he dropped Taylor seconds into the second stanza, but Taylor scrambled out of trouble, took Lima’s back and sunk in the rear naked choke that forced the Brazilian to tap out at :43 of round two. 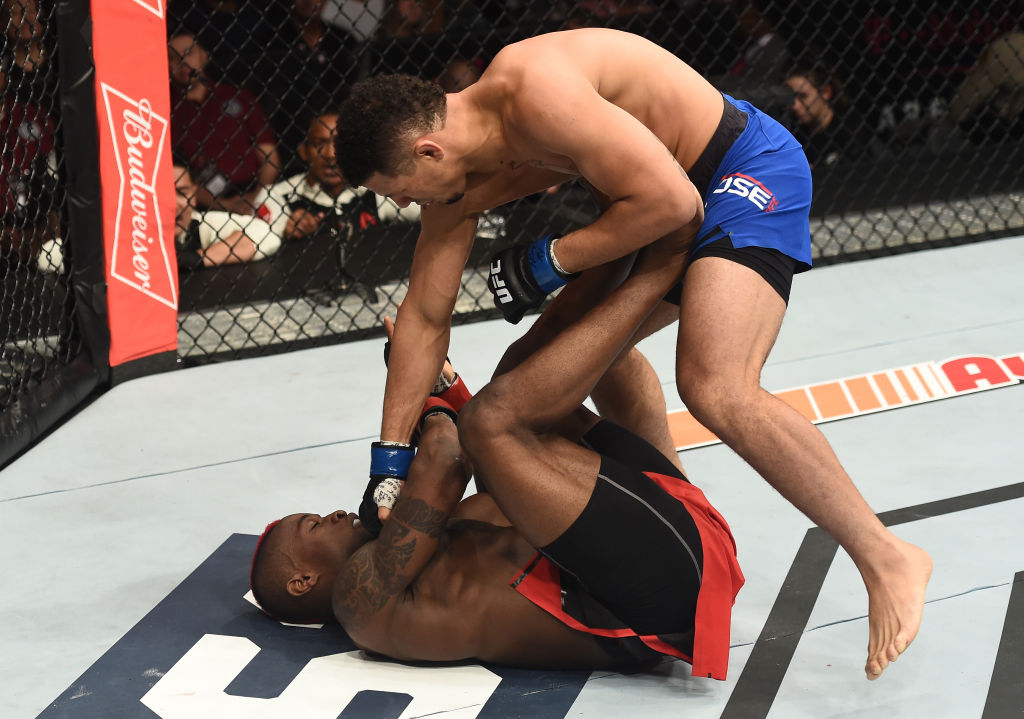 Unbeaten lightweights Drakkar Klose and Marc Diakiese took their bad blood rivalry to the Octagon, and while it didn’t seem like a score was settled, Klose did leave with bragging rights as he earned a three-round split decision victory.

A pair of leg kicks got Diakiese’s attention and a takedown kept him on the defensive in the opening stages of the fight. But after a spell in the clinch, Diakiese was able to throw Klose down a couple times and begin implementing his own ground attack. With less than two minutes left, the two broke and Diakiese began firing off kicks, but it was another leg kick by Klose that put the Brit on the deck, and Klose went to work from the top position. Diakiese scrambled out of trouble, though, and he wound up on top as the round ended.

Whether in the clinch, standing or on the mat, Klose (8-0-1) simply outworked Diakiese in round two, as he put his hard hat on and kept moving throughout the middle five minutes. And by the end of the round, it was clear that Diakiese’s left leg was continuing to give him trouble.

Showing a sense of urgency, Diakiese came out fast in the third round, and while his striking was what got the oohs and ahhs from the crowd, his grappling game was scoring more points. But points weren’t going to be enough, as the “Bonecrusher” needed a finish. And while he made a run at getting it, the clock ran out on Diakiese, who falls to 12-1. 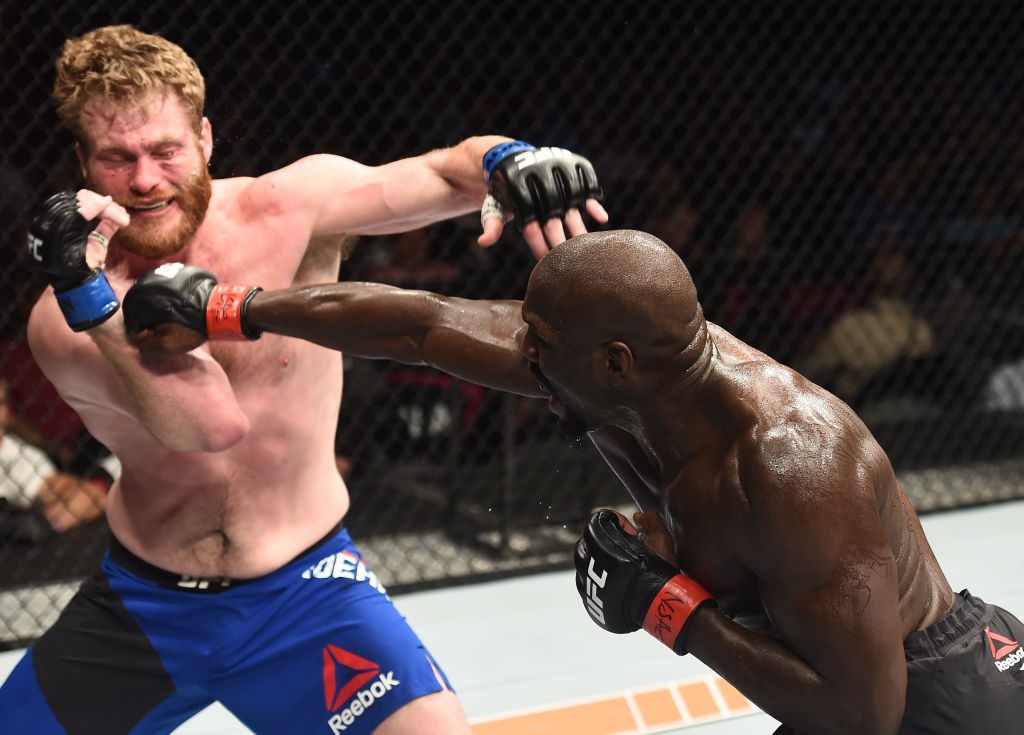 After losing original opponent Steve Bosse to injury three days ago, light heavyweight contender Jared Cannonier got a wrench thrown into the works, but the Alaskan responded well in scoring a third-round stoppage of previously unbeaten Nick Roehrick.

The first impression of the late-notice newcomer was that he had a steel chin and plenty of toughness, as he took a series of flush shots from Cannonier and stayed in there. That didn’t help him win the round, though, so it was clear that he had work to do.

But things didn’t get much better for Roehrick in the second, as Cannonier continued to tag him with power shots, nearly halting him midway through the frame.

A left kick in the third by Cannonier spelled the beginning of the end for Roehrick, and moments later, the Octagon debutant was on the ground and eating more hard strikes, with referee John McCarthy stepping in to halt the bout at 2:08 of the third round. 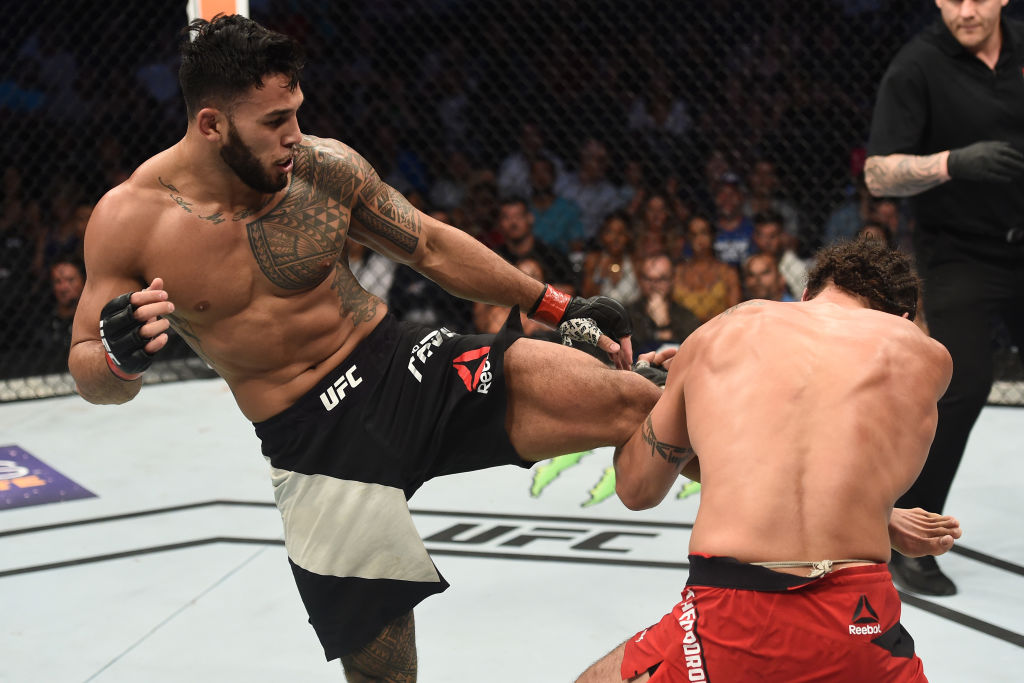 The 185-pounders fought the first two rounds at a fast pace, with Theodorou the busier of the two, while Tavares landed the harder blows. The Canadian took the flush shots well, though, and he kept firing from start to its finish, allowing him to take a slight lead heading into the third.

Theodorou scored a takedown early in round three, but Tavares smoothly made it back to his feet. Theodorou kept Tavares locked up against the fence, though, before picking up another quick takedown. As the two rose and continued to grapple, Tavares was able to turn things around and get his opponent’s back as they fell to the mat. There, Tavares looked for a rear naked choke and an armbar before another return to the feet for the closing moments of the fight. 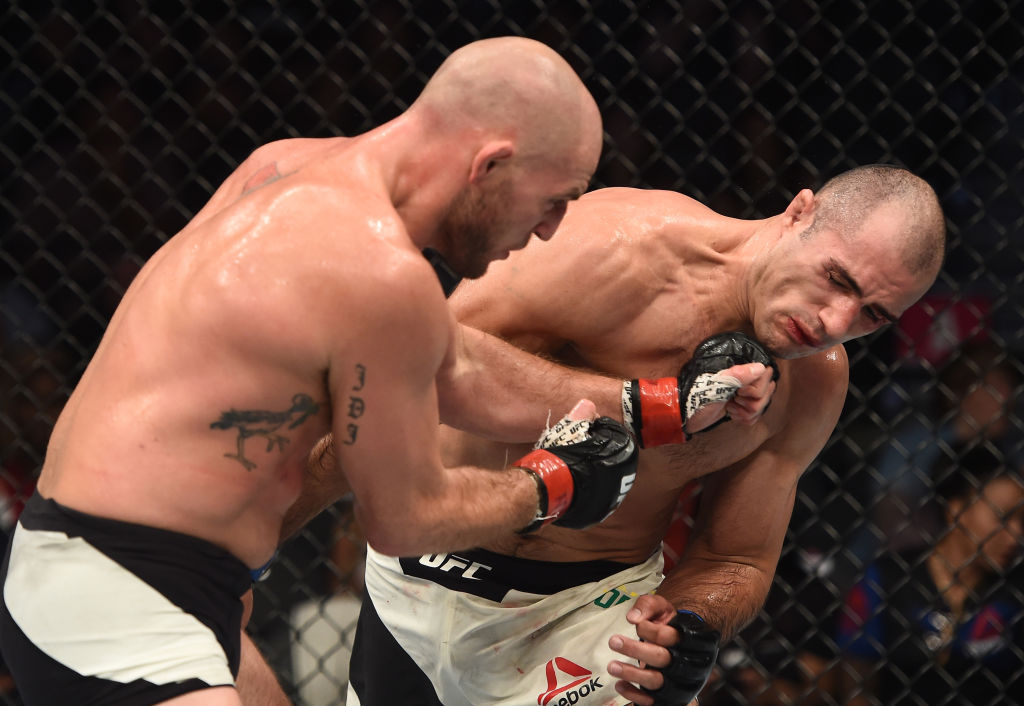 In a meeting of light heavyweight prospects, Jordan Johnson won a close, but unanimous, decision over Marcel Fortuna.

Johnson put Fortuna on the deck with a right hand in the first minute of the fight, but Fortuna wasn’t hurt and he quickly got back to his feet. From there, the action was sporadic, with Johnson getting a brief takedown and Fortuna landing a hard uppercut being the most notable moments.

Fortuna began landing more frequently with his bombs, but just when it looked like he was going to take over, Johnson would roar back with a hard punch of his own, and a late takedown may have allowed the Californian to take the round.

Johnson took that momentum into the final frame and while it wasn’t a fast-paced round, he was the busier of the two, and that was enough to get the win.