Tavares returns to where it all began, now as a UFC headliner

Eight years after making his UFC debut at the same venue, on a similar card, Brad Tavares returns to The Palms in Las Vegas on Friday evening for the first main event assignment of his career.

It’s a full circle moment for the Hawaiian, one of just two competitors from Season 11 of the long-running reality TV competition still on the roster. After 16 Octagon appearances and a dozen triumphs inside the UFC cage, the middleweight stalwart finally gets the chance to see his name on the marquee and be the last man to make the walk to the cage.

But while he recognizes the cool synergy of his impending fight, Tavares is approaching Friday’s contest the same way he would any other matchup.

“Don’t get me wrong, I’m super-grateful to have this opportunity and be headlining,” said the 30-year-old, who squares off with rising star Israel Adesanya. “I made my UFC debut in the summer of 2010 right there at The Pearl on The Ultimate Fighter Finale, so it’s coming around and coming back. Here I am going from one of the contestants on the show to being the headliner of the card, so that is pretty cool, but I don’t like to buy into it too much.

“I don’t want to add any extra stress, pressure, whatever it may be. I go about it like it’s business as usual. I’m very grateful for the opportunity, but this is just another fight. That being said, every next fight is the biggest fight of my career.”

That nonplussed attitude about headlining extends to his thoughts on facing Adesanya and being viewed as the “B-Side” of this matchup by many fans and pundits that have become enamored with the former kickboxer. While Tavares is just now getting his initial opportunity to headline an event after nearly a decade on the roster and a dozen triumphs inside the UFC cage, Friday’s contest will be just the third time his 28-year-old opponent competes on the biggest stage in the sport.

But after dazzling in the cage and on the microphone in his debut win over Rob Wilkinson in February and maintaining his pristine record with a split decision victory over Marin Vettori on FOX in April, the charismatic and compelling New Zealander is getting an express trip into the spotlight, with Tavares being tabbed as the next test Adesanya needs to pass in order to gain entry into the Top 15 of the middleweight division.

“Earlier in my career, I was on a five-fight win streak and then I ended up going 1-3 in four fights,” recalled Tavares, who has earned four consecutive victories heading into Friday’s showdown with “The Last Stylebender.”

“Now here I am riding another four-fight winning streak, so I’m going to just keep doing what I’ve been doing – doing my thing, believing in myself, believing in my team and my training, getting better every time and going out there and showing it.

“I felt that he doesn’t deserve the fight, but a lot of it is because I wanted another fight,” he said regarding Adesanya’s rapid climb up the divisional ladder and quick opportunity to headline an event. “I was eyeing a bigger name, somebody who would put me one step closer to a title shot. (Michael) Bisping was the man I wanted, he’s retired now, so props to him, so Adesanya was next in line and I’m not here to pick and choose my fights.”

Though Tavares doesn’t allow himself to get too caught up in headlining for the first time or the full-circle nature of his return to the spot where his UFC career started, the two things that do get the Las Vegas resident fired up are the continued emergence of Hawaiian fighters in the UFC and the resolve and camaraderie shown by his teammates at Xtreme Couture in the wake of the passing of the team’s head coach, Robert Follis.

While obviously very different situations, the two intersect this weekend, with Tavares being one of several Hawaiian fighters that will competing inside the Octagon over the next several weeks and part of a large group athletes from the Las Vegas gym that have been getting ready for battle over the last month.

“For a long time, I felt like I was representing Hawaii by myself in the UFC,” said Tavares, who was born in Kailua. “Then slowly it started. You had Max (Holloway), Yancy (Medeiros), Dustin (Kimura) – all these guys that you have now and it’s 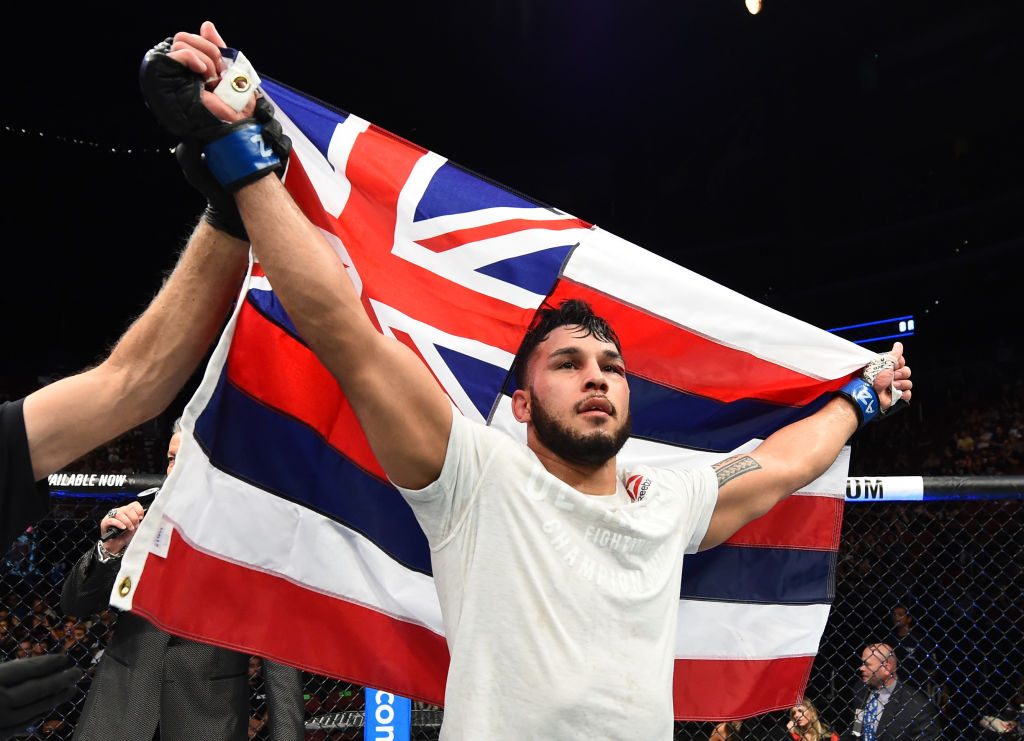 great. Hawaii is being represented to the fullest.

“We have a champion from Hawaii and I’m sure we’ll see more champions from Hawaii. It’s a great time for Hawaiian MMA and to be a Hawaiian fighter and fan.”

As for things within the long-time Las Vegas training outpost, Tavares was a little surprised to realize that it has already been six months since Follis’ passing, but acknowledged that losing the highly respected coach brought everyone in the gym closer together and said that having so many teammates getting ready to compete within close proximity to one another has created a positive energy with the gym.

“It was a very hard time for us as a team, but I think it pulled us together tighter,” he offered. “We had a little sit-down after everything came to light and one of the things that was brought up was, ‘We’re a team and if you ever feel like you’re alone, you’re not. You always have your teammates. We might not all be the best of friends and hanging out every single moment, but at the end of the day, you’re my teammate, my brother, my sister and I want to be there for you.’

“That’s something we took away from that, and moving forward we just really want to represent Follis, make him proud and I think we’re doing that. It was very tragic for us, but we took all the positives we could from that moment and we moved forward well.

“It’s been amazing,” he added in regards to the crush of activity taking place inside the gym. “The vibe in the gym has been so good, so positive with everybody getting ready for fights and being on the same track.”

And this weekend, he intends to channel that energy into his performance, deal with Adensanya and continue his steady, silent march towards the top of the middleweight division.

“I want to get to that gold, to that strap – be the middleweight champion – and this is the next guy in line. I’ll go out there, beat him and then on to the next one.”