Tavares a Nightmare for Hometown Heroes 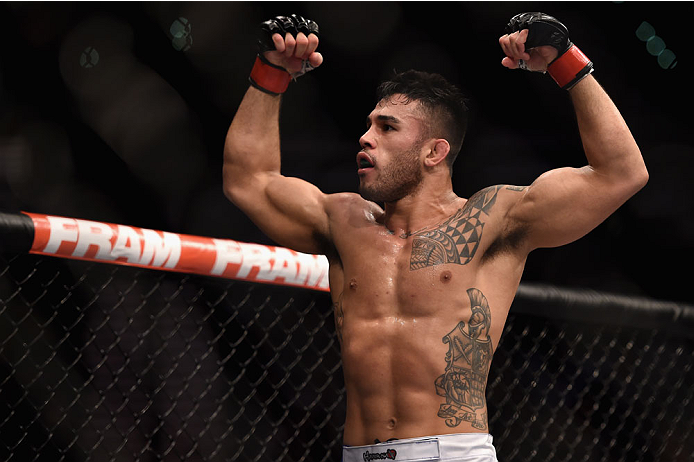 He doesn’t choose where the Octagon goes, but when UFC middleweight Brad Tavares is inside it - he controls the action.

“Fighting in some guy’s backyard is nothing new to me,” Tavares said. “I fought Riki Fukuda in Japan, I fought Tom Watson in England, I fought Tim Boetsch in Maine, I fought Yoel Romero in Florida. I go to all these guys’ backyards and fight them in their hometowns. It’s nothing new to me. I just can’t wait for the UFC to finally come to Hawaii and someone can come fight me in my backyard.”

For the fifth time in his UFC career, the 27-year-old Hawaii native will travel to his opponent’s backyard and take him on in front of a partisan crowd, as he heads to Australia to tangle with The Ultimate Fighter Smashes winner Robert Whittaker in a co-main event bout this Saturday (Sunday Australian time).

Both of these exciting strikers will be riding high on confidence coming into this matchup after recent success inside the Octagon. Whittaker earned a stoppage win in his debut at 185 pounds against Clint Hester in November. Meanwhile at UFC 182, Tavares completely shut down former Strikeforce welterweight champion Nate Marquardt by keeping the seasoned veteran at the end of his punches and kicks and denying his opponent any takedowns.

“That first jab he threw, I knew it was my night,” Tavares said. “I could tell from the speed of it and the way he threw it - I just knew. I felt really sharp and I stayed sharp throughout the whole fight. I didn’t ease off at any point. You see guys do it and I’m guilty of it too - admiring my own work. But I knew with Nate. I’ve been watching Nate Marquardt since I was in high school. I’ve been a fan of his for a long time. And I’ve seen people think they have one up on him and then they lose because he’s a dangerous guy. I knew I had to stay sharp from the first bell to the last and that’s what I did. I listened to all of my corner’s commands and I did everything they told me to do and that’s what I was really happy about.”

Improving his pro record to 13-4, including eight wins inside the Octagon, The Ultimate Fighter 11 alum showed off the offensive and defensive skills he’s used time and time again to crack the top 15 rankings. As a protégé of K-1 kickboxing legend “Sugarfoot” Ray Sefo, Tavares delivered hard jabs and crosses to Marquardt’s face and drilled stiff kicks to the veteran’s lead leg at will to nearly double his opponent’s significant strikes landed. As a proud member of the Xtreme Couture gym, Tavares used his wrestling to stuff all seven takedown attempts by Marquardt, who has the fifth most takedowns in the division’s history.

Coming up on his five-year anniversary in the UFC, the sky’s the limit with Tavares. Living and training in his adopted hometown of Las Vegas, Tavares is a young man with a lot of Octagon experience and a sturdy head on his shoulders, with a devoted camp and coaches supporting him as he climbs the rankings.

“It’s about growing,” Tavares said. “It’s about working to get better and not being complacent where we are. I know that I have much more to learn and gain. I know Ray knows that as well. We both know that I can grow a lot more and I can learn a lot more and I can become a better fighter. As long as we’re on the same page, we will never stop growing together. He’s been doing this forever. He has so much more to teach me and so much more to offer. On top of that, the things I have learned we are sharpening. I think when fighters feel they have nothing more to learn and they lose that drive to want to learn something new - that’s the downfall in any fighter. As long as you can humble yourself and really know that you can still grow - which I know I can - I think you as a fighter will continue to be successful.”

Up next, Tavares flies to the “Land Down Under” for a clash with New Zealander Whittaker. After going 3-2 in the UFC at 170 pounds, Whittaker decided to forego another big weight cut and try his hand fighting a middleweight at UFC Fight Night: Rockhold vs. Bisping. Like every other bout at that famed event, Whittaker scored a finish, halting Hester in the second round of a bout that earned the pair a Fight of the Night bonus. With 11 of his 13 career wins by stoppage, Whittaker likes to keep the fight standing until he can drop the hammer on his opponent and then dive on for whatever finish comes first.

“I was excited for the matchup,” Tavares said. “I’ve been watching this kid Whittaker. He has something of a name, he’s won The Ultimate Fighter and he’s a really tough kid. I like the way he fights. He came up to 185 and got himself a victory. That was impressive. And Clint Hester was on a bit of a roll too. Here comes Whittaker from 170 to 185 and he put a stop to that and I was impressed. Everyone knows what he prefers and it’s what I prefer - the striking game. But we’re mixed martial artists, so I’m ready for whatever. I’m going to fight the hardest to implement my game plan. If I want to keep it striking, which is usually where I want it to be, then I will keep it striking. If I want to take it to the ground then I believe I have the skills to get it there. I’m happy with the matchup. I do have some friends in Australia and, hopefully, some fans. I’m excited to get down there and take care of business.”

This weekend at UFC Fight Night: Miocic vs. Hunt on UFC FIGHT PASS, two hard-hitting middleweights will collide in the co-main event as Tavares takes on Whittaker. “I’m going to go out there to put leather on his chin and put him away any way possible,” Tavares said. “I am there to get into an exchange. He’s a gunslinger as well, so it’s going to be a really fun fight.”