Tatsuya Kawajiri: The Crusher is Here

"I am not afraid of any featherweight fighters and I am really looking forward to fight those top guns in the featherweight division." - Tatsuya Kawajiri 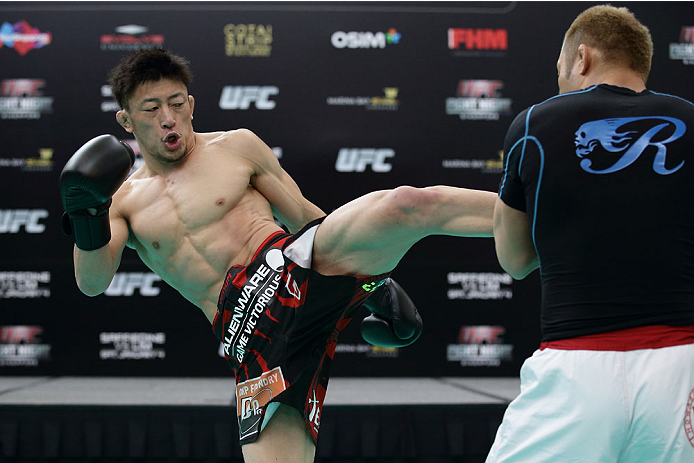 Like so many children in Japan, Tatsuya Kawajiri’s sporting dreams had nothing to do with left hooks and armbars, but diamonds and homeruns.

“When I was a kid, my dream was to become a professional baseball player,” he said through translator / manager Shu Hirata. However, I don't think that dream was possible.”

So despite playing through elementary and junior high school, Kawajiri drifted from the baseball diamond and into track and field, where he began to develop the work ethic that would serve him well in later years.

“I learned that putting effort in would make me better when I began doing track and field,” he said. “When I was playing baseball, I didn't know anything about ‘effort.’”

He didn’t know much about fighting either until, as a 19-year-old, he saw the 1997 K-1 Grand Prix semifinal match between Ernesto Hoost and Francisco Filho.

“I was there, in the cheapest seat farthest from the ring, so from where I was, those fighters were just about the same size as my fingernail,” said Kawajiri of the fight in the enormous Tokyo Dome. “However, I could still feel this sense of tension from those two fighters. Then, I realized the power of Kakutougi (combat sports). I felt truly amazed and just wanted to try Kakutougi myself.”

It was in MMA that Kawajiri found his home, and even though his mother didn’t approve (“she really didn’t like seeing my ears getting deformed”), he wasn’t about to stop. Turning pro in 2000, “The Crusher” rapidly made a name for himself in Shooto, and by 2005 he was establishing himself as one of the top lightweights in the world in PRIDE and then DREAM. In one particularly memorable bout, he fought and lost against another once-aspiring ballplayer in Takanori Gomi. Would he have wanted a rematch on the baseball diamond?

“Unfortunately, I feel even in baseball Gomi would have beaten me,” he said.

There would be plenty of victories though, over the likes of Drew Fickett, Josh Thomson, Gesias Cavalcante, Chris Brennan, and Yves Edwards, and speculation soon began about how Kawajiri would fare against the UFC’s best. That didn’t happen, though he did fight his second of two bouts against Gilbert Melendez in Strikeforce in 2011 (“El Nino” won both bouts).

And while UFC fans were beginning to become resigned to Kawajiri not ever fighting in the Octagon, the Ibaragi native kept rolling on, eventually moving down to featherweight in late 2011. At 145 pounds, he has looked better than ever, winning four straight bouts that include wins over Joachim Hansen and Michihiro Omigawa.

“In the featherweight division, my opponents are a bit smaller, so in terms of physical strength, I no longer have to deal with a disadvantage,” he said. “And against fighters in this weight class, my physical strength became very effective. Right now, I think about my condition all the time, and I set a plan for my weight cut, therefore I can always train and fight in very good condition.”

What the move to featherweight has also done is seemingly invigorate the career of the 35-year-old, a veteran of 41 pro fights.

“You always have to try to enjoy training,” he said. “I really like Kakutougi and I think about it every day. Every morning when I wake up, I feel pure and head to training. That is just a part of my life.”

That part of his life took a turn late last year when it was announced that, at long last, Kawajiri was coming to the UFC. Originally scheduled to face Brazil’s Hacran Dias this Saturday in Singapore, an injury to Dias brought in unbeaten Sean Soriano as a replacement.

“He is young and he is on a roll,” said Kawajiri of his opponent. “He is undefeated, so he has momentum, and I was the same when I was young. I couldn't even picture myself losing a fight. I had nothing to fear and nothing to lose. And I think Soriano will be coming at me in that kind of manner.”

That’s just fine with Kawajiri, who has seen it all in the fight game over the last 13-plus years. Now it’s time to show just what he’s got to the UFC faithful and his peers at 145 pounds.

Get ready. “The Crusher” is here.

“I want to become the UFC featherweight champion,” said Kawajiri. “So whoever I have to beat to get there I am going to have to crush all of them. I want the UFC fans to enjoy the Tatsuya Kawajiri way of life.”